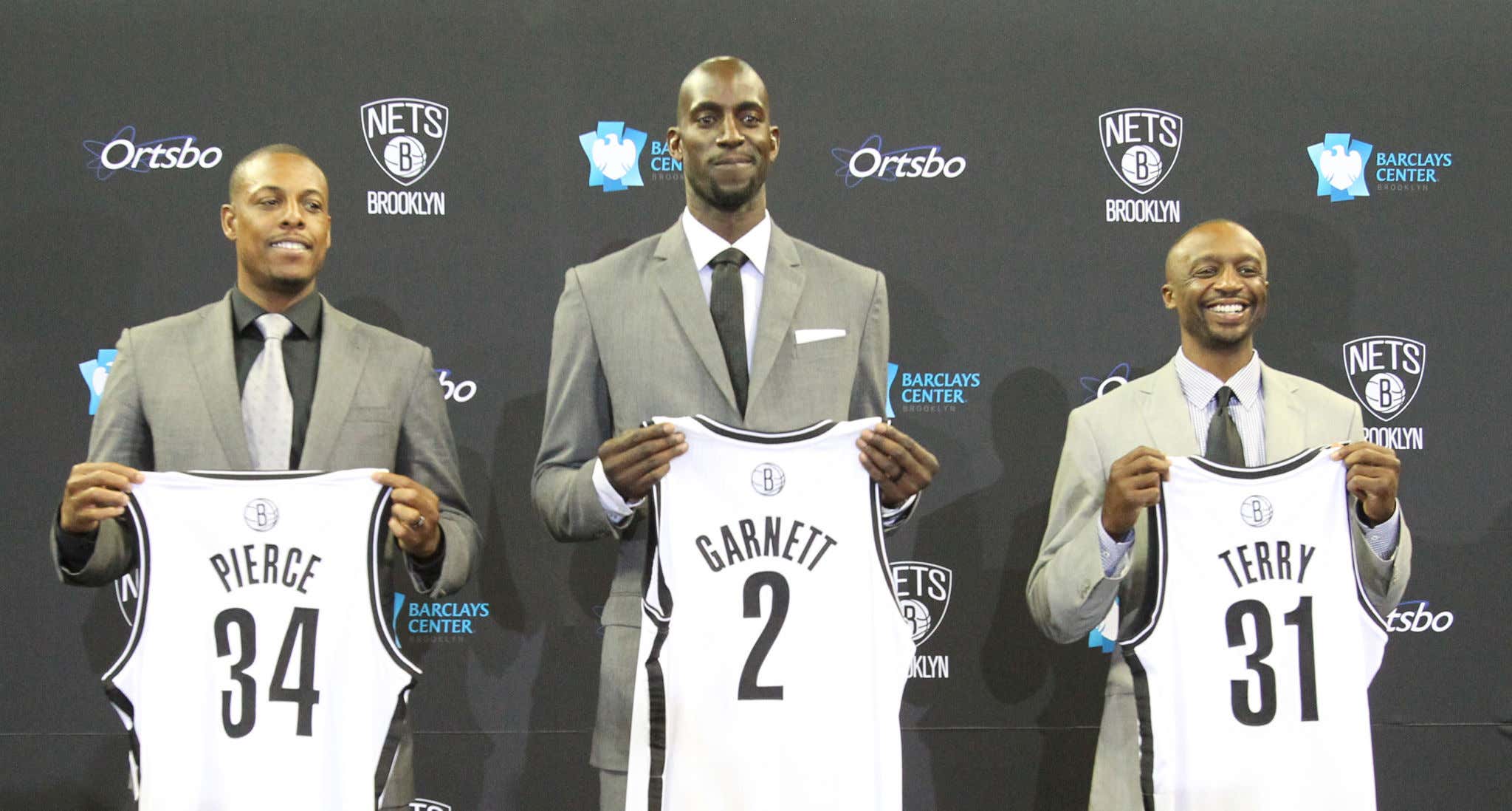 Ah yes, how could we forget that on this date seven years ago Danny Ainge pulled off his second best trade as GM of the Boston Celtics. The first obviously was mainly due to this buddy giving him Kevin Garnett for like 65 cents on the dollar (Big Al was legit though, deal with it) but aside from that, no trade in Ainge's tenure at least in my opinion has had a greater impact on this franchise.

I'll be honest, I never thought I would see the day where Paul Pierce didn't play for the Celtics. It was one of the weirdest things I've had to witness in my 33 years on this planet. Seeing Garnett move on hurt, but it's not like he was a career Celtic. Sure he was a gigantic factor in why they won the 2008 title and he embraced being a Celtic like we all dreamed he would, but that didn't hurt as bad. Jason Terry? Whatever. Great guy, but I'm still a little bad about his Celtics tenure. Hit a three for me one goddamn time.

It's important to remember the context of this trade too. After the 2012-13 season, it was pretty clear Danny Ainge needed to smash that rebuild button. The team went 41-40 (81 games due to the Marathon bombing), they had the 24th ranked offense and 16th best net rating. It wasn't pretty. They then lost in 6 games in the first round to the goddamn Knicks including losing TWO games at home. We all knew the writing was on the wall in some way, we just didn't know how. Then we got the news. Ainge had traded his two superstars at the end of their prime for BKN's

as well as Kris Humphries, Kris Joseph, Gerald Wallace, and Keith Bogans. In other words, they traded for the picks. But this trade also gave us one of the funniest introductory press conference photos I've ever seen this team have 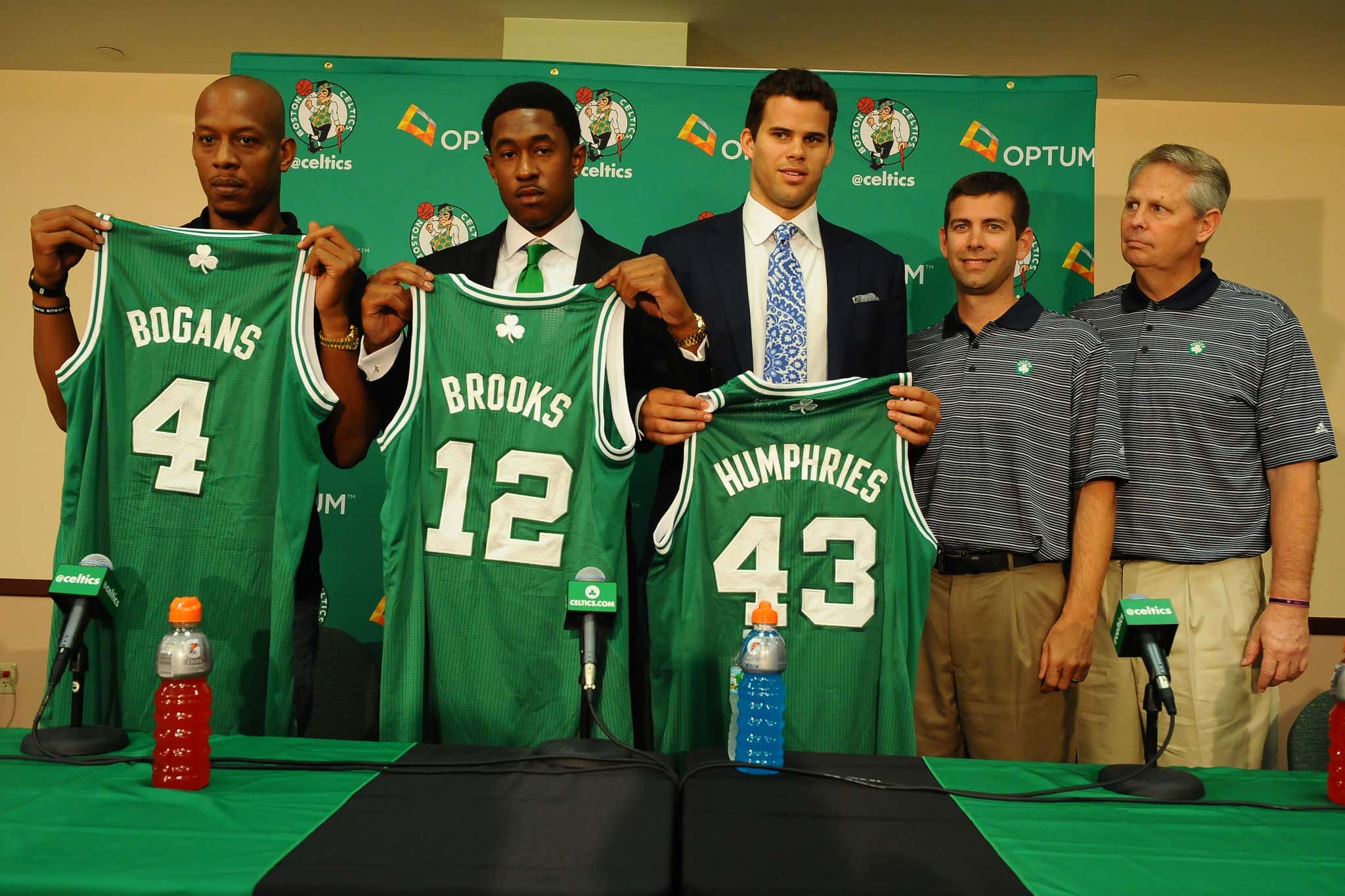 That's the look of guys going from a "title contender" to a team that was in full rebuild mode and had just replaced their championship winning coach with an unproven college guy named Brad Stevens. You'll never believe this but the Celts went 25-57 that year (enter Marcus Smart).

So how did those picks age?

2014 first round pick: James Young (jury is still out, just needs an opportunity)

2016 first round pick: Jaylen Brown (starter and borderline All Star)

2017 first round pick: Jayson Tatum (All Star and potential All NBA player)

2018 first round pick: Kyrie Irving (disaster like you read about)

I'd say Ainge batted .500. Maybe you're someone who would consider that 2018 BKN pick a win because it landed him Kyrie, but as someone who didn't like the trade when it first went down and then when you factor in how that tenure went and ended, I'm going to say Ainge fucked that one up. He made a bet that Kyrie could be that alpha franchise superstar/leader to get a team over the hump and he was dead wrong. Who knows, maybe he could have used that pick on Shai Gilgeous-Alexander, or maybe someone like Michael Porter Jr.

In terms of team success, the rebuild has been pretty good all things considered. A lot of people who hate the Celtics will scream "ZERO RINGZZZZZ" like that's supposed to bother me. Uhhh I went 21 years without seeing the Celtics win a title. I lived through the 90s with this team. You think only being 7 years post trade with no title bothers me? Winning around 50 games and making it deep into the playoffs since that 2013 reset is not exactly a negative. The goal of those BKN picks was to hopefully find one or more franchise guys. Ainge has that with Jaylen and Jayson.

I look at it like this. It took Ainge just three seasons after this trade to more than double their win total and make their first ECF. Since that season, the Celts have consistently been one of the best teams in the conference. They enter this playoffs with the second best title odds in the East. The rebuilding part is over. Now it's the hardest step, which is ya know....actually winning it all. Time will tell if that ever happens, but from a rebuild standpoint Ainge did fairly well with what he snagged from the Nets.

Think of how many teams are STILL rebuilding after spending decades in the lottery. You never know how that shit works out. We've seen Brad Stevens go from a giant unknown to one of the best coaches in the league combined with two of the lottery picks which are always unknowns turn into two studs. Had they moved the 2018 pick for a better star, who knows maybe they already have that title.

But none of this happens if Mikhail Prokhoro never bought the Nets in 2010 and was desperate to make a splash by the summer of 2013. The Nets had won 49 games the year before but came up short in the playoffs. They needed star players and Pierce and KG were two huge names. It obviously never worked out with the Nets never getting past the second round, and before they knew it they were rebuilding. As you can see, it's been pretty tough

Much like Ainge did, they too feel like Kyrie Irving is the type of star who can get them over the hump. Year 1 results didn't exactly go as planned.

All in all, between the KG trade, the Nets trade, and the Isaiah trade, Ainge has had some pretty impactful/franchise altering moves. But none of what we are currently experiencing happens without this BKN trade. I think it's fair to say that myself and Celtics fans everywhere will be forever grateful that Billy King took the bait and allowed us to have these two in our lives for the next decade