Lets take a minute to allow all the Eli haters to choke on their bile while disparaging a two-time Super Bowl MVP.

Actually you know what? Fuck'em. They've been slinging barbs and insults at our sweet baby boy for years because of the occasional slack-jawed face or some hogwash memorabilia lawsuit that got settled before it even went to court. Eli Manning is clearly not only a great player but he's apparently an even better person. In addition to those two Super Bowl MVPs over the greatest sports dynasty we will ever see, Eli racked up the Walter Payton Man of the Year Award

The Bart Starr Man Of The Year Award

I don't think there are any Man of the Year awards named after former players from NFC North teams, so Eli moved on to the Good Guy Award, which actually trumps Man of the Year in my mind. You don't have to be a good guy to win Man of the Year. Time gave their Man of the Year Award to people like Stalin and Hitler. But as someone that has been called a good guy a few times in my life, I can confirm that winning the Good Guy Award is as high a compliment as you can pay someone in the gentleman game. And considering a bunch of the people that gave him that award also vote with their hearts for the Hall of Fame, you can clear you calendars for when Eli adds a yellow jacket to his wardrobe and I add another trophy to this graphic that is getting more crowded by the day even though Eli retired months ago (which already included him being the first induction into the Human Hall of Fame even before he won the Good Guy Award). 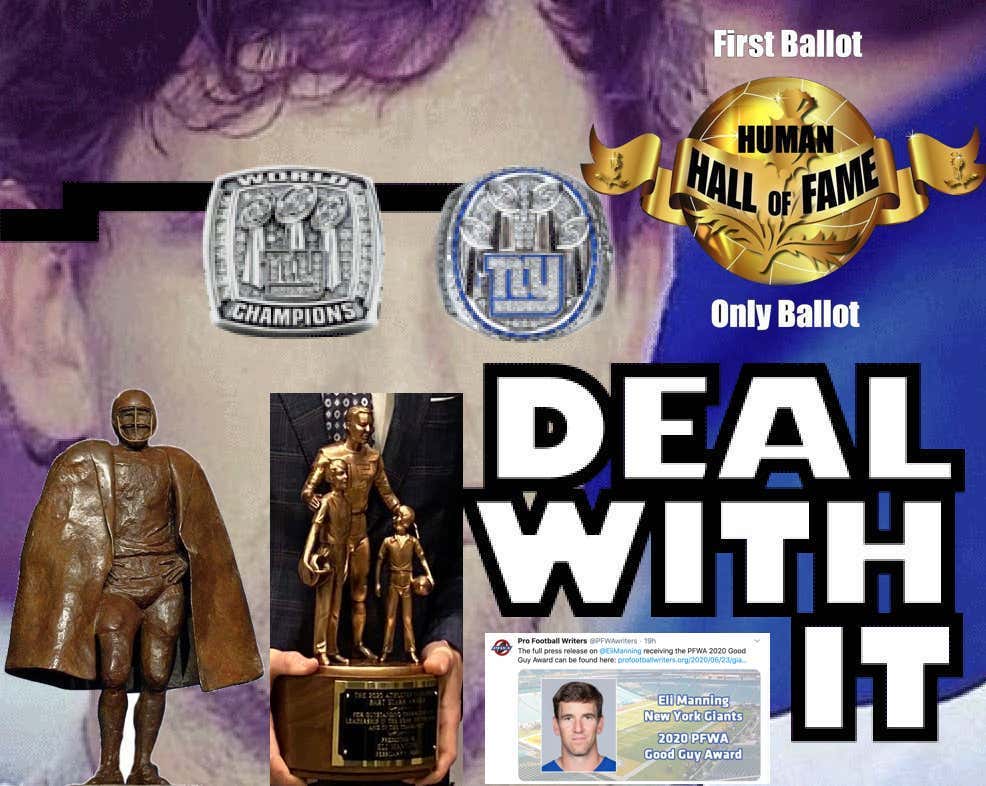 P.S. According to the Clemias Sports Bureau, Eli Manning is the first NFL player ever to win two Super Bowl MVPs, the Walter Payton Man of the Year, the Bart Starr Man of the Year, and the PFWA Good Guy Award. Suck on that, haters!