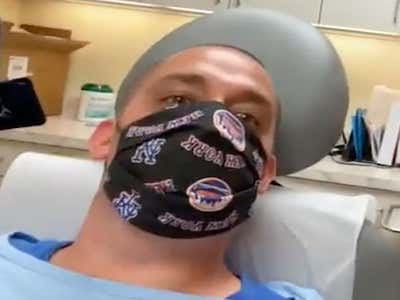 Yup, that's me. You're probably wondering how I ended up in this situation. Well I threw a couple of kids into my wife over the last 5 years or so and after having my brain reduced to rubble by them, realized that if I created another life I would have to take my own because I am barely surviving with two little monsters running wild.

However, as someone that has come out on the other side of the blade, I thought I would pass along the goods, the bads, and the uglies of this very safe and very recommended procedure (I'd rate it 5 stars on Amazon if I could and I take my Amazon stars VERY seriously) for any fellow Olds like myself that are #done with kids and still want to roll around with their wife a couple more times before deaths cold embrace touches us.

- For all the jokes and hoopla about getting snipped, it really isn't that bad. When I discussed my vasectomy on the podcast, I kinda wavered on the pain because I knew my wife was listening and she would kill me if she knew I milked this surgery. However, I know she only reads my blogs when she cares about the subject matter and based on our time together, there are very few things she cares bout less than my private parts, especially now that she has extracted our children from there.

- You get to sit inside with a bag of frozen veggies between your legs and whatever you want on the TV screen. I was supposed to have this procedure done right as the Major League Baseball season was underway and the Final Four was supposed to tip off, but bitch boy covid put those plans into a blender real quick. I did finish up Better Call Saul but I refused the frozen veggies just because my body naturally rejects them.

UPDATE: I put peas between my legs while writing this blog and the results have been tremendous.

10/10, would recommend to others. Not sure if sitting on frozen carrots will be better or worse. Will give my review tomorrow.

- If you have decent insurance, it SHOULD cover it. I think. I'm on my wife's insurance which I believe is better than Barstool's insurance. That may not be saying much since we've only had insurance for a hot minute here. Nonetheless, I'd probably pay infinity dollars to make sure I never had another kid.

- Speaking of Barstool, I have to get some sort of raise or bonus or gold star on my performance review for not only writing and podcasting about such a personal topic but also capturing it all on video? During a global pandemic no less!

Say what you want about all the talented people here. But I haven't seen anybody throw their entire vasectomy out there for personal consumption. #SnipBySnip

- No more pull out and pray (emphasis on the pray since I now have experienced what goes into having a new baby). No more condoms. No more birth control for the wife that causes her hormones to rage like Dave Portnoy after he was wronged by someone. I get to fire heaters during sex now, which is great and all until I realized I'll probably have sex at most 6 times the rest of my life. But even so, those 6 sleeps will be the most peaceful sleeps I have ever gotten. At least until one of my kids wakes me up in the middle of the night.

- It is literally doctors orders to crack stick and rub out 20 or so loads over the next 3 months to make sure my reservoir of swimmers is depleted. As a blogger that works for a smut company from home, that number could probably be hit in 3 weeks if I wasn't quarantined in my house with my family.

- While vasectomies can be reversed, it is apparently not the easiest thing in the world and could be costly. I am putting this in the good category since I am a parent of two on a blogger's salary that would never pay good money to put my poor ass back in the jackpot.

- The only painful part of the actual procedure is getting the numbing agent injected directly into your balls, which to be fair is just a slight pinch that happens a couple of times. It really isn't all that bad but it still is getting a fucking needle jammed into your sack.

- Even though you are numb the entire time, a guy you barely know rummaging through your scrotum like a raccoon picking through trash is weird as fuck. Speaking of which, do you remember the raccoons from The Great Outdoors? They were awesome! (I can ask this questions since I'm pretty sure mostly old idiots like me that remember this gem are reading this blog).

- After you are done, you get a goodie bag that is significantly less fun than the ones you used to get after birthday parties. Mine had bacitracin and maxi pads, which the nurse was nice enough to show me how to use while hammering home just how short I would make it if I had to deal with the stuff women have to deal with on a monthly let alone daily basis.

- Your balls do actually have a slight ache for a while like someone kicked you hard in the junk a few days ago and you are still feeling the aftereffects of it. Not only is it not the worst thing in the world but it's also easier than anything my wife had to deal with during her 10 months of being pregnant, 2 weeks of recovery, and year of nursing. So yeah, I'm gonna stop complaining about the Bad now.

- While I never thought of the testicles as a particularly handsome body part, it is especially gross bruised up with a tiny incision healing in the middle along the incision that shares a resemblance and demeanor with that infamous blob fish. On the bright side, they are about the size of Pedro Cerrano's in Major League II.

- You will never forget the smell of your vas deferens burning as they singe the ends to make sure the tubes do not merge back together and make you fertile again. This is by far the ugliest part of the entire procedure and the only reason I'm happy Large didn't stay in the operating room with me. We are pals and all but no man should smell another man's vas deferens burning unless he is getting paid good money to operate on it.

- Annnnnd that's it. The word ugly isn't even in my vocabulary right now. You know why? Because you are not supposed to blow off any, ummmmm steam, for a week after your vasectomy and like a fucking IDIOT, I went into my vasectomy with a loaded gun after forgetting to clear my pipes for two days due to the chaos with kids, work, and some dental work (Last week was my hell week). Anything I might have once seen as ugly or offputting I now see as unique and interesting. However, if it tickles my fancy enough, I cannot embrace that tickle. Now my usually pleasantly low T self has testosterone filled up to the point my eyeballs are floating in it.

Okay, I think that's enough for the Ugly.

It's been 5 days since the procedure and I'm still physically sore. But nothing compares to the mental soreness that starting over with a new kid would bring into my life. If you want more behind the scenes footage of the entire process, here is a video of how everything shook out on my V-Day with Large along with this week's Podfathers where we jump into the whole bloody matter. Also apologies for not throwing any smut in a blog about sex but I am truly struggling over here any time a stiff breeze blows my way. Shit, I just said stiff. Now I'm going down a mental smut wormhole again.