On today's Pardon My Take, Mr. Cat and Mr. Commenter welcomed on Atlanta Falcons QB Matt Ryan. It was an awesome interview, and no time was wasted as the Boston College product faced a 28-3 question right out of the gate. The trio also discussed college football in 2007, playing for Dan Quinn, and more. The quarterback was also asked to chime in on one of the hot topics during this NFL offseason: who is the best quarterback in the NFC South? With Ryan having company including Brady, Brees, Jameis, Bridgewater, and Hill, there's a lot of talent there. But Atlanta's QB is confident in his ability and the rest of his team's potential heading into this season:

Mr. Commenter: Let's get some extra ratings out of this interview real quick. Can you just guarantee us how many wins you're going to have next year?

Mr. Cat: OK, how about this, also. Let's go one step further. Would you say you're the best quarterback in the NFC South?

Mr. Commenter: Now that Jameis is gone, I love it.

Matt Ryan: Yeah, that is a fair point.

Mr. Commenter: When you were playing against the Bucs last year, were you standing extra close on the sideline when Jameis was out there, because you were like, "I know no matter what happens, something cool is about to go down?"

Matt Ryan: Listen, it was a crazy year because we see all of their games, too. You're preparing for the opponents you're going against, you're watching Tampa's tape of them going against them. So we played them in the last game of the year and I guess he had a couple of interceptions early in the game. We all knew that if he had like three or four, whatever it was, he was going to throw 30 picks. And so we go into overtime and I go out for the coin toss and we lose the coin toss and I'm going to sit on the bench. And I didn't even see it. But before I knew it, the game was over for the pick six back the other way. I was like, it's the only way that season could have ended for him. And I hope he does great moving forward. But that season was destined to end with a pick six or something like that. 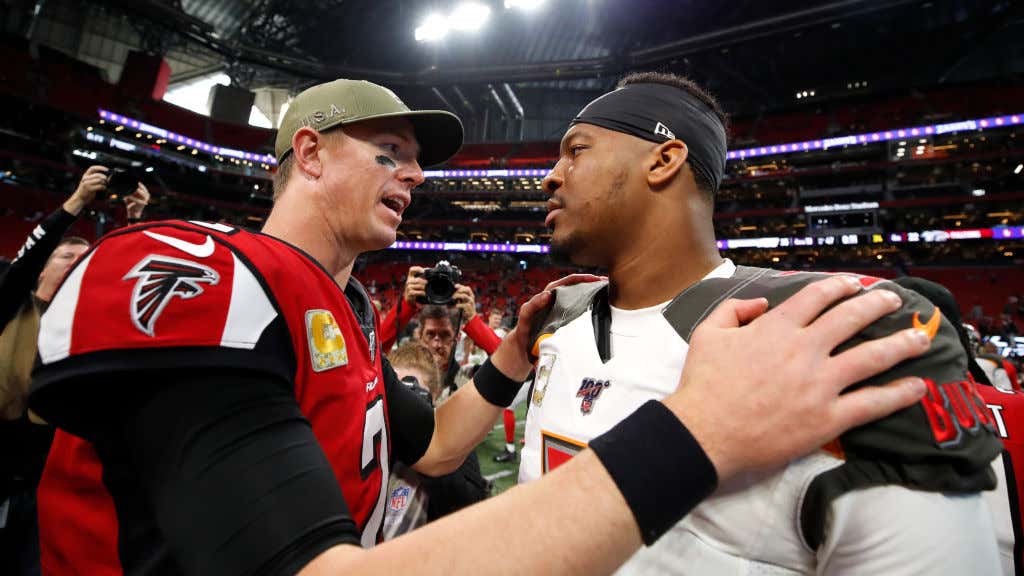 Honestly, how can you blame Matt Ryan for saying he is the best QB in the NFC South? Sure, Brady is the GOAT, Brees is a Hall-of-Famer, and Jameis is Jameis, but Matt Ryan has the confidence a QB1 should have. This divisional race is going to be something else, assuming the season continues as planned. I'm sure many folks are jealous that Ryan also had a front row seat to witnessing Jameis' 30-30 season become official. Something we will never forget.