First came the allegations that Chris D'Elia has been serial-creeping on multiple underage females like the Jeffrey Epstein of observational comics. Next we had the obligatory carefully worded denial. So it was only  a matter of time before we got the third square in a row in square in Celebrity Scandal Tic-Tac-Toe, the bad viral video.

The internet never forgets. Everything lasts forever. Tweets do. Facebook posts do. Snapchats do. And so do the reactions of accused pedophiles upon hearing that Snapchats do. I mean, get a load of his D'Elia's face when that news bomb gets dropped right into the middle of his psychological downtown. His eyebrow goes up like a cartoon supervillain finding out that Batman has foiled his evil plan. 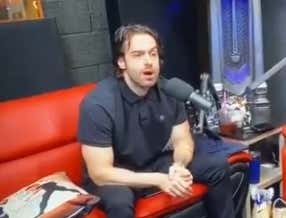 He might as well have been twirling a mustache as he stared into the middle distance trying to figure out how his carefully planned scheme could go so horribly, horribly wrong.

I say again, we should all be about protecting the victims of online predators and get them jusice, while still upholding the rights of the accused to due process. And making an exaggerated reaction to news like this doesn't necessarily mean he's anything more than an alleged stalker of teenage girls. But if you were defending him in court you would NOT want this video being seen by a jury. Because that is the look of a man going through his mental Rolodex trying to assess how much damage saved Snaps could do to him. D'Elia is still innocent until proven guilty, of course. But this video is very clearly not going to do him any favors in the court of public opinion.

Just like Jason Sudekis' Satan said, preserving your worst moments forever is why he invented the internet.