Original - Chaka Khan - Through The Fire

Just an all-time classic original by Chaka Khan taken by Kanye West and flipped into his debut smash.

Kanye had of course already been nominated for a couple Grammy's at this point in his career, and had achieved massive success with his production on Jay-Z's The Blueprint.

He also had floated around a VERY underrated mixtape titled "I'm Good". But "Through The Wire" was his official coming-out party.

A little backstory on the track's title and meaning -

In October 2002, Kanye was hard at work in LA working on albums for Roc-A-Fella recording artists Beanie Sigel, Peedi Crakk, as well as The Black Eyed Peas. One evening, after leaving the studio around 3 AM, he nearly died in a car accident when he was cut off by a car, ran head-on into traffic, and collided with another car head on in his Lexus. He was rushed to Cedars-Sinai Medical Center, (as he references in the song, "the same hospital where Biggie Smalls died,") and had his jaw wired shut during reconstructive surgery. Two weeks later he recorded the song with his jaw still wired closed. That's why it sounds like he's mumbling.

When asked about the song Kanye replied -

Well, the only thing this accident's is saying is, "I am about to hand you the world, just know at any given time I can take it away from you." To nearly lose your life, to nearly lose your mouth, your voice, your whole face, as a rapper…and I had to be on TV! My face looks crazy to me now… But I have to just thank God for the situation that I am in… "Through The Wire" is the worst thing that could've possibly happen to me, and now it's obviously the best thing. Look how it exploded! 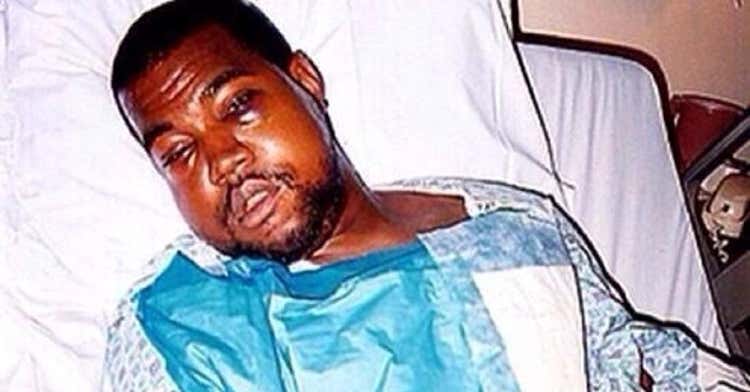 The song was originally on Kanye's  Get Well Soon... mixtape. He later re-recorded and released the song as his first single from The College Dropout.

The song and it's success played a major part in Kanye finally convincing Dame Dash and Jay-Z to let him release his own solo rap album. The rest as they say is history.

In terms of the sampling of Chaka Khan's classic, there was a lot of controversy surrounding this one.

Khan went on friend of the program Andy Cohen's "Watch What Happens Live With Andy Cohen" and laid into Kanye saying the following:

Khan recounted how West called her as he was recovering from a car accident that left him with a broken jaw, wired shut. "[West] said, ‘You were so instrumental in my healing process. I changed the words a little bit to the song but I had to eat through a wire… It really got my heart, tugged at my strings."

These conversations with West went "very differently than how the song turned out," Khan claims, adding that she was especially upset with how "Through The Wire" pitches up her sampled vocals. "I was pissed… It was a little insulting. Not insulting, I thought it was stupid. If I’d known he was gonna do that, I would have said, ‘Hell no.’”

Guess Kanye's polite little "Thank You" at the end of the song to Chaka Khan wasn't well received.

The song also mentions sample credits to Outkast's "Player's Ball" for the drums.

A sample credit to Linda Kaplan Thaler for vocals from "I Don't Wanna Grow Up, I Wanna Be A Toys' R Us Kid".

And a vocal sample for the reference to the horrible M. Night Shamalan movie Mr. Glass.