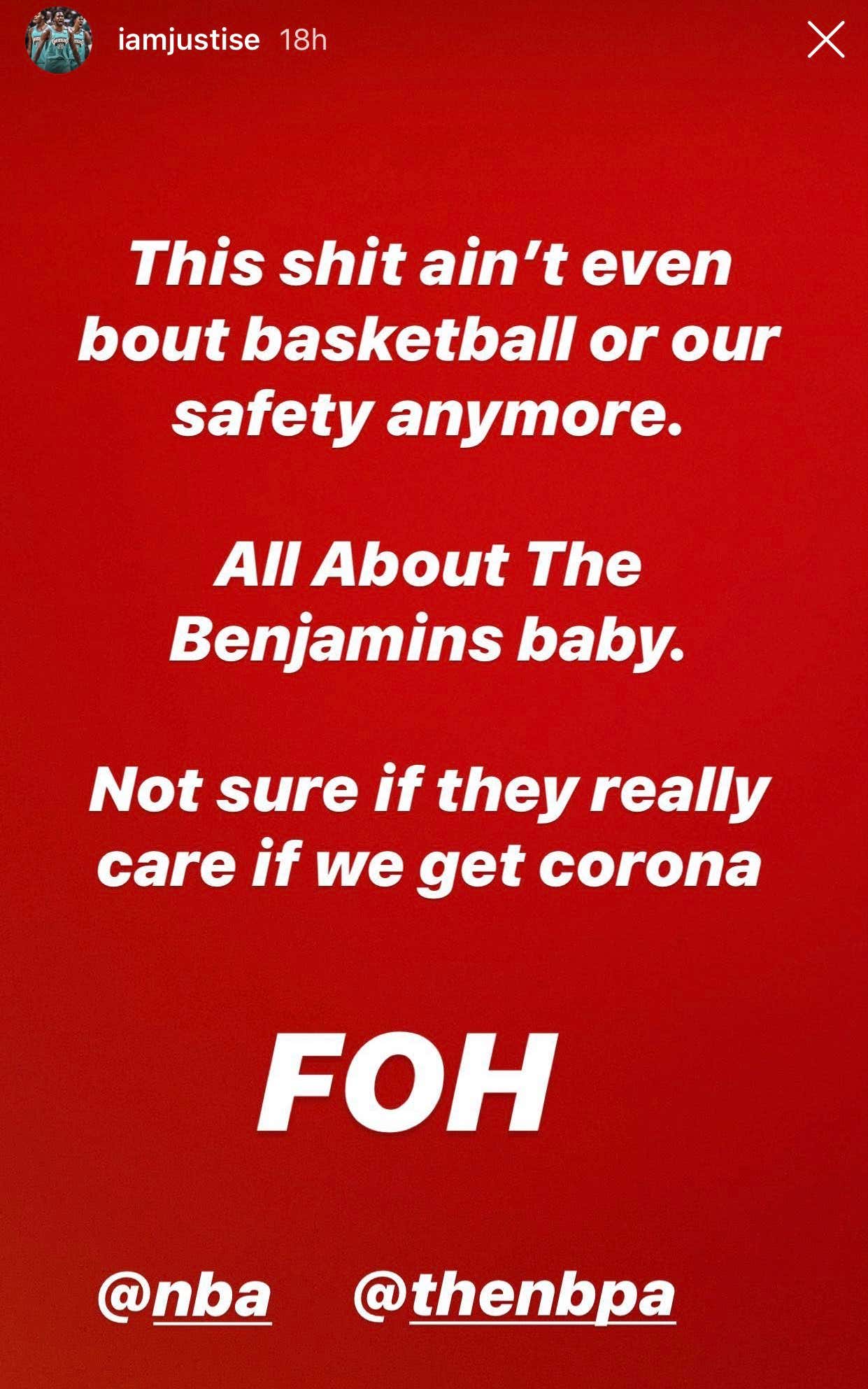 If you thought we were over the hump in terms of drama surrounding the NBA's potential return in Orlando, what the hell is wrong with you. We're not even close to being done. Not with 41 days to go. More and more players are going to voice their opinion from all sides, and Justise Winslow is the latest player to speak out. I get why he feels like there are safety concerns about coronavirus and the bubble. From what it sounds like things are starting to ramp up back again in Florida but I'm not going to spend one second trying to convince you that I've done two seconds of reading on numbers and stats or any of that bullshit. I know what I see on Twitter and I know to take that with a grain of salt. The point is, coronavirus is still very much something we have to deal with.

But here's the thing. The NBA is a private business. Of course they have financial interests in basketball coming back. Who would deny that? The thing is, the players do too. In fact you could argue they have more on the line than the owners, seeing as how the CBA could be ripped up and the owners could demand more BRI in the next negotiation. Players also haven't been exactly practicing social distancing if you take one second and scroll twitter. More and more videos/pictures are coming out of open runs and workouts.

The plan for a return is also collectively bargained. Of course there is going to be some risk that everyone has to take on because we've never dealt with something like this before. Between the ridiculous guidelines and the tracking ring you can wear, it's not like the league is saying fuck it, once you get into Orlando it's a free for all. Who knows if the plan in place is not good enough or if it's way more than needed. Not like there are a ton of pandemic examples to branch off from. There's also this. if Justise Winslow doesn't feel safe, he doesn't have to go. Not only that, but nobody would give him shit for it! Not the league, not fans, it's all good if you don't feel like it's a safe option for you. You're allowed to make an informed decision knowing what the risks might be, but at the same time the league is going to do what it can to recoup money lost because they are a business just like anything else.

It's not going to be perfect. You can almost guarantee that things will be adjusted as the time in Orlando goes on and we learn more about what the hell is going on. But what this does show you is that it's not just one or two players that have concerns. It's probably more than you think and Winslow surely won't be the last.

Now if you didn't know, Winslow is on the Grizzlies and has been hurt for a long time so I'm not even totally sure if he's cleared to play. He's played only 11 games this season and had these good showings in October

but that's been pretty much it.