Well you knew there was no way KD was going to let Perk go on TV and Twitter and say all this shit about his teammate Kyrie Irving without weighing in. And as we know, if there's one way KD knows how to do that it's through social media! Of course this is not the first time these two have had their back and forth on Twitter. A social media "beef" if you will. How can we forget about their shit talking back in January?

Hey at least Durant was brave enough to do this on his main account, so at least that's progress. This is much better than him switching to the burners just to talk shit to Perk. Plus as a Nets fan having to deal with this Kyrie bullshit every single day it has to feel good to know that Durant still has his back and isn't already thinking about getting the fuck out of BKN.

To be fair, Perk is going a little nuts about this whole Kyrie thing. He had this deleted tweet which was rather outrageous

that he tried to walk back into this

but Perk has to know once it's on the internet, it's there forever.

I'm just happy we got the last infinity stone of this Kyrie saga. You have to admit, the only thing we were missing was Durant subtweeting/RT'ing Perk. It's why the NBA in 2020 is so much fun. Many will probably clown Durant for these actions but I won't. I encourage it. We have 43 days to get through until Orlando and I'll take any type of entertainment I can get.

But wait there's more! Apparently he also called Perk a sell out on IG 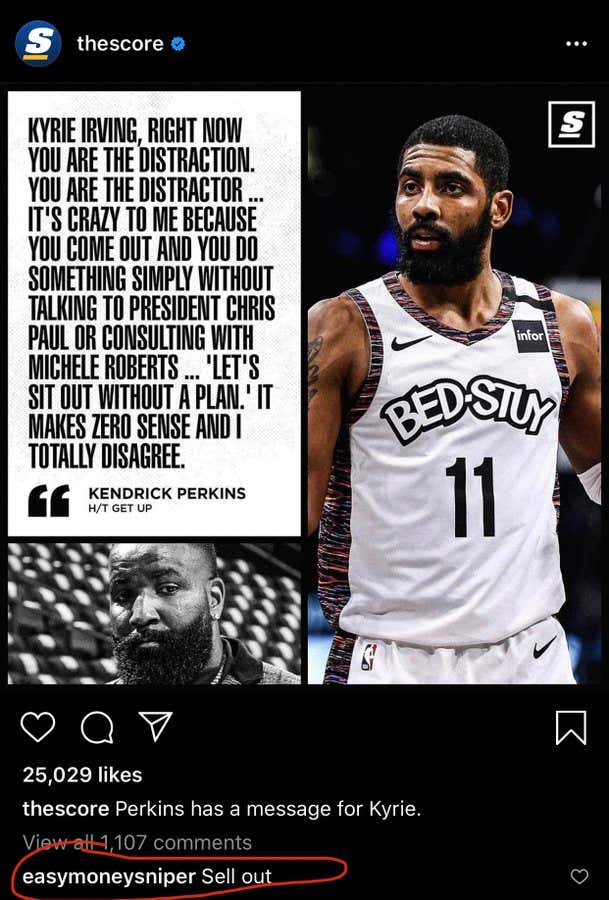 I'm sure that will go over well. Not sure Durant thought that one through completely.