It feels like it's been forever since we've had ourselves a nice little NBA Twitter quarantine debate. Maybe that's because all the days blend together in this new world we all live in, but it feels great to be back and we have ourselves a doozy of a question. The new trend on Twitter is doing these questions with a reply/retweet/like to determine the winner, and as of the writing of this blog here is out the results look 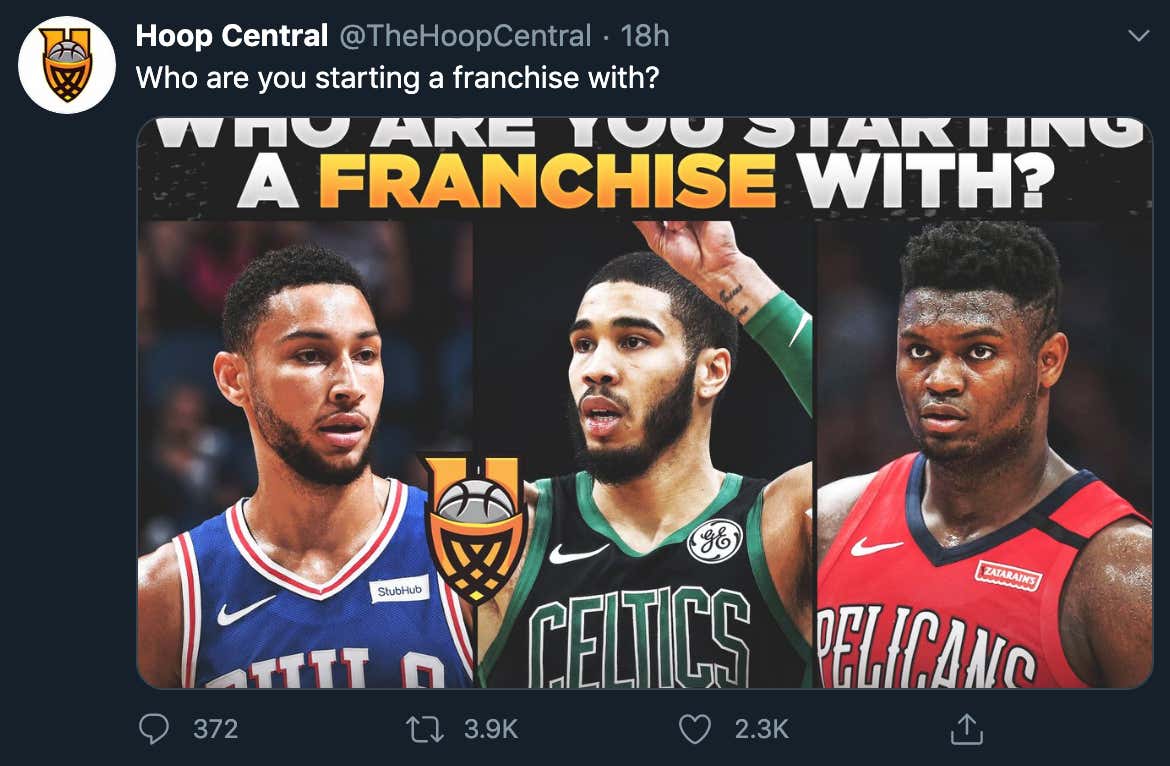 Bloodbath city, population The Process. But listen, a topic like this deserves the same breakdown we always do with these NBA Twitter debates. Let's look at everything objectively and then form our conclusion.

I understand a lot of people, myself most definitely included, like to get our jokes off about Ben Simmons inability to shoot. But what I'm also not going to do is pretend he stinks and you shouldn't build your franchise around him. There are two things that are pretty much not debatable when talking about Simmons compared to these other two. He's the best defender and best facilitator of the group and frankly it's not close. I don't care who your favorite team is, if you deny those two claims you're hating just to hate.

We're now 3* years into Simmons' career, and so far there has been no indication that a change in his offensive arsenal is coming. Sixers fans will tell you it doesn't matter because he still gets what he wants offensively without a jump shot. Everyone else with a brain will point to the lack of playoff success and how teams can defend PHI as a reason this is a problem. Unless your goal when starting your franchise is to only make the 2nd round, chances are if PHI is ever going to get over the hump teams have to respect his jumper.

If you want to select Simmons, it really depends what the rest of your roster looks like. Do you have enough shooters? Do you also employ a center who clogs the paint?

With Tatum, you have someone who is the best all around player of the three. His defense is probably a tier below Simmons, but his offensive bag is about five tiers above the other two. He's not perfect, his facilitating still has a long way to go, but what you're getting in Tatum is a legit #1 two way wing which in today's NBA is essentially the most valuable piece to any successful franchise. He's proven to be one of the best clutch players in the entire league, has shown the ability to produce even while going up against All NBA defenders.

He's also the only one of the three who should be making an All NBA team this season so factor that in however you'd like.

Now this is where I don't really agree with the Twitter results. Zion should not be that far ahead of Simmons. First and foremost his injury history and weight have to be considered. I'd say his offensive arsenal is just as raw and unproven as Simmons. The only difference I guess is that he's more willing to take jumpers/threes. But he's not a better defender than anyone on this list, you're taking Zion if you think he could actually turn into LeBron or something along those lines.

There is something to be said about the fact that he stepped right into the NBA and essentially dominated from the jump. That's encouraging. But we don't even know what he'll look like when he has to play an entire season. His 19 games were great, but they were just 19 games. I'll be interested to see how things potentially change once teams get more tape on Zion.

So for me, it's pretty simple

Tatum is the best all around two way player which the highest offensive ceiling. Simmons is the best defender/passer but definitely has his weaknesses that could hamper your franchise. And Zion is too unproven.

I know I'll be called a homer for this, but when you take a step back and look at what all three can do on the court and how the league is trending, I'm not sure how you could go any other way.