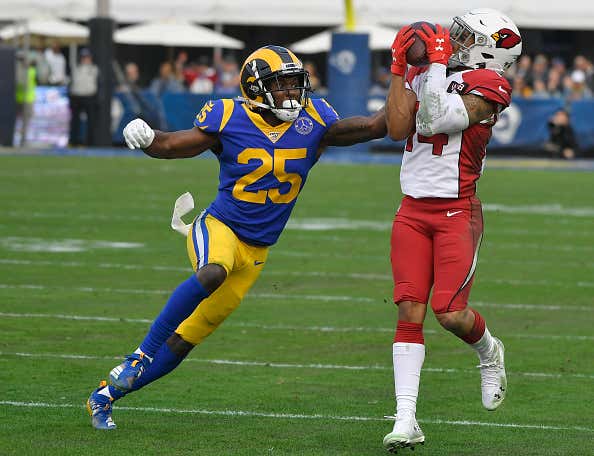 The middle of June traditionally is that time of the pro football year where the major contruction of the roster is more or less set. you've said all you can say about the returning veterans, done your profiles of all the draft picks, and so you start to look at what the carpenters call the finishing work. The fine touches around the edge of the depth chart. In my case, I've already done deep dives into the likes of UDFA rookie running back J.J. Taylor and fullback Danny Vitale. And now is as good a chance as any to drill down into a position group that was otherwise untouched from the group that struggled to produce last year, the wide receiver spot. And the new addition Belichick fished out of the free agent remainder bin, Damiere Byrd.

And I'm not alone. Part of the reason I'm doing homework on a depth guy who has just 44 receptions and less than 500 yards in a four year career is that lately, every Patriots-related site on the internet is talking about him and the unique skillset he brings with him.

Tom E. Curran has a piece about Byrd that includes a pre-draft scouting report and an assessment by someone who covered him in Arizona:

From longtime NFL draft and personnel whisperer Gil Brandt in 2015:

I asked longtime Cardinals beat writer Darren Urban what else he could tell me about Byrd.

“When he first signed right around the owners' meetings (in 2019) one fan was insistent he was worthless and wouldn’t make it onto the field,” said Urban. “But the coaches automatically liked him from jump. They loved the way he addressed his technique, his work ethic.

Chris Simms went on WEEI to say he thinks Byrd can help, calling him "one of those guys I have had my eye on ever since he came out of college. I think he is the perfect New England guy — understated, nobody knows about him. He didn’t get featured in Arizona."

And Mike Reiss reports that Byrd has been a regular at workouts with his new quarterbacks and brings an element the Pats lacked last year:

For those who believe a quarterback and pass-catcher can lay an important foundation in the offseason by working together, keep an eye on under-the-radar free-agent signee Damiere Byrd as he transitions to the Patriots' system. Byrd has been a regular at the throwing sessions with quarterbacks Stidham and Hoyer. A former teammate of Gilmore at South Carolina, Byrd is fast. And the Patriots' wide receiving corps finished 2019 as one of the slower groups in the NFL.

And I don't dispute that. Byrd has a particular set of skills. Skills that make him a nightmare for defensive backs to stay with him.

And the analytics seem to support the case that he's a legitimate NFL receiver. According to Pro Football Focus, his passer rating when targeted was 92.7 which, while not exactly up there in AJ Brown's neighborhood, is right between teammates Christian Kirk and Larry Fitzgerald operating in the same attack with the same QB. Same with his reception percentage of 71.1%. His YAC per reception was tied with Fitzgerald at 4.8. And he actually led his team with 11.2 yards per catch.

By way of other comparisons, Next Gen stats has him with an average cushion of 5.7 yards, which ties him with Golden Tate. And a targeted air yards of 9.7, which puts him between Sammy Watkins and Jarvis Landry. Obviously not the kind of numbers that will get a fella Julio Jones money. But enough to let you know he belongs on a depth chart as a third or fourth receiver.

But with all that, you'll have to forgive me if I'm adopting the folded arms, half-eye, skeptical wait-and-see approach. This:

Not because I doubt Byrd is a professional NFL receiver. That is clear. Nor do I think this team couldn't use a major influx of talent after last year's struggles. It's stating the question that they need all the upgrade they could get. I'm just wondering whether he'll be a system fit. Which is a perfectly legitimately question, given that this Dynasty was build upon the broad shoulders of tough, physical, precise route-runners, not on the winged feet of field-stretching trackletes. Men like Troy Brown, Deion Branch, David Givens, Wes Welker, Julian Edelman and Danny Amendola. Elite burners have rarely lasted here. Brandin Cooks had a 1,000 yard season and they traded him away and then beat him in the Super Bowl. Hell, they had a literal track star in Jeff Demps (a RB, but still) and traded him away for LeGarette Blount, who couldn't outrace Trump walking down a ramp before Demps ever suited up.

[Note that for the purposes of this discussion, I'm not putting Randy Moss in either category. He wasn't physical possession receiver or a speed burner. He was a weather pattern. A force of nature. An extinction-level event who couldn't be stopped by any means known to man. He'd excel in any system that involved the legal forward pass.]

So while I'm impressed as hell with Damiere Byrd's speed, agility, mobility and all the tools he put on display at the Lucas Oil Olympics and intrigued to see if Josh McDaniels can put them to productive use, I have to acknowledge that they've never truly been all that valuable in New England's scheme. Remember that N'Keal Harry had among the slowest 40-times at his position in Indy, and Belichick took him in the first round because he doesn't care about 40s. Even if they're 4.28 on grass. Of course I hope my doubt gets thrown back in my skeptical, handsome face. After all, all we're looking for Byrd is that he be an upgrade from Phillip Dorsett in 4- and 5-wide sets and create space for the others. And if I should end up eating these words they'll taste like aged prime rib. I'd love nothing more.