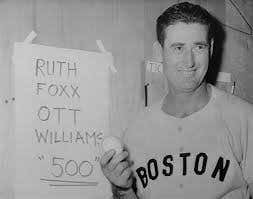 Ted Williams of the Boston Red Sox becomes the fourth member of the 500 home run club, as he hits a two-run shot off Wynn Haskins of the Cleveland Indians. The home run is the difference as the Red Sox beat the Indians 3-1 at Municipal Stadium. Williams would retire at the end of the season, hitting 521 career home runs, which ranked third at the time of his retirement.

Theodore Samuel Williams was born on August 30, 1918, in San Diego. Raised in San Diego, Williams received offers from the St. Louis Cardinals but decided to sign with the home town San Diego Padres of the Pacific Coast League, at his mother’s request. Williams quickly became a star in San Diego. When Ted Williams turned 20, his mother felt he was old enough to leave home, paving the way for to sign with the Boston Red Sox before the 1939 season.

Ted Williams was the most hyped rookie since Joe DiMaggio when he joined the Red Sox. He would not disappoint, batting .327 with 31 home runs and league-best 145 RBI, as he finished fourth in MVP voting. Two years later, Williams hit .406 to win the first of six batting crowns. No player has hit .400 since. Ted Williams followed up his .400 season, by winning Triple Crown in 1942, hitting .356 with 36 home runs and 137 RBI. Both seasons would see Williams finish second in MVP voting to Joe DiMaggio and Joe Gordon of the New York Yankees.

Uncle Same came to call up Ted Williams in 1943, as he served as a Naval Aviator in World War II. He would become a talented fighter pilot serving as a flight instructor in Pensacola as he became a second lieutenant in the Marines. Just before Ted Williams was to ship out to Japan, the war ended, allowing him to return to the Red Sox in 1946. Upon returning to Boston, Ted Williams led the Red Sox to their first World Series appearance in 28 years, while winning the first of two MVP awards.

It would be the only World Series appearance for Ted Williams, who, despite being one of the best hitters in baseball, was never able to win a World Series. Ted Williams would hear the call to service again in 1952, as his Marine Reserve unit was activated. By now, he had achieved the rank of captain. While serving in the Korean War, he flew 39 combat missions, serving as John Glenn’s wingman. Following the Korean War, Williams left the reserve and returned to the Red Sox in 1953.

Through all the service time, Ted Williams lost five prime years. Had he the wars not happened, Ted Williams would have achieved 3,000 hits instead of retiring with 2,654 hits in a 19-year career. He also could have had 600 home runs and possibly make a run at Babe Ruth’s record of 714 home runs. When Ted Williams hit his 500th home run, only Babe Ruth, Jimmie Foxx, and Mel Ott had joined the club before him. The Williams would hit a home run in his final at-bat, retiring with 521 home runs, at the time only Ruth and Foxx (534) had hit more.