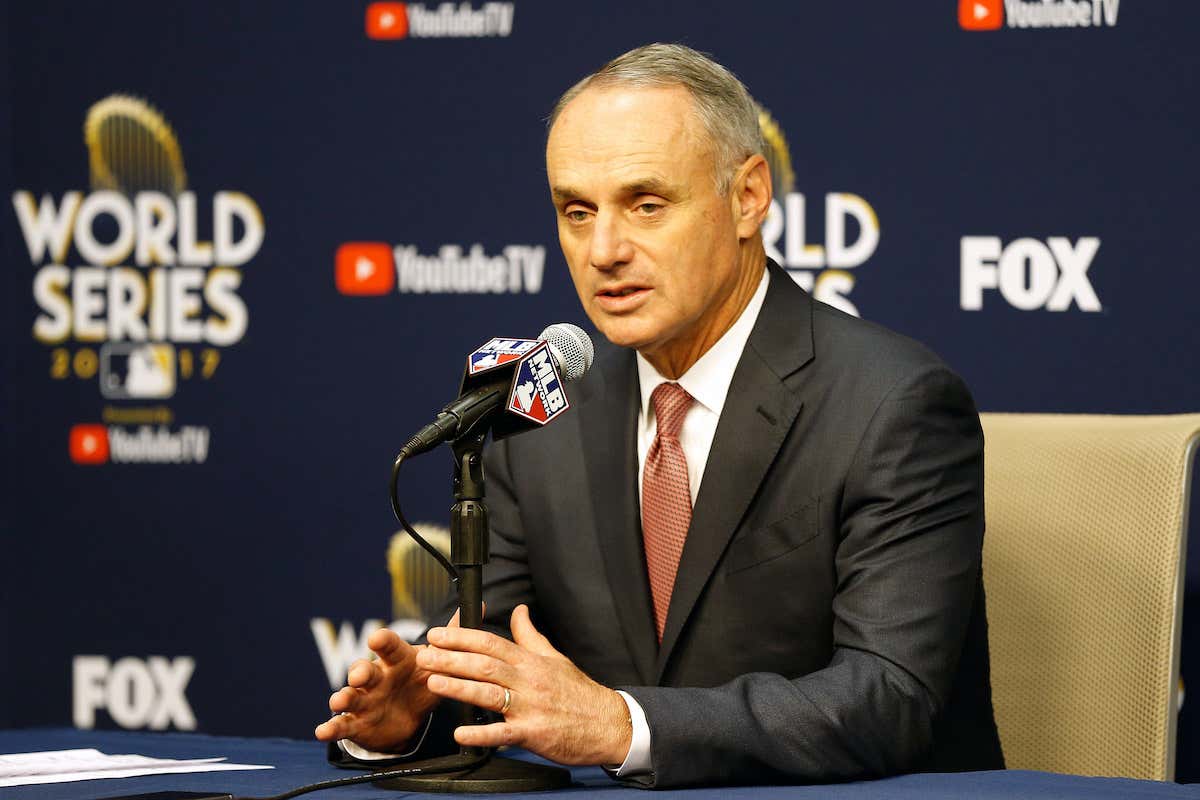 What. The actual. Fuck.

I know everyone is sick of the will they or won't they bullshit that's been going on for months now, but I mean holy shit. If you're the COMMISSIONER of Major League Baseball, you can't be throwing out statements like, "We will play Major League Baseball this year" if there's a chance that FIVE days later, you're going to say some shit like this.

Major League Baseball commissioner Rob Manfred told ESPN on Monday he's "not confident" there will be a 2020 baseball season and that "as long as there's no dialogue" with the MLB Players Association, "that real risk is going to continue."

In a conversation with Mike Greenberg for ESPN's "The Return of Sports" special, Manfred walked back comments made to ESPN last week, when he said "unequivocally we are going to play Major League Baseball this year" and pegged the likelihood at "100%."

"I'm not confident. I think there's real risk; and as long as there's no dialogue, that real risk is gonna continue," Manfred said when asked if he was confident there would be a season.

How can you make statements like the first one if you're not a THOUSAND percent sure that it's going to actually happen? How? Nobody -- or, at least this should be the case -- is more plugged in as far as whether or not there will be a season than Rob Manfred. How did it take five days to walk back your statement of there will be baseball this year to now you're not sure? What in the fuck is happening?

I mean, we know what's happening to some extent. The players want to get paid their full prorated salaries, and the owners don't want to pay them that if there aren't any fans in the stands. The agreement from back in March states that the players and owners would have to negotiation "in good faith" what that rate would be if there were no fans. The players feel like the owners haven't negotiated in good faith, and the owners feel like the players haven't negotiated in good faith, and around and around we go until baseball fans just stop giving a fuck.

Me personally, I still give a fuck. Of course, I'm paid to give a fuck. But even if I wasn't, I would still give a fuck because I love baseball. What I don't love is the fact that the sport that I love has already pissed away a huge opportunity to be the first sport to return after a global pandemic and have center stage during a time when people need something to look forward to and the game itself could use all the good publicity it can get. Instead, they've embarrassed themselves time and time again, trying to figure out a way to get back on the field, yet it's not the virus that's keeping the players off the field -- it's money. And nobody has any sympathy for either side if the holdup is over dollars earned.

I've said this before, but I'll say it again -- the solution is so simple. The players want to get paid in full. The owners don't want to pay full salaries because the revenue isn't there. I get it. The players signed guaranteed contracts, so they want what's theirs and the owners don't want to take even more of a hit without ticket sales, ballpark concessions, etc. The best proposal to date was the one where the owners offered 76 games and 75% of the prorated salaries to the players.

Now, I wouldn't have accepted that offer if I were the players, and they didn't. Two words -- deferred money.

Okay, you're crying poor? Fine. Pay me 75% of my prorated salary for the 76 games, and then over the next 4-5 years, pay me the 25% you still owe me once the revenue comes back in. Why would that 25% just disappear? If you're saying you can't pay me that money now, then get me back when you can. I should't have to eat that loss because you can't afford to honor a contract that we both signed. The players and the fans get their 76 games, which was in the neighborhood of the 82 games they asked for, the owners get to pay the players what the feel they can afford in 2020, and the players, over time, will get their full prorated salaries. Boom, done.

Why is that so fucking hard?