ABC 7- A woman who was intentionally coughed on by another customer inside a bagel shop in Queens is speaking out.Allison Goodbaum spoke to "Good Morning America" about the incident, which happened at the New York City Bagel & Coffee House on 30th Avenue and Broadway in Astoria on Saturday, June 6, two days before New York City entered Phase 1 of its reopening.

"I just saw this woman, and she was, she entered and she was just coughing on everything," Goodbaum said. "She's covering her mouth. She wasn't wearing a mask. She just wasn't following the CDC guidelines." Goodbaum then complained to an employee, but the woman overheard, stormed over and told her to mind her own business. She then claimed she had "good antibodies" and didn't need to wear a mask, before coughing on Goodbaum.

Gonna keep this one pretty short and sweet because I am not here to #embracedebate about wearing a mask in public. If you purposely cough on another human, you should be shot to Pluto. I don't care if it's during a worldwide pandemic in a city that was the epicenter for said pandemic or a random Tuesday when there isn't a super contagious virus spreading like mustard. You should be forced to pick up your shit at home, carry as much food as you can carry Oregon Trail style, and then get shot in a rocket bound for Pluto immediately. You can even have your choice of who builds the rocket. NASA. Elon Musk. I don't give a fuck. But there are no test launches for the rocket with enough fuel to make it to the furthest planet(?) in our solar system.

To be clear, I am by no means condoning snitching. But snitches get stitches, not spit on and/or potentially coronavirus. If you have a problem with someone, settle it with fists instead of spit like a normal human. Not only is coughing on someone a dickhead move but if you can't #RE2PECT a hallowed establishment like the local bagel shop where the only surprise you should get is a hint of onion in your sesame bagel, you deserve whatever punishment is bestowed upon you. Something tells me this lady knew she was wrong though the minute she realized she was being recorded, which you should assume is happening every single time you argue in public these days. 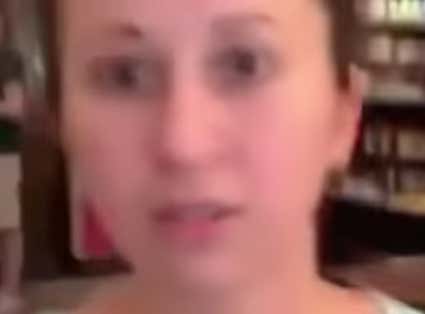 P.S. This trash human still isn't as bad as the Bagel Boss

P.P.S. As someone that used to live in Astoria and has been known to eat a bagel or 12, all I can think about is hos this coulda been me. Thankfully I now live in the burbs, so please direct all thoughts and prayers to the patrons of this bagel shop