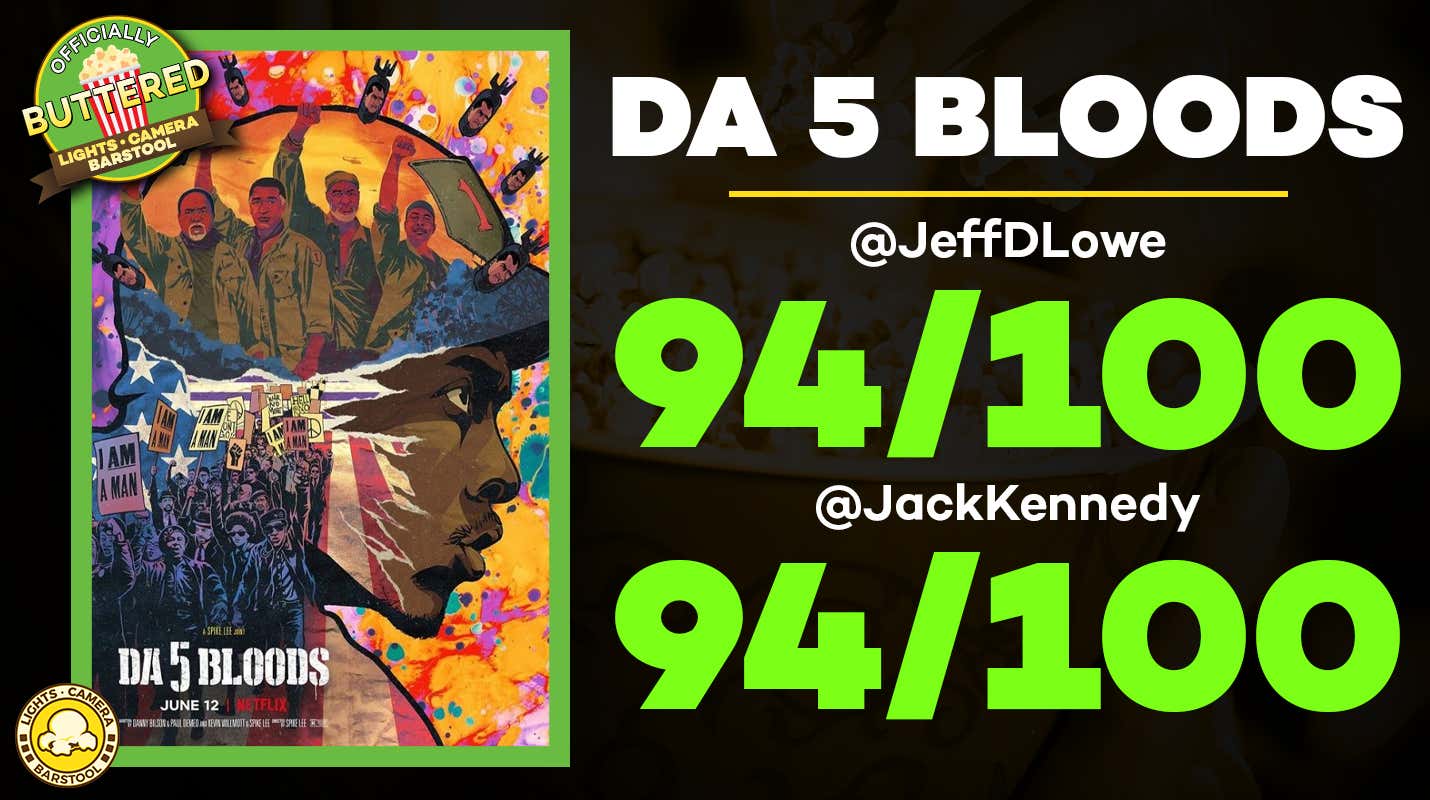 Not only are we getting new movies, but we are also getting good new movies, and the streak continues with Spike Lee's newest release on Netflix...

Four African American vets battle the forces of man and nature when they return to Vietnam seeking the remains of their fallen squad leader and the gold fortune he helped them hide.

KenJac (94/100): ‘Da 5 Bloods’ is a great example of what is possible when a director isn’t constrained by red tape or studio expectations because it was clearly exactly the movie Spike Lee wanted to make. The story he tells succeeds so well on so many different levels that it really blows my mind and makes it hard to even write about. I’d be doing it a disservice if I didn’t try, though.

At its baseline, it is a story about Vietnam veterans going on a hunt to find both the gold they buried during the war and the remains of their squad leader, “Stormin” Norman. They have to navigate a resentful population, old flames, shady money changers, and the ghosts of the war that still exist in Vietnam today. This level is engaging and would have even worked on its own if that were necessary.

The story also has a very raw look at our history through the eyes of African-Americans. Specifically how for a lot of black soldiers in Vietnam, they viewed the war as a way to earn equal treatment (a basic human right, by the way) in America. They also fought in this war, where they had a staggeringly disproportionate number of combat deaths, while the civil rights movement raged on at home. And when they got home, they didn’t get the heroes welcome, equitability, or basic respect that they thought they would. Instead, they were generally forgotten about by our government and were still treated as second class citizens. I think Lee does a great job at being subtle in this commentary, but also very loud when the moment calls for it. This level is amazing because it is nuanced so well while also legitimately teaching a lesson that isn’t taught in our history books.

There is a sort of sub-plot specifically for the father-son relationship of Paul (Delroy Lindo) and David (Johnathan Majors) which I found very emotional. Paul is very clearly suffering from the effects of PTSD but comes from a generation that perceived it as “weak” to acknowledge a mental health struggle. David wants nothing more than to connect with his father in what may be their last chance to do so. David’s struggle with that desire and the one to do what is right is a great mini-arch. This level gives the movie an added emotional punch which hits hard in the second half.

Another theme that I previously mentioned is the ghosts of the war that still affect everyday life in Vietnam. People are still killed/maimed all the time by unexploded ordnance, and it’s estimated that over a million people suffer health problems or were disabled by the U.S. use of Agent Orange. Thousands of Vietnamese citizens were killed during massacres on the ground and tens of thousands were killed from the air. There is a generational hatred to that which I can’t even begin to imagine and, again, is not something that is talked about in our history books when we were kids. We mostly get taught that we were always the good guys no matter which is obviously a little naive. Lots of movies (Platoon, Born on the Fourth of July, etc.) address this, but I loved how Lee talked about the war’s effect on modern-day Vietnam.

Lee manages all these levels, which combines engaging storytelling with difficult conversations, with a lot of grace. Maintaining a coherent movie while informing is something that would be impossible for a dumb brain like me. He includes plenty of his “Spikeisms”, which anyone who watches his movies will recognize and some people don’t like. Some might say he takes liberties with the runtime as well. To me, though, I can’t think of a single scene I would cut.

Anyway, this is sort of an unconventional review compared to the usual ones I write, but I want to talk about one last thing and that is the performance of Delroy Lindo. If he isn’t at least nominated for an Oscar for this role, I’ll eat my hat. He is so fucking incredible in this movie, completely delivering in scene after scene. There is one point where he has a crazy monologue spoken directly to the camera which is like something out of Hamlet. Chills down my spine, man.

This movie certainly won’t be for everyone. Some people will complain about the length, political messaging, or maybe a perceived lack of subtlety. But I think many of you will find it to be an incredible fictional adventure that gives you a lot of non-fictional history and emotion to consider. Even if that’s not your thing, watch for Delroy Lindo’s performance because I cannot emphasize enough how god damn good it is.

JeffDLowe (94/100): On the heels of 'BlacKkKlansman', it's safe to say that Spike Lee is on a roll right now. 'Da 5 Bloods' is incredibly timely with what is happening in this country and around the world in terms of race and social issues and a fucking excellent movie on its own. Lee's newest release (available now on Netflix) has many profound things to say and does so over the course of a fast-paced, tightly-packed movie with undeniably engaging energy.

We've seen the Vietnam War play out on the big screen countless times, but this story told through the eyes of four African-American friends feels unlike anything we've seen before. It's one thing to address issues in modern society in a movie, but to do so, all while connecting it seamlessly to an event from 60 years ago and have no moment in the movie feel at all forced is quite the achievement. The message, told directly but not in a jarring way, is striking, when presented with the similarities between the struggles of the characters from decades prior and the ones still existing today. Lee's deft ability to beautifully tell such an impactful and important story, all while never seeming to slow down at any point in the movie is what makes 'Da 5 Bloods' so great. The emotion, both happy and sad, and funny and angry, seeps off the screen up until the credits roll.

When it comes to the cast, I wasn't in love with all of the performances, but it hardly matters, especially factoring in the level at Delroy Lindo played the character Paul in the movie. The character is complex and crafted with great care by Lee as he dons a MAGA hat, and shares contrasting viewpoints to his friends and comrades. There is a balance with the character that I found quite fascinating, especially for a creator who is never shy to let his films speak on behalf of his viewpoint. With the character of Paul, you get a humanizing angle where Lee is able to state his point but also do so with a sense of respect for the differing opinion, instead of clear negativity, or an outlandish parody of the opposite side. Lindo's performance should stand the test of staying power between now and the next Oscars, and would still stick out in any year with normal releases.

In terms of the technical and visual aspects of the movie, I have to nerd out and say that I love (always) the decision to show old, flashback footage in different aspect ratios. It gives the movie such a distinct flare and constantly pulls in your interest level to new heights. Lee didn't just tell a great story with the movie, he painted a fantastic picture, as well.

Spike Lee has made plenty of fantastic movies over the year, but with the back-to-back releases of 'BlacKkKlansman' and ' Da 5 Bloods', it's clear he has found something and is firing on all cylinders. He was able to tell the story he wanted to tell and did so in spectacular fashion. Not only is his newest movie outstanding, but it's also available on Netflix and everyone under the sun should give this a watch.

--
Another recommendation from us with the movie being Officially Buttered as it clears the 69/100 average threshold. We also interviewed Judd Apatow, and that will be released in the next Lights Camera Barstool this upcoming Sunday.

Until next time… stay safe and enjoy the new movies hitting streaming platforms this weekend.