Source - The U.S. Supreme Court ruled Monday that existing federal law forbids job discrimination on the basis of sexual orientation or transgender status, a major victory for advocates of gay rights and for the nascent transgender rights movement — and a surprising one from an increasingly conservative court.

Across the nation, 21 states have their own laws prohibiting job discrimination based on sexual orientation or gender identity. Seven more provide that protection only to public employees. Those laws remain in force, but Monday's ruling means federal law now provides similar protection for LGBTQ employees in the rest of the country.

About time? I'm honestly confused as to how this wasn't a thing yet. I know that I'm spoiled to live where I live and work where I work, but the fact that some LGBT people have had to deal with this type of discrimination without any sort of federal protection blows my mind.

Here's how it all started:

The court's decision specifically addresses the cases of two gay men and one transgender woman, who were fired from their jobs and who sued their employers alleging discrimination.

Gerald Bostock, a Georgia child welfare services coordinator, said he was dismissed in 2013 for unspecified "unbecoming conduct" after his employer learned he had joined a gay softball league. New York skydiving instructor Donald Zarda was fired in 2010 after a customer complained that he had come out to her as gay during a jump. And, in Michigan, transgender funeral director Aimee Stephens was fired from her job of seven years after telling her boss that she planned to transition.

Like the article said, 21 states already had their own laws prohibiting job discrimination based on sexual orientation and gender identity, but the vast majority didn't. Meaning you could walk into a job interview, be completely qualified and have a potential employer go, "nah, you're gay" and nothing would happen. You could be at a company for twenty years, come out of the closet, get immediately fired, and nothing would happen. That's the reality that people in those other 29 states were dealing with. It's absolutely wild. But hey, better late than never- right?

Here are the cunts who voted against it: 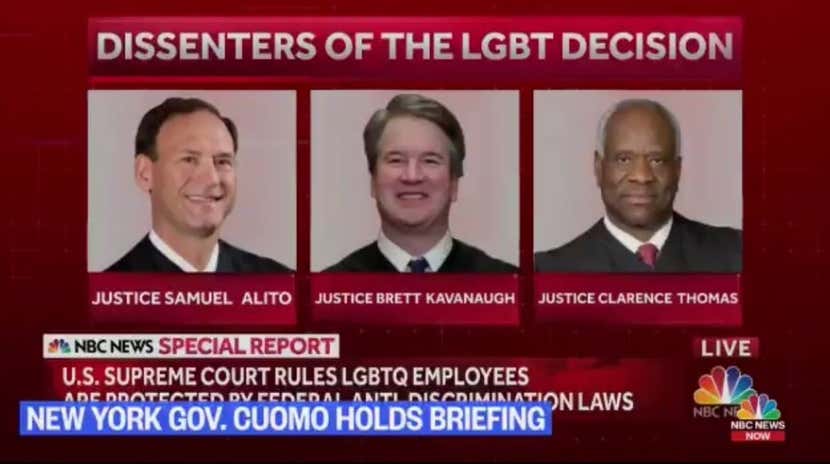 I hope both Kavanaugh's daughters turn out to be gay so he can explain his reasoning behind this one. In related news, SpongeBob Squarepants is apparent gay. No word on whether or not that's why his show went off the air. More on that later… Happy Pride!