As if I needed any more reason to love this man, Danny Ainge has been coming up huge these last few days for Celtics fans all over the globe. The second the Celts were allowed to go into the Red Auerbach Center I've found myself doing nothing but refreshing my timeline in hopes that we can some sort of footage. Then the Celts blessed us with a 2 minute video they sent out to media. Frankly I was a little insulted I wasn't given a sneak peek but you know what now is not the time to worry about that. The point is he had our first look

and it was incredible. But then as then days went by there was more silence, which again made no sense to me. Don't tickle my balls like that and then go dark. People say blue balls aren't real well you try watching Jayson Tatum knock down threes and then have to go cold turkey. Your balls are going to hurt. But then came our beloved Danny Ainge from the clouds after three days

I don't think Ainge realizes what he's doing right now, but if you ask me he's doing God's work. Not only am I impressed he figured out how to record video on his phone and put it on Twitter, but it seems like he's committed to giving the rest of us who are foaming at the mouth for any sort of Celtics practice footage the goods. I mean let me ask you something. Is there a guard in the league that can finish that layup over Tacko? Nope. Not with that timing. You show that clip to Tommy and he'll ask you how you got your hands on never before seen Bill Russell footage.

Now let's talk about Gordon. First, give all the hardos a minute to say "ohhhhhhhh big deal an NBA player is shooting threes against no defense, anyone can do that!"

Uhhh yeah man. Who cares. You sound scared. How much live basketball have you seen during quarantine? I believe the phrase is beggars can't be choosers. I've said it before but Gordon Hayward is perhaps the biggest wild card of this whole potential return. If we get healthy/aggressive Hayward? The Finals are a legit possibility. If we get the version that plays scared and doesn't do much other than stand in the corner? This team can lose in the first round. 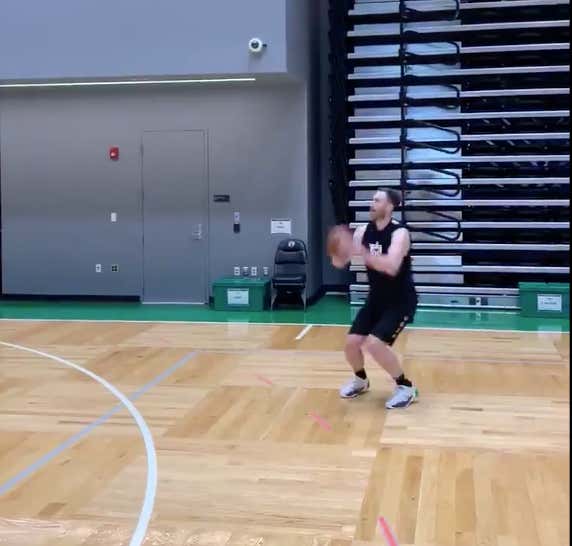 That looked effortless. And it's not like he only made one. Now it would be silly to assume that based off a couple practice jumpers that Gordon is going to carry this over to Orlando, but at the same time it would be silly to assume that he won't. I was excited for a healthy Hayward to be back mostly because of his play in P&R and how he can be a primary facilitator to help move Kemba off ball so defenses couldn't just trap him. But now? I'm ready to give Hayward 10 3PA a night. That's all it took for my simple brain and I have no regrets.

I'll never understand how there are Celtics fans that are down on Hayward despite him throwing up a season that was essentially his best UTA version. I'm not kidding.

The one main difference is he isn't getting to the FT line anywhere close to the same rate, but I have a feeling a fully healthy and rested Hayward can do that. If not, he can just bomb it from 30 feet as we see in that video so really what's not to love.

So thank you Danny. Please, whatever you do, do not stop giving us these clips. We still have 45 more days to get through and every one helps.