I'm sorry to bring in the new week with a bombshell like that. Since I like all my bad news at once, I'll give you another one: You've never been older than you are at this moment.

These harsh realities were brought to light by a recent deep dive into what Generation Z'ers (born from 1997-onward) are saying about Millenials (born 1981-1996) on the TikTok. Now, why would anyone care what anyone on TikTok has to say about anything? Because where the kids are, they're the future and these kids aren't afraid of shit. 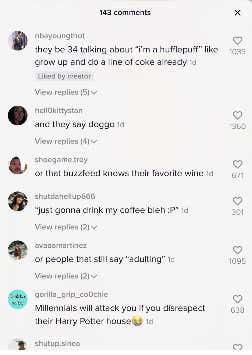 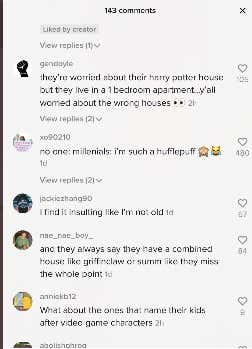 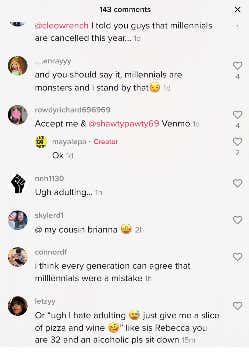 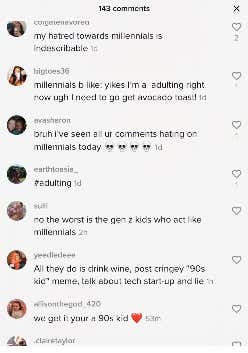 Laugh it off all you want but "They 34 talking about I'm a hufflepuff like grow up and do a line of coke already" is a SCATHING attack against 34-year-olds, hufflepuffers and coke-doers alike. If you fit all three criteria, God bless your soul.

"All they do is drink wine, post cringey 90s kid meme, talk about tech-start up and lie" is a fucking killshot. Because we do do that. Not all of us of course, but the actions of a select few have never stopped us from harsh overgeneralizations before and they damn sure won't stop us now. Just think about the number of advantages these kids have over the Olds, myself included.

You can try fighting these Gen Z'ers but it is a losing battle. The gap between ages may only be 10 or 15 years but think about how Twitter and constant online usage broke my your brain and sense of time. I feel like Kobe Bryant died decades ago. We watched "The Last Dance" together as a family in what appears to have been around 2016. The NCAA canceling March Madness was less than 100 days ago. Think of all that's happened between now and then, and then consider how big the gap in innovation is between generations.

It's difficult to tell from this vantage point whether they will consume us Olds or merely roast our existence. One thing is for certain: there is no stopping them; the Yoots will soon be here. And I, for one, welcome our Generation Z Underlords. I'd like to remind them as a trusted Twitter personality, I can be helpful in rounding up others to toil in their underground TikTok caves.