I don't know how to properly quantify how big of a deal US State Quarters were when they first came on the scene. It was like The Beatles but you could collect them and spend them and save them in a very slim, dust-covered book in your living room for strangers to gawk at. It was the turn of the century and we were getting new money circulating. Informercials ran 'round the clock for those goddamn thin blue collectors books. They made it seem like if you were the first to collect all 50 you'd become the richest man on Earth and not just a guy with nearly $13. But we're not here to discuss that value of a quail, no sir. We're here to break down the best of the best and the worst of the worst. And it is with a heavy heart that I must announce that there are a lot more worst options than best. 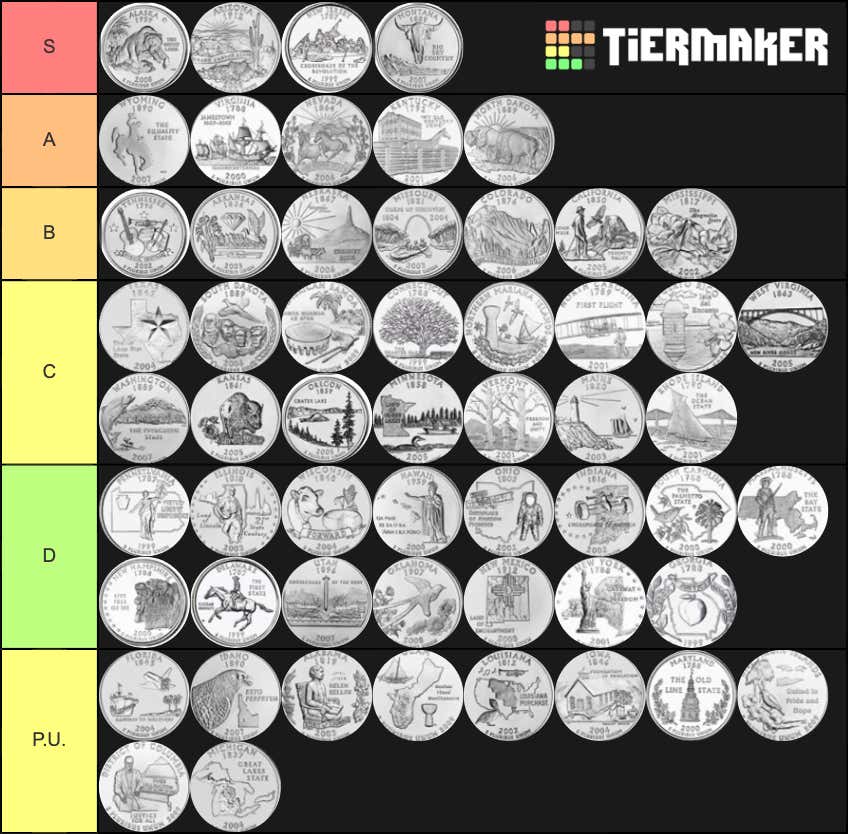 I truly wanted to get five quarters into S Tier. I searched far and wide, sea to shining sea, and honestly it was tough to get to four. Alaska is the best quarter on the entire board. It should be in its own tier, truth be told. They knocked Alaska out of the park. Arizona is what the rest of these pathetic states should have been striving for all the while. Picturesque, really sets the tone for what to expect out of Arizona. Reminds me of that Rugrats episode where Tommy and Angelica were climbing tires in that desert mechanics shop. New Jersey went with some classic Americana, which is a risk as you can see by the rest of these rankings, but it worked here for them. And for a peak behind the curtain, Montana was initially in the A Tier, but it was by far the most tweeted response for GOAT US Quarter that I couldn't drown out the people. I agree it's upper echelon for certain but it was you, the people, who bumped it into S Tier for all of eternity.

Some strong individuals to make up this $1.25. Wyoming got a lot of praise from the masses but what separates it from the S Tier is its complete lacking in both razzle and dazzle. Even a smidge of dazzle and we're looking at a rival to Alaska, but alas it will have to settle for A Tier. Virginia's got no complaints to be found by this man. Sturdy ships, little motto in the top left, that's an A Tier quail every day of the week, friends. Nevada and Kentucky are tremendous. If Nevada had leaned fully into the casino/gambling/prostitution aspect of its state that we all know and love it could have been the GOAT. But they went for some horses and shit and it's still extremely above average. Kentucky's probably should have been a basketball, half red half blue. They, too, chose horse. And I'll never kick a North Dakota quarter out of bed. Not if they're bringing multiple bison to the table.

In most other tiers, the B Tier isn't that much of a drop off from A. Except for this tier, where there's an enormous cliff between A and B. Did we have no graphic designers at the turn of the century? Did kindergarten classes draw and vote on the artwork used for the vast majority of states? Have we no pride in ourselves to better represent our homes? Tennessee is OK. As you'll notice as we go on a lot of these states are just like, "We're known for three things and also here's a picture of the outline of our state." Which fucking stinks. Tennessee's is the same format but doesn't stink as much as the other 28 states who opted for this unoriginality. Arkansas threw a diamond on theirs which is more creative than the rest of the jamokes below. California feels like they left too much meat on their bone. A decent quarter in comparison to the rest of the field but boy oh boy, if they had just copied and pasted their state flag they'd be in S Tier easily. Mississippi did better than a lot of far more important states and we should use this as a time to reflect upon what we can improve upon as a society so that mistakes like this cannot happen again moving forward.

Most of the quarters in this tier played it plain and safe. There's no better example of such than Texas. Here's our state, here's the star we like from our flag, now keep it movin'. It makes for a clean quarter which is what ultimately allowed these states to rank above the mounds of trash below. Connecticut got a lot of hate in my mentions, some calling it the worst quarter on the board, and that's simply not true. Is it the best quarter I've ever seen? Heavens no. But that's a sturdy tree, you can't argue against those roots. For a state that has literally nothing to offer other than being a road that connects Boston and New York I feel like they did a good job representing its overall baron and bleak disposition. No one told them to choose a leafless tree in the midst of winter, that was their own call and I respect them for their self-awareness of stinking. Bon Iver album covers have more life and hope than the Connecticut quarter. Oregon and Minnesota are the same quarter, one has a duck the other has the trees in the foreground. You have to rank them back to back like Larry Bird and Magic Johnson otherwise you're a fraud tierer and will never have any credibility in this field.

There are a lot of important states in this tier, which is more disappointing that anything. Massachusetts, my home, my true love...what the fuck, guys? If you want to go Revolutionary I can get behind that but don't just put a single Minuteman superimposed on top of the state outline. It's lazy, it's garbage, it's unbecoming. The Patriots score a touchdown in a meaningless October game and they have Minutemen do more exciting shit than this quarter. Pennsylvania? WOOF. Cracked liberty bell, Ben Franklin taking an air bath, a tub of mayonnaise bouncing off an Eagles' player's head, anything would have been better than this. New Hampshire's should have just said LIVE FREE OR DIE with no picture, instantly a top five 25 cent piece. But the state I'm most upset with in this tier? Hawaii. Hawaii has too much sauce to be this mundane. Hawaii has too many volcanos, sea creatures, and flowers to be this plain Jane. They punted on first down and they should feel bad about doing so. New York should take offense to be in the same tier as Utah and Delaware. Delaware would honestly probably be higher if New Jersey didn't jack their design first, but that's life. New York? No one cares about the rest of that state outside of the city, for them to pretend like the state is anything more than the city is laughable. Toss the skyline on there and call it a day, instantly an S Tier quarter. You wanna show me Albany and shit you're barely going to make the list at all. If it weren't for the inclusion of the Statue of Liberty it would have found itself in the P.U. Tier with the Idahos of the world. Speaking of which.

I want to boo this tier like that mayor from Minnesota. Putrid. Disgusting. Abhorrent. Florida made rocket ships uncool, a nearly impossible task. Idaho turned Ray Charles into a bird for some reason and thought they could get away with it. NOT ON MY WATCH, IDAHO. Alabama put a con artist on their quarter and forever sullied the quarter and everything it stands for. Your state literally produced Bo Jackson and this is what you send to the US Treasury for production? Embarrassing. Guam, bud, you'll never be a state if this is what you say when we give you the chance to speak. If you're not going to respect yourself why should we respect you in return? I have no fucking clue what Louisiana was even aiming for but it didn't work. And for a state with so much flavor and pizzazz that's unacceptable. Iowa? Trash. Maryland? Puke. Tim Duncan's hometown? *45 seconds high pitched fart sound* DC? ????. But Michigan... Michigan is the worst quarter of all time. It's just an outline of the state and the lakes that happen to help make out that profile. Michigan is admitting to you it has nothing to offer except the land that was given to it. Like they have a franchise in the League but have no idea how to run it is what they're admitting to you with this coin. They essentially put the Lions on here without putting the Lions on here. Have some pride for me one time, Michigan, you deserve better than this and you know that.