One month ago, I decided to jump on the Bundesliga bandwagon since I have always wanted to be a soccer hooligan and it looked like there would be a decent amount of time before American sports returned.

Now I love my beloved Dortmund with all my black and yellow heart. #BVB for motherfucking life (even though I'm still not sure what BVB means). Congrats to Bayern for winning the Bundesliga this season*.

However, I still want to pick an EPL team since it feels like it is the big boy soccer league and based on the way things are going with MLB negotiations and Kyrie trying to pull a coup d'etat on the NBA's ass, we may not be getting either of those sports on this side of the pond anytime soon. Being able to wake up to one of my teams playing, getting into online scrums with opposing fans on Twitter, drop an occasional C-bomb since I'd be saying the English version of it, and maybe lift a pint or two once my kids are older is about as good as it gets for an old washed up loser like me. I've long been a fan of the London NFL games simply because it's sports in the morning, so watching teams that are actually supposed to play on the pitch will be much more fun than the slip and slide slop we get every so often in the NATIONAL. FOOTBALL. LEAGUE.

To choose my team, I once again relied on Barstool's wonderful soccer futbol football fuck it I'm still calling it soccer blogger Sam.

Instead of picking a team immediately, I started to cross teams off instead to make my decision easier.

- Man U was instantly eliminated because I've heard they are the Yankees of the EPL and fuck the Yankees, even though this gif was persuasive

- Man City was instantly eliminated because I've heard they are partners with the Yankees and fuck the Yankees.

- I wanted to become an Arsenal fan because Zah is an Arsenal fan, I'm a fan of Zah, and found out the initials COYG that invade my Twitter timeline actually is Arsenal fans saying Come On You Gunners while cheering on the lads on the pitch. However, Zah pleaded with me not to root for Arsenal because they are the Mets of the EPL right down to the heartbreaking losses and absolutely horrendous ownership. I already root for the Mets and the Winter Mets (the Knicks), so I was out on rooting for the Soccer Mets. Sorry, and thank you, Zah.

- I want a team that has some sort of name recognition and isn't going to be relegated out of the EPL because what would be the whole point of this fucking exercise if I just started rooting for a trash team that ended up in EPL Triple A or whatever they call it? I refuse to be a front runner but I also refuse to be a back runner. Plus there's apparently no playoffs and Liverpool pretty much has the regular season locked up with that PREPOSTEROUS record, so I need a team that has at least a chance to be in the mix this season since the top 4 teams apparently end up in the Champions League which I've always thought sounded fun as hell. 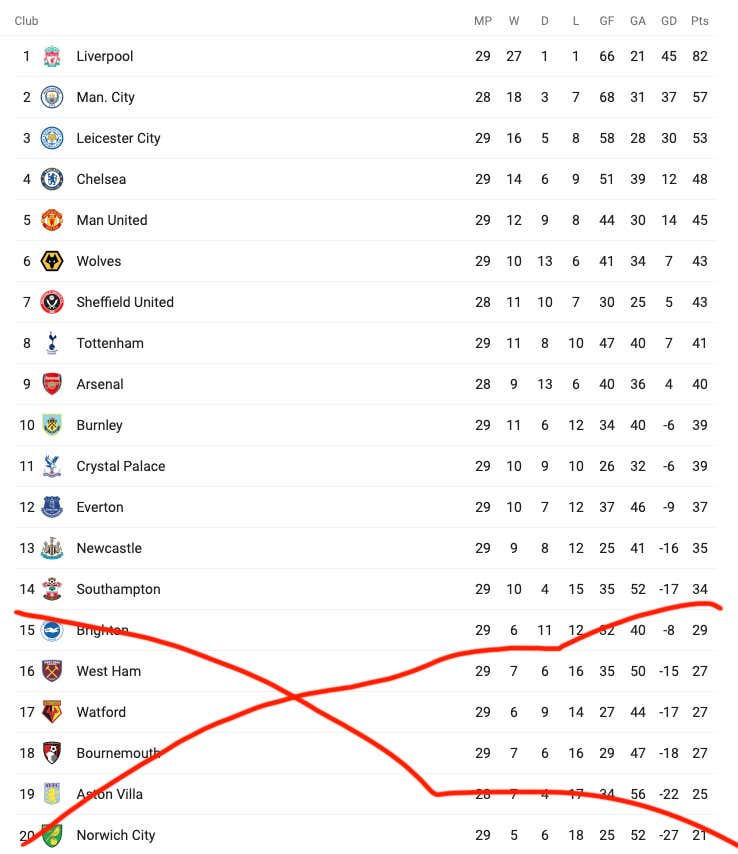 - I was leaning toward Tottenham just because I like saying Tottenham and the name Hotspur is lowkey awesome. Sam roots for them as does Phil Collins, which pretty much made them the leader in the clubhouse. But rooting for the Spurs after a team with the same name eliminated the Knicks from what be the last Finals I will ever see them make. Sam putting this little tidbit in his blog sealed the Spurs' fate:

Not a club for the faint of heart.

You guys have seen me. I am clearly faint of heart and don't need my new footie team being the thing that gives me my inevitable massive heart attack.

- Crystal Palace caught my eye for a second. Then I remembered it was because that's the name of the very cheap vodka I used to buy in college by the handle and immediately reacted like this:

- I wanted to jump on the Leicester City bandwagon. But after they completed one of the greatest miracle seasons in sports history, it just felt like I'd be walking into a party that just had the most incredible thing ever happen that could never be topped that everyone else at the party will be talking about forever. Pretty much like becoming a Mets fan in 1970 or a Red Sox fan in 2005.

- I kinda skipped over Sheffield United but there is no way they'd match up to the legendary Gary Sheffield in my mind, so they are out. You guys wanna watch Sheff hit some dingers? Me too!

Nothing was scarier than being in foul territory when Sheff was at the dish. His one year with the Mets was the one year I got good tickets from my old job right on the third base line and I never walked out of Citi Field with a dry pair of pants after 9 innings of psychological torture.

- Liverpool has been too good this year to choose them plus I feel like they already have a pretty big Barstool presence with Feits and Big Cat promising to never walk alone. Everton and Wolves didn't really grab me either way. Which means…

- I am taking my talents to Chelsea. I am theirs and they are mine from this day, until the end of my days.

To be honest, I blindly fell in love with Chelsea's logo pretty much immediately and had them in the back of my mind from that moment on. I told Sam I was 99% set on Chelsea a month ago when I picked Dortmund as my Bundesliga squad and he solidified my fanhood by dropping these facts on me noggin:

- They have a rich Russian owner with big pockets willing to spend that I I pretty much see as the Ruskie Steve Cohen, which is good since I may never see Uncle Stevie ascend to the throne in Flushing because baseball is probably going to bleed out over the next few weeks/years/decades.

- They have the BABYJESUS, Christian Pulisic, who just so happens to be from the U.S. of A! I already root for The Babyjesus Jr. on my beloved Dortmund. Rooting for both Babyjesuses out of complete coincidence seems like a rare gift from the sports gods to me.

I can't wait to tweet this at all the haters

- Chelsea isn't the bluest blood team but they aren't bums either. I believe that breaking and entering bitch Goldielocks would say they are just right.

- Finally and most importantly, Chelsea fans not only include Will Ferrell and Michael Caine but also Erika Nardini. Pick a CEO you'd want to associate yourself with more than the Nard Dawg. You can't.

This feels like it happened no less than 100 years ago

So that's my team for anybody that wants to hop on board. I seem to be doing much better picking foreign sports teams in quarantine this year than I was picking sports teams as a kid. If you are still trying to decide who to pick, check out Sam's blog or just want to pick a team at random because if you don't pick an EPL team during this boring ass time, you are never going to do it.

See you tossers on the pitch!

P.S. Someone asked if I would become a Napoli fan in the Italian Serie A league. Since they are the only team I know and I looooooved their fans when they won in the Maradona documentary, I am in. So the Corona 4 are the NC Dinos, Dortmund, Chelsea, and Napoli. We will get through this quarantine together!