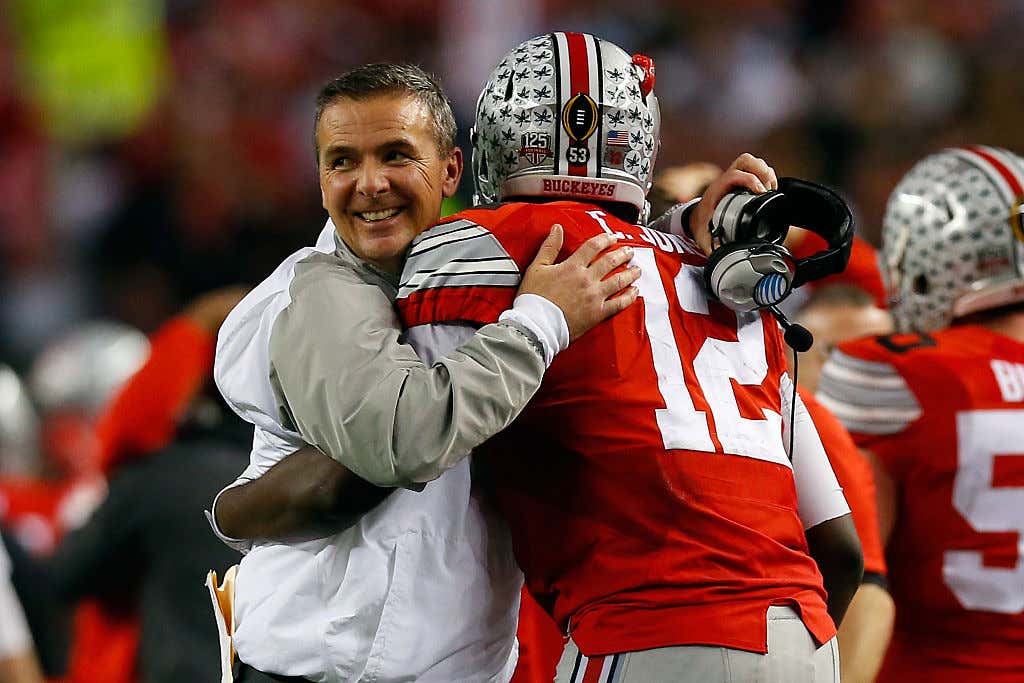 Alright so late last night I was perusing through the Buckeye Scoop website to get my Ohio State football fix, and Bill "The Bank" Greene was doing a little Thursday Q&A session with the fans to discuss his 20+ years covering the program. Lots of questions that you would expect from a fanbase that is chomping at the bit for football to return because we have the best team in the country, hands down.

"How many touchdowns will Justin Fields throw this year?"

"What will the sack total be for Zach Harrison and Tyreke Smith?"

"Is Dabo in trouble?"

Lots of Buckeye fanboys. It felt like home. But then, then, something truly magical happened. I heard an Urban Meyer recruiting story that surpassed what I thought was an undisputed #1 Urban Meyer recruiting story of all time. You know, the one where Urban stole 5-star safety Vonn Bell right under Nick Saban's nose down in the south by saying 'Vonn, if you go to Alabama you're going to be seeing me anyway. You might as well ride with us to the game."

Boom. He's a Buckeye. Flash forward to where Urban, Vonn, and the Buckeyes knock off #1 ranked Alabama on the way to the first ever College Football Playoff national championship. It was basically the beginning scene to an Oscar winning movie. Probably will be some day. Anyways, I thought it could never be topped, but I just heard another one and I think I like it even more.

Someone asked Bill "The Bank" Greene his favorite Urban recruiting story, and he responded that a West Virginia commit visited OSU with his dad a couple years back. Urban offered him a scholarship, and then he said, "You have 3 minutes to take it or I'm moving on to someone smart enough to know that I don't recruit against West Virginia."

Balls just dragging on the ground. This here is THE Ohio State University. We compete with two schools and two schools only: Alabama and Clemson. That's it. If other SEC teams want to jump in the mix every once in a while, so be it. But West Virginia? It's a disgrace we even have to share the same planet as the state of West Virginia, let alone the same division in college football. So look kid, I'll offer you this scholarship because I make people's dreams come true and I want to see you happy, but you have 3 minutes to decide to change your entire life trajectory, give up on WVU, and become a Buckeye. Start the clock.

……..and the kid committed