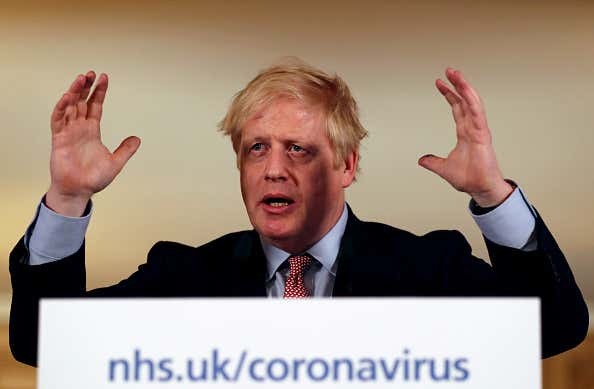 Last week came the sad and tragic news that as the UK's 'Rona lockdown continues, the government was banning all royal subjects from having intimate contact with anyone they don't live with. Not even in their own home. And that includes making the sexy time.

Well I'm happy to report that, like a heroic figure out of Arthurian legend, Prime Minister Boris Johnson has ridden in to rescue his citizens from this celibate tower they've been locked in. He's St. George, slaying the dragon of forced abstinence:

Mirror - Boris Johnson will allow one-person households in England to form ‘support bubbles’ with one other household from this weekend.

That means partners who live alone in separate homes can now meet up without social distancing – partially lifting the ‘sex ban’. Single parents with children under 18 are included but the change does not appear to apply to adults who live apart and in households of more than one person.

The move also only applies in England, where around 11 million people live alone or as single parents. The PM said: ‘There are still too many people, particularly those who live by themselves who are lonely and struggling with being unable to see friends and family. From this weekend we will allow single adult households – that’s adults living alone or single parents with children under 18 – to form a support bubble with one other household. ‘

All those inner support bubbles will be able to act as though they are the same household, meaning they can stay inside each others homes and do not need to stay two metres apart. …

[N]ow some adults will be able to stay overnight at another person’s home. That means it will no longer be illegal for them to have sex in their own home with someone they do not live.

It brings the Government’s stance closer to that of Holland, where single people have been advised to find ‘lockdown sex buddies’. But it could cause difficulties in shared homes if housemates are forced to choose only one person to bring into their household ‘bubble’.

Well OK then. You might think this is absurd and draconian and nothing like this was ever done in the history of plagues that have ravaged England. And it's not only unenforceable, it's way behind the curve when the NYC Health Department is encouraging people to have "kinky sex parties" as long as they're in an open space and use masks and glory holes when ever possible. But I don't think we should look at it that way. Consider this a gift. A further step toward getting your freedom back.

Johnson just doubled the amount of sex partners every Brit could have. More, if you choose your "support bubble" home wisely. I'm sure right now, neighbors are getting together in Zoom meetings and group texts, trying to figure out which support bubble home they should partner up with. Like maybe the Montgomerys would prefer the Chapmans. But the Chapmans are holding out for the Campbells just up the road. And every couple is hoping they're not the one without a support bubble couple when the music stops on this game of Swinger Musical Chairs.

You can almost picture it. After months of dreary, government-imposed monogamy, everyone finally being able to let loose. Like a Benny Hill bit, them running around from door-to-door in fast motion to "Yakkity Sax." You might not think it's enough, but as someone who has no other options because no woman would be interested, I envy these Brits.

Besides, by now they should've done something with all the time they've already had. That's what the British people do when they're quarantined. In 1606 during the Bubonic Plague, Shakespeare  wrote "King Lear," "MacBeth," and "Antony and Cleopatra." In 1665, Sir Issac Newton invented calculus, did experiment with optics using prisms and began laying the groundwork for his theory on gravity. I've been writing blogs about the Patriots offseason and watching "Ozark." While also remaining celibate. A little legally-mandated abstinence isn't the worst thing that can happen to a people. So just be grateful you get to swap a little thanks to this bubble idea.