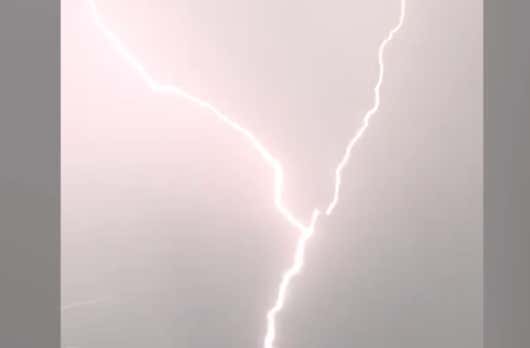 NDTV - Shocking footage captured this weekend shows a plane getting hit by three bolts of lightning shortly before landing at London's Heathrow Airport. According to Yahoo News, the video was shot in central London moments before the plane attempted to land in stormy weather. In the video, three forks of lightning are seen striking the aircraft, which was filmed flying in a sky overcast with grey clouds.

The lightning bolts appear to originate from different directions before converging to hit the plane, which continues flying after the impact.

I was thinking a lot about this video. A plane, which already within itself makes no sense that it should be able to fly the way it does, gets struck by 3 lightning bolts at the same damn time. Your initial reaction when watching it is a big ol "nope, no thanks". But then when I started typing the blog I realized that was the wrong reaction. And I was thinking and typing about how ridiculous the entire concept of flight is and how it still blows my mind we can get across the world in a little tube and yada yada yada when it dawned on me- this video shouldn't scare you. No. In fact, it should have the opposite effect. I've never wanted to fly more in my life. What is there to be scared of? Zeus threw 3 lightning bolts at this plane and it just kept going it's merry little way, not a care in the world, no worse for wear. Mike Tyson just threw a 3 punch combo at this plane and it didn't even flinch. We're talking about lightning bolts hitting a 747 straight on from 3 different angles and while you would think it would start tailspinning out the sky, it doesn't move a muscle. Incredible.

I think a lot of people get nervous on airplanes because the entire concept of racing through the sky at 10,000 MPH is ridiculous. Kinda wild how we've all been flying on planes our entire lives, it's not like we've ever known any different, and we still are sort of skeptical about the whole thing. That's how strange the concept of flying is. We ain't birds. If you took me back in time to the beginning of commercial airlines flying in the late 1920's-early 1930's I'd probably call you a ding dong brains for getting on that thing. Righttttt....a metal tube is going to get you from here to California in one piece. I'm so sure, buddy. Sounds realistic.

But I think I've reached a turning point. Planes are solid. I'm sold. Just get working WiFi on them. The jig is up now. You can't get hit by lightning 3 different ways and then tell me planes can't figure out the WiFi situation. Cheap bastards, just give us working WiFi you assholes.