The Missing Link was one of those guys where you wake up every morning thanking god that his NHL career was over before "Happy Gilmore" came out. Because if he was still in the league in 1996, you can bet your sweet ass that this maniac would have taken his skate off and tried to stab somebody with it. He was, in every essence of the word, an absolute menace. And for that, an absolute legend as well.

Link Gaetz was drafted 40th overall in the 1988 Draft. Why? Well because Mike Modano needed a bodyguard, and The Missing Link had just put one more fight on tape before draft night.

He made the jump to the NHL right away but only played in 12 games for the North Stars in his rookie season. Not because Mike Modano didn't need any protection anymore, but because he got arrested for drunk driving.

Then after another 5 games with Minnesota the next season, he was off to San Jose. With the Sharks he played 48 games in the 1991-92 season. He actually had a halfway decent season with 6 goals and 6 apples. But we all know he wasn't in San Jose to actually play hockey. The man was there to blast his fist through the skulls of his opponents. And this sick bastard had 326 penalty minutes in 48 games. The NHL record for most PIMs in a season is Dave Schultz with 472 in '74-75. If The Missing Link played 76 games like The Hammer did in that season, he was on pace to shatter the record with 516. Just look at this maniac go.

But he ended up getting in a pretty nasty car crash at the end of that season and never played in the NHL again. From there, he has one of the most loaded HockeyDB lineups the world has ever seen. 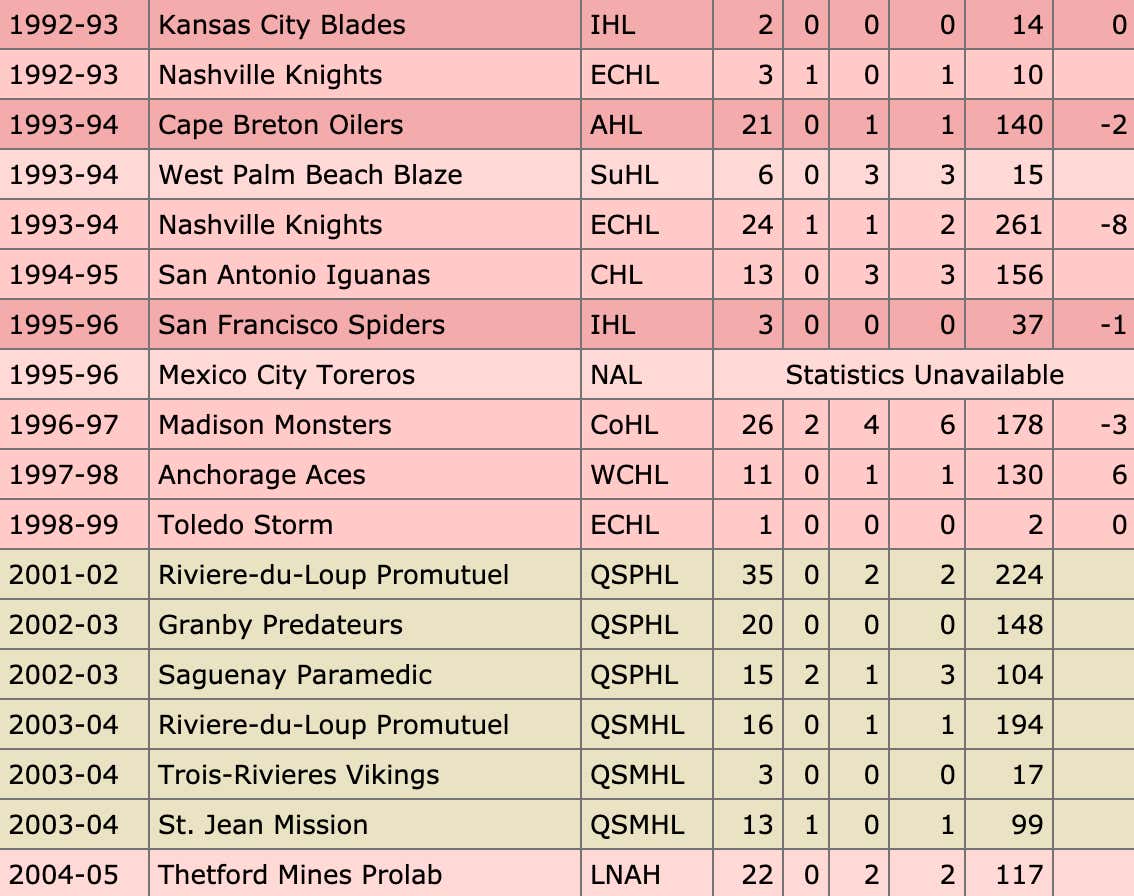 17 different teams in 11 different leagues over the course of 11 seasons. And that doesn't even take into account the 8 games he played for the Sacramento River Rats in Roller Hockey International during the summer of '94. 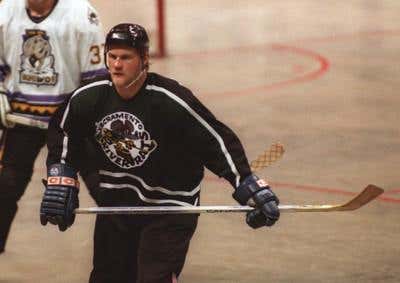 He was kicked off the team after 8 games for beating up the team trainer.

Unfortunately his career came to an end in the LNAH, as most careers end up doing. But the crazy thing is that the LNAH is a league that is almost specifically designed for enforcers, a league in which there are more fights than actual hockey being played, yet The Missing Link found himself on the one team with a coach who hated enforcers. So during one game when Gaetz was stuck on the bench for the entire first 2 periods, he ended up just getting changed out of his gear during the 2nd intermission, went up into the stands, grabbed himself a hamburger and ate it right behind the bench. That ended up getting him suspended by the team for the rest of the season. But that wasn't going to stop The Missing Link from chucking knucks. Because even in his street clothes, he was always ready for a rumble.

He's the guy in the red shirt who ends up unloading on a coach. What a fucking maniac.

And all of that is pretty much exactly how you'd expect the career of a guy who got drafted with 2 black eyes because he just got in a bar fight the night before to go. The Missing Link, ladies and gentlemen. Let we never forget his rightful place in the hockey history books.