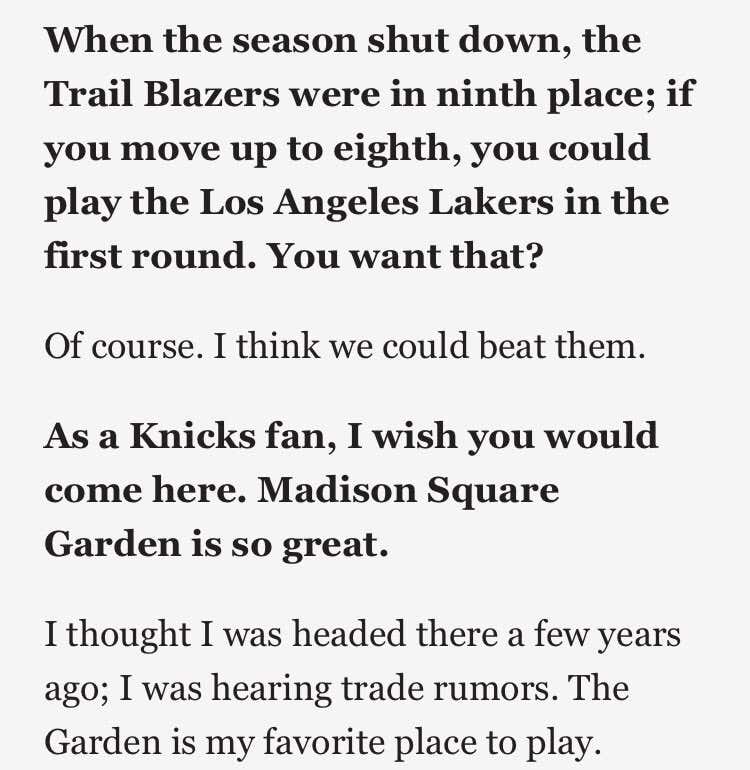 Look, I've learned to accept that I am never going to experience true happiness as a Knicks fans as long as James Dolan is owner. There will be little blips of joy like seeing a star player look really good in a Photoshopped Knicks jersey or the 4-5 games where MSG is roaring despite the team being absolute garbage. Hell, the Knicks even may hit on a pick like that did with a 7'3" sharpshooter that could also protect the rim, which is precisely the type of player that should thrive in today's NBA. But a guy like that will get hurt and jaded and force his way out of New York because the franchise is run by clowns as the Basketball Gods continue to kick Knicks fans in the balls until their scrotum is filled with nothing but a fine paste.

So to see Dame Lillard not only say he loves playing at MSG more than anywhere else on Earth like so many other great players but also say he thought he was heading here as a player that probably has a few #sources of moves that actually were going to happen is one of the few ways I can actually still be hurt by the Knicks. An awesome player like Dame Lillard who seems to thrive on getting disrespected would have been a match made in heaven for Knicks fans at The Garden.

I'm sure whatever caused this trade to fall through will be revealed in the coming weeks, which I can almost guarantee will make the Knicks look like even bigger idiots all the way until they sign Dame to a massive deal when he is on his last legs.

As always, fuck this franchise.