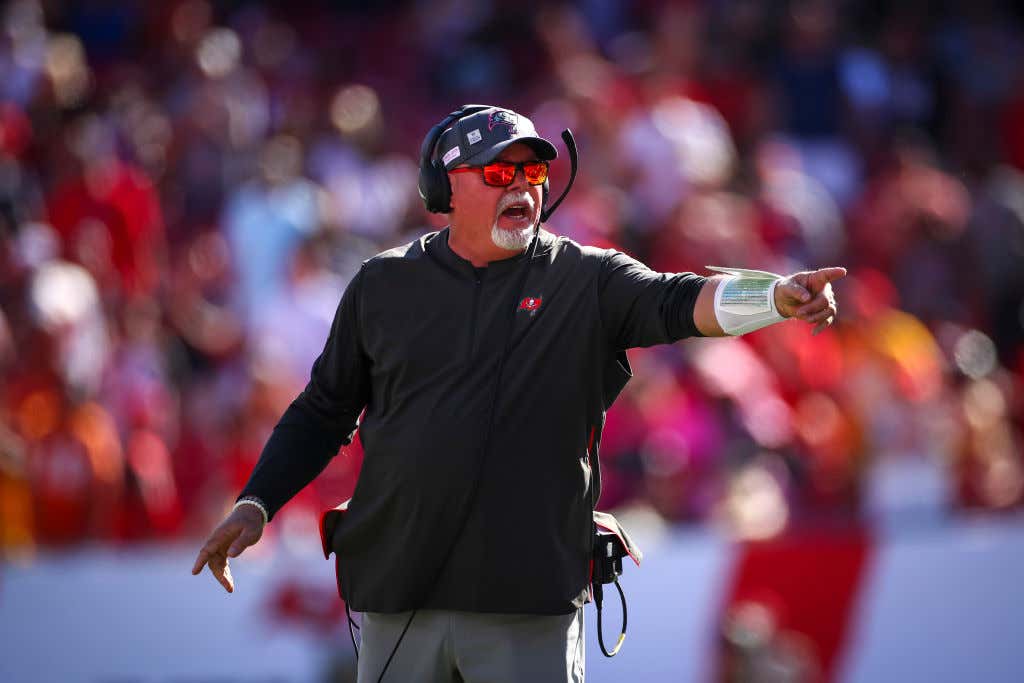 PFT- Among the questions that have to be answered about the coming NFL season is how teams will deal with players testing positive for COVID-19 and one thought that came to our minds recently was keeping a third quarterback on the roster but away from the team so that he’d be healthy if the team needed him to step up in the case of an infection. Buccaneers head coach Bruce Arians has had the same thought. Arians made an appearance on former NFL defensive end Chris Long’s podcast and Long asked him about the prospect of keeping a quarterback away from the facility during the season.

“Yeah, that’s one of the things I’ve been pondering the last two or three weeks as we set the protocols,” Arians said. “From what I’m understanding is if you test positive, you get quarantined for two weeks. Now, if you have no symptoms, I don’t know what that means. Is it a false one? There’s so much to learn and still explore with this thing, but I’ve thought about keeping the third quarterback on the roster out of the room. We have two guys that have been in our system, really sharp. So, I might have to quarantine a quarterback just in case of a quarantine.

I mean this is an absolute no-brainer if you are any NFL team let alone the Tampa Bay Bucs, right? I'm not sure if you guys knew this, but quarterback is the most important position in sports and the coronavirus spreads pretttttttty easily. (Source: Everything I've ever read about quarterbacks or the coronavirus). To lose your entire QB Room for at least 2 weeks to #stopthespread because a virus you know is super-infectious went through the locker room would be gross negligence.

However, Bruce Arians needs to go above and beyond all sorts of CDC guidelines to make sure his team doesn't go from a trendy Super Bowl pick to throwing away the season because they had to sign a QB with no knowledge of the offense off the street to start at least a couple games without any because EVERY GAME MATTERS IN THE NATIONAL FOOTBALL LEAGUE (Source: Everything I've ever read about the National Football League). The Bucs have a starting QB so old that he may end up cooked if he catches the bug, just signed a partying tight end that seems like the perfect Trojan Horse to introduce The Rona into the locker room, and oh yeah reside in the middle of fucking FLORIDA who already has videos like this on their resume that includes being the craziest state in the union.

Fuck having his third-string quarterback in quarantine. Bruce Arians should have 53 Bubble Boys showing up to practice every day with condoms on their dicks 24/7, which obviously won't happen because a man who once drank paint clearly doesn't worry too much. But at the very least, I demand QB3 Ryan Griffin be placed in the pirate ship at Reliant Stadium either until the pandemic is over or he is called into action because Tom Brady and Blaine Gabbert got corona.

P.S. I just thought of a scenario where the coronavirus runs rampant in the NFL, which leads to the return of Tim Tebow and the happy ending we never got during that preposterous winning streak. God I hope whoever is in charge of this simulation we are living in runs that story next.