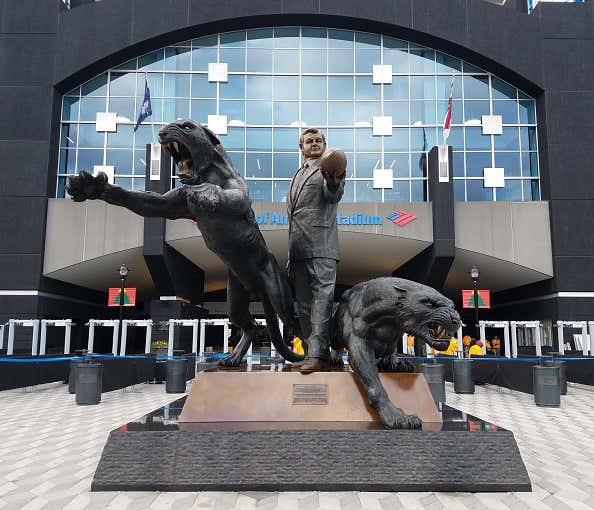 PFT - The Panthers have already parted ways with a longtime sponsor in the last week because of racially insensitive language.

Now, they’re clearing out another chapter of the team’s history which ended poorly.

According to Joe Bruno of WSOC, the statue of Jerry Richardson is being removed from outside Bank of America Stadium.

Richardson opted to sell the team after allegations of workplace sexual harassment and racially insensitive language toward a former scout.

When David Tepper bought the team from Richardson in 2018, he said he was contractually obligated to keep the statue on stadium grounds.

But with the national conversation changing in the last two weeks, Tepper seems to have found a way around having that reminder of Richardson’s final days in charge of the team on the property.

The times they are a'changin'.

These are tumultuous times indeed when people no longer have respect for permanent tributes to backwardsass old redneck perverts who build statues to themselves like they're fucking pharaohs, cast into bronze for all eternity.

In case you need a reminder of what's so controversial about this particular monument to one creepy old bastard's ego, this is from Sports Illustrated in December of 2017:

Friday was Jeans Day, when most staffers at the Carolina Panthers team offices would wear denim to work. The female employees knew what that meant. As the team’s owner, Jerry Richardson, made his rounds on the way to his spacious office, he would ask women to turn around so he could admire their backsides. Then, in his rolling Southern drawl, he’d offer comment, drawing from a store of one-liners he’d recycle each week. Among those in heaviest rotation: Show me how you wiggle to get those jeans up. I bet you had to lay down on your bed to fit into those jeans. Did you step into those jeans or did you have to jump into them? ...

Multiple female employees recalled to SI that Richardson asked them if he could personally shave their legs. ... One former female employee recalls Richardson, who stands 6'3", arriving barefoot and asking for a foot massage. Says one such invitee: “The first time, you thought it was an important meeting with the owner. You [then] realized it was never anything that couldn’t be discussed over the phone.” Others talk of Richardson giving back rubs that lingered too long or went too low down the spine.

Richardson was also known for what multiple women call the “seatbelt maneuver.” He would invite female employees out to lunch, and in keeping with his reputation as a self-styled gentleman, he would open the car door for his guests. Once they were seated, however, he would insist on fastening their seatbelt for them, reaching across their lap and brushing his hand across their breasts before putting the belt in the clasp.

SI learned that on multiple occasions when Richardson’s conduct has triggered complaints—for sexual harassment against female employees and for directing a racial slur at an African American employee—he has taken a leaf from a playbook he’s deployed in the past: Confidential settlements were reached and payments were made to complainants, accompanied by non-disclosure and non-disparagement clauses designed to shield the owner and the organization from further liability and damaging publicity.

So in his time owning the Panthers, Richardson was a dual threat who could play both ways. Capable of creeping on his female subordinates one minute and then being racist towards his minority employees the next. Basically the NFL's Harvey Weinstein and Papa John in one package. With a signature maneuver in the car that is practically a direct ripoff of Frank Costanza's "Stopping Short" move, only stationary and not at all a laughing matter. So his 13-foot, 4,500 pound deranged attempt to immortalize his own glory could be considered a target by women in Pussy Hats or guy in Black Lives Matter masks if somebody didn't haul it away first.

Let this be a lesson to all cities. Greatness is sports is a pyramid. Hall of Fame inductions are the third level from the top. Retired numbers are the second. And the absolute peak is statue-worthiness. So choose your statues wisely or don't build them at all. Nobody's perfect. You don't have to wait around to find a flawless human being to build a statue otherwise the sculpting business would go under. Just make it a point to ask yourselves if it's really necessary. For instance I live in a city where we have statues to Red Auerbach, Ted Williams, Larry Bird and Bobby Orr. The worst thing you can say about them is that Williams was a shitty father until he was about 70 and Bird wasn't big on picking up dinner checks. But those tributes to them can stand until they're reclaimed by Nature and no one will ever have a story about them harassing women or slurring African Americans. On the contrary.

So what they're doing in Carolina right now is probably for the best. If for no other reason than it gives me the opportunity to play one of my favorite sound clips of recent vintage: This old perv whimpering like a dog who needs a walk in the worst way. (Cued up to the 1:14 mark):

Gets me every time, right in the gut. From having so hard I cramp up. So long, asswipe.