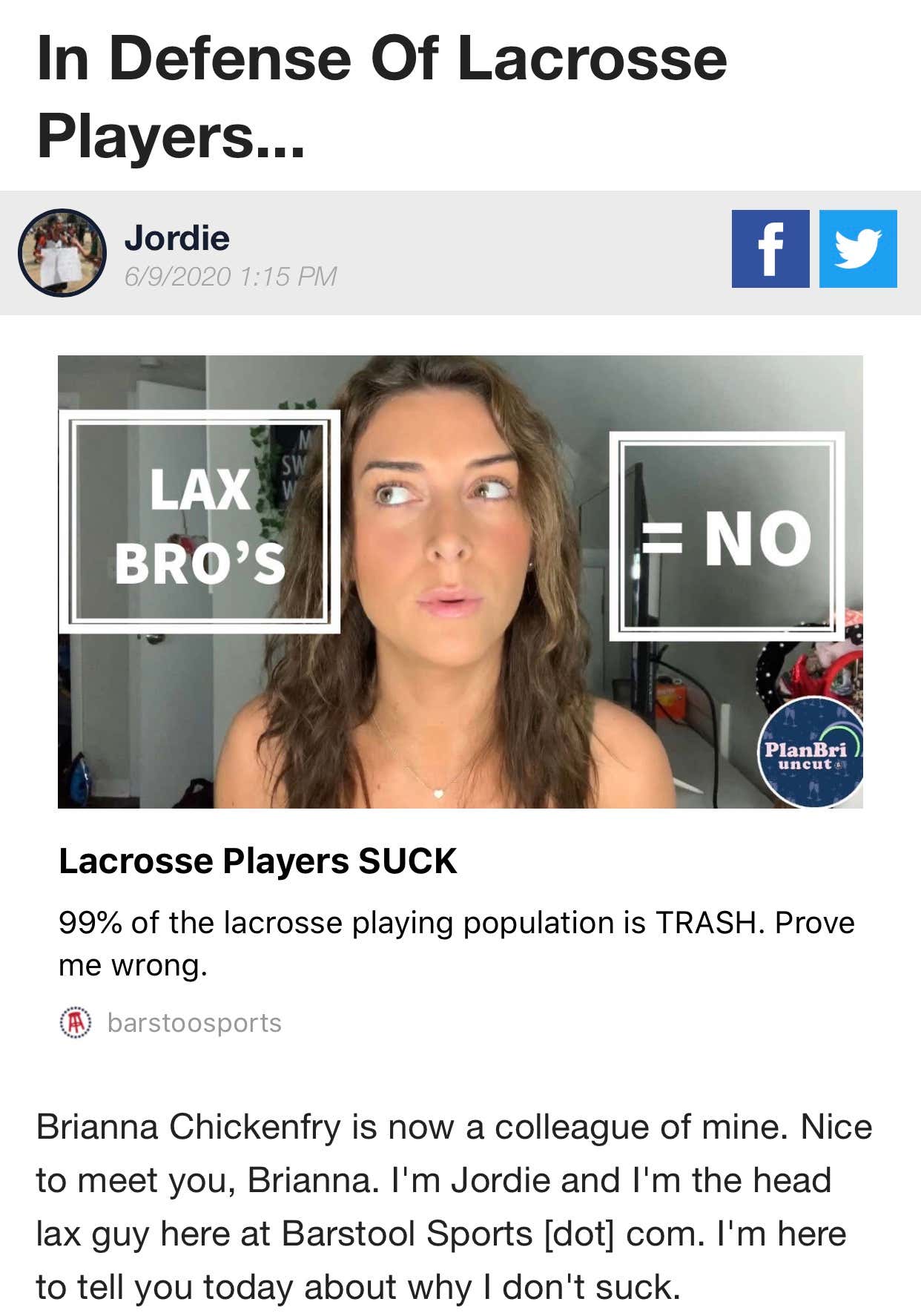 As you may have seen, Jordie who claims he is the head lax guy here at barstool took the time to try and rebuttal my video on why lax bro’s suck so badly. Hey Jordie, nice post but you made it too easy for me. Let me start by pointing out you took the time out of your C4 snorting, wall ball, cuddle-less day to try and prove lacrosse boys don’t suck. It seems to me as if you are a wee bit insecure Jordie. You claim I admitted “lacrosse boys fucking rock” the only think I stated in my video is that lacrosse boys have rocks in place of their brains. You made it a point to clarify you wake up extra early for practice, 5:30am to be specific. Wow amazing you wake up early to throw a ball around with a stick. You claim that puts lax bro’s one point above football players. The same football players who wake up at 5:00am to play a legitimate sport after a wonderful night of cuddling, hmm that one points not adding up.

You also claim lacrosse boys schedule their classes together to benefit the professors. You say this like the only time lacrosse players miss class is for game day? In my 3 years of college, having numerous classes with lax bro’s the only time they come to class is to take a test. Lax bro’s skip class to play Call of Duty while drinking mountain dew and snapchatting 17 different girls, 5 of those girls still being in high school. My point being, lax bros don’t know what a conservatory is because they don’t take the time to go to class and learn new words for their vocabulary. Their vocabulary that consists of “bro”, “sex”, and “beer”. Actually, I take “beer” back I’ll give that word to football players, lax bros can have “white-claw”. Seems more fitting.

You want to believe people don’t like lax bros because of the hateful stereotypes placed upon you all. I’ve tried Jordie, I’ve really tried. I once encountered a lax bro who cried to me for 45 minutes because his parents refused to stop paying for his gas. I can’t make this shit up. I will give it to you the sick flow is all you guys have going for you. You are treated like the Nickelback of the athletics world because you are the Nickelback of the athletics world my friend. I admire your enthusiasm towards your lacrosse community or for lack of better words, cult. But until these lax bro’s start proving me wrong, it’s like the bottom of the ninth and you’re never gonna win.