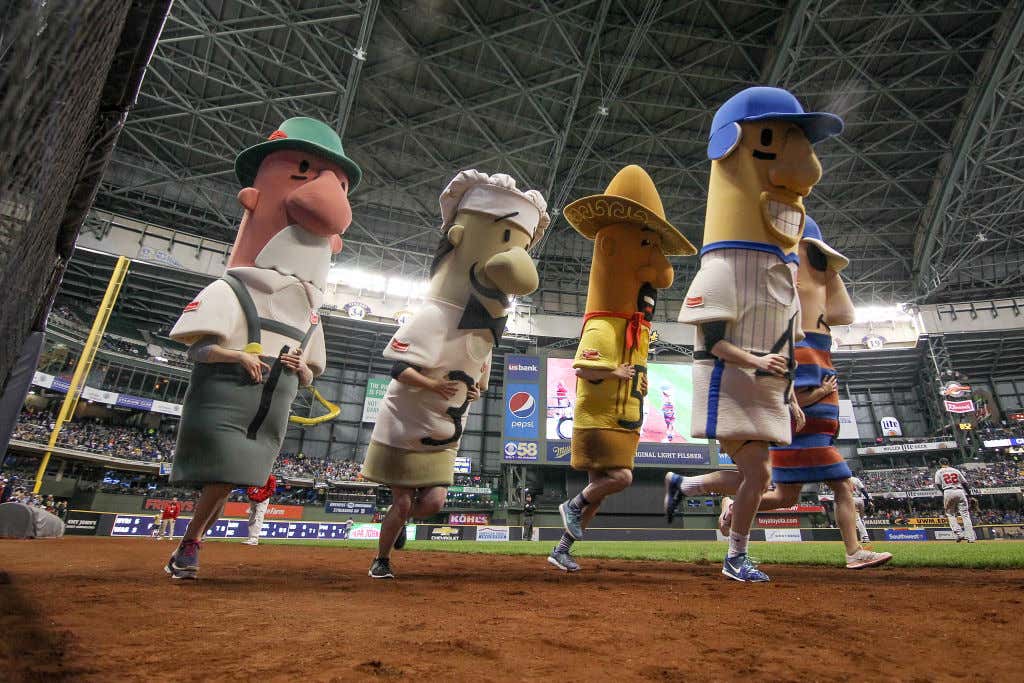 The intruder who entered Miller Park’s playing field last week is accused of taking a joyride on a tractor and using it to try carving his name in cursive on the grounds, causing $40,000 in damage.

Prosecutors charged Keyon A. Lambert, 40, of Milwaukee with a felony count of criminal damage to property and misdemeanor disorderly conduct.

The criminal complaint describes how Lambert entered the stadium on June 2 after finding an unlocked door and wandering to the playing field with grounds crew present. He told police he decided to commandeer the tractor because he had never driven one before and wanted to carve his name into the grass with the tires.

As a kid I was a big fan of trying any door to see if it was unlocked. There was no door too big or small to try. If you get in trouble you can just say you're a dumb kid and didn't know better. Probably a terrible habit to start, but that's what appears our friend Keyon Lambert was doing in Milwaukee last week when he stumbled into Miller Park. The door was unlocked and he took that as a sign from God to enter and commandeer a tractor. The idea of having a baseball park to yourself is pretty awesome so Lambert jumped on the opportunity. We're all under a lot of stress these days, some times you just need to get on a tractor and ride around a field for a bit to let loose. I don't hate the move.

Lambert hopped on the tractor, even though he'd never been on one before, and tried to draw his name in cursive in the outfield. Maybe write like anything but your name if you're trying to not get caught? It's possible he knew he was going down at some point and there was no escape so he didn't care, but maybe go for a message next time so you don't immediately incriminate yourself.

I feel like it's also an OUTRAGEOUS move to go cursive instead of a normal print given it was his first time ever on one. Who do you think you are? Some tractor savant? I can barely write my own name on paper in cursive. No fucking chance I'm coming close on a tractor. That shit would come out looking like a whole different language.

Of course none of this worked and the tractor did not go fast enough to do anything he wanted.

The tractor didn’t move fast enough for that to happen, but Lambert nevertheless drove across the field while raising and lowering the front bucket, damaging the pitcher’s mound and digging holes elsewhere on the field, according to the complaint.

Lambert did start to notice he wasn't alone. Turns out there were a few grounds crew workers at the field with him watching him go. They all had their phones out since this crazy dude was driving around in a goddamn tractor causing all sorts of havoc. Lambert's response to seeing the people? He wanted to "show off" for them! What does that even mean?

Lambert told police he saw workers recording him with their phones, "so he decided to show off," the complaint said. He also shouted various things at grounds crew workers so they would stay away from him, he told police.

I respect this dude's balls I just think he did Miller Park wrong. If you break in you HAVE to go for the slide right away. Nothing else matters. You break into Miller Park and go down the slide you're a goddamn hero. You also need to run the bases without question. The name was a nice thought, but completely unreasonable. Cursive is just a preposterous move. Now you probably owe a ton of money for the damages and have nothing to show for it. Big time missed opportunity by Keyon.
sports+ 6 Tags