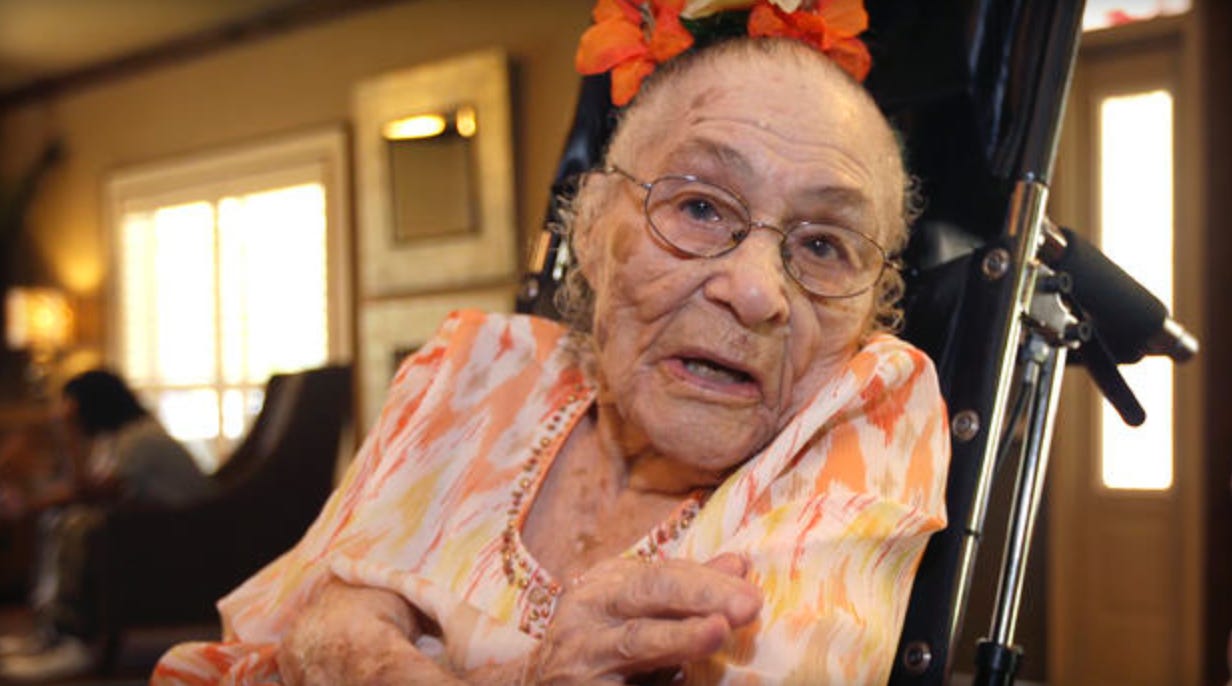 LITTLE ROCK, Ark. — Just days after becoming the world’s oldest documented person, 116-year-old Gertrude Weaver has died Monday in Arkansas. Weaver became the oldest person in the world after the death of a 117-year-old Japanese woman last week, according to records kept by the Los Angeles-based Gerontology Research Group. Weaver was born in 1898. The Williams Funeral Home confirmed Weaver died just after 10 a.m. Monday at the Silver Oaks Health and Rehabilitation Center in Camden, about 100 miles southwest of Little Rock. Camden Mayor Marie Trisollini chatted with Weaver last week when the supercentenarian’s roommate celebrated her 100th birthday. “She was a really sweet lady. She was relatively perky and coherent when I talked with her before the party,” Trisollini said. “When you asked for advice on how to live a long life she would say, ‘Use a lot of skin moisturizer, treat everyone nice, love your neighbor and eat your own cooking. Don’t eat at fast food places.'” The Research Group was able to verify Weaver’s age using census records and a marriage certificate from 1915 that listed her age as 17. Other records pointed to a possible April birthday, but since those could not be confirmed, the group used the day Weaver had always celebrated her birthday – July 4. Trisollini said the nursing home and several members of the community had been making plans for Weaver’s 117th birthday party.

6 days!  Heavy lies the crown.  She’s like the Marlo Stanfield of old people.  Doesn’t matter how long she got to wear the crown, point is she wore it.  Oldest people in the world just dropping like flies.  It’s recently been a game of hot potato with who wants the crown and who’s still breathing.  Here’s to hoping Gertrude really tore it up for those 6 days where she was king of the world.  Hit a few bingo spots, forgot where she was, ate some Werthers Originals and really went out with a bang.  Is it more or less shocking that these people are dying left and right?  That might seem like a weird question.  The obvious answer is they’re all about 115 years old.  Of course they’re gonna be going down quickly.  But I feel like once you make it over that 110 year old hurdle you might just go on and live forever.  Clear 110 and the sky is the limit.  If you’ve staved off death for that long then you clearly know what you’re doing.  So it’s Next Man Or Woman Up for oldest person in the world crown.  Who wants it?  Who’s got the drive and determination and completely random chance to stay alive when all of your friends are dead?  Come on down!

PS- If I even sniff 90 I’m taking my talents off the nearest bridge.  You think people who live that long are happy?  Doubt it.