Sammy Sosa week continues with this full length edition of the 1999 Home Run Derby featuring Mark McGwire, Sammy Sosa, Jeff Bagwell, Larry Walker, Ken Griffey Junior and Nomar. One of the all time star studded derby lineups and holy shit did it disappoint at times. Sosa finished with one (1) home run while Walker and Nomar averaged one-and-a-half (1.5) over the entire contest. Absolutely disgusting to think about but also yet another strong argument in favor of Sammy never using steroids. After all, there's no positive test - just a bunch of speculation. And my brain can't speculate around him laying a fucking dud at Fenway in his follow up tour to 66 home runs.

Another thing - home run derbies are supposed to be better these days because there's more home runs but for my money I actually like watching these guys fail. I remember in 2001 when Brett Boone swung and missed. That was fucking awesome because for a moment we were all Brett Boone. We all sucked. They need to bring back guys hitting 1 home run in a round and getting boo'd back to the clubhouse buffet.

But probably most importantly to me as a Cubs fan is that Sammy bounced back from the embarrassment the very next year when he absolutely bulldozed the field in what's considered the greatest home run derby performance ever for all time ever without controversy so shut the fuck up: 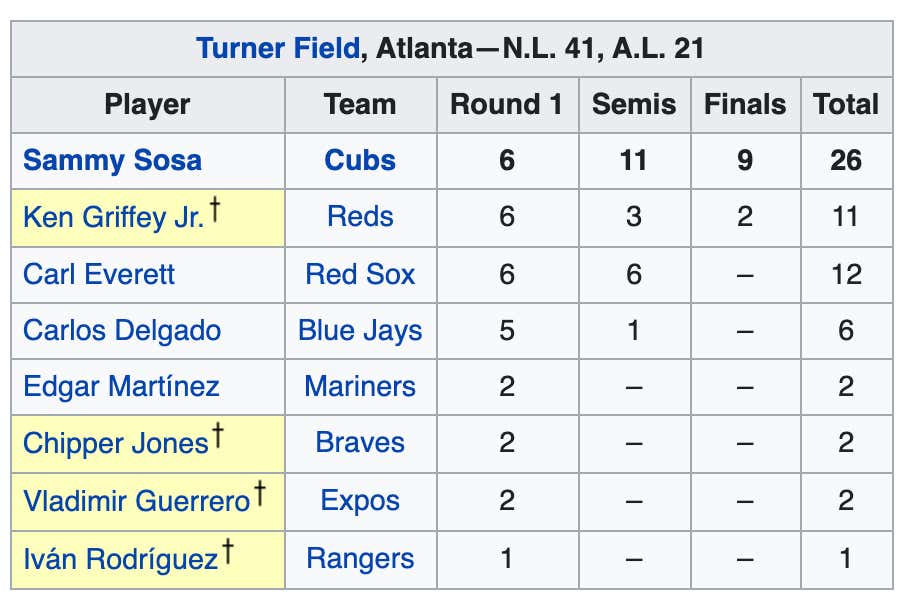 Some light observations on the field before I send you on your Tuesday:

- 5 hall of famers in one derby field