Previously on the 'Angel Hernandez is terrible at job' saga he was seen filing a discrimination suit against MLB claiming he wasn't being picked for World Series games due to race. It actually had nothing to do with race and was solely because he stunk at job so much he wasn't worthy of such a promotion. Every single player in baseball hates the sight of this man on a field. They know a shit show in on deck almost guaranteed. As part of the suit he had to undergo an 8 hour psych evaluation. I've been dying to know the results of that test since the story came out.

Now in the latest installment Hernandez has been caught spying on an MLB investigative call where they were discussing how he doesn't know the rules to the sport. Cue the "hey finally a call Hernandez didn't miss" jokes.

I feel like if baseball isn't going on and you're still catching heat for being a terrible baseball umpire/employee that's probably a sign you should be fired. At some point enough is enough right?

Last July Hernandez was the crew chief for a Rays-Red Sox game. During the contest there was a 14 minute delay because no one knew the rules to what was going on. Hmmmm! Sounds right up Hernandez's alley if you ask me. MLB conducted a call with Hernandez in August to discuss the incident and hear his side. After Angel was done being interviewed they told him to get off the call as they brought on Ed Hickox, another umpire during the game, to talk about Hernandez's performance and what happened. Instead of getting off the call he just stayed on silently and eavesdropped as they probably went on to shit-talk him.

As a result, we have concluded that you remained on the line in an effort to intentionally and deceptively eavesdrop on a confidential conversation in order to hear what Hickox would say about the July 24 incident. This is an egregious offense.

Now I'm pretty confused as to why MLB didn't just do two separate calls in the first place, but still what a move by Angel. I feel like that's something you do as a child when you were in trouble. Angel Hernandez is 58 years old.

Here are a few other incidents that he's fucked up in his career that MLB is using in their on-going fight against him. Keep in mind we could fill up enough pages for a Harry Potter book if we wanted to here. 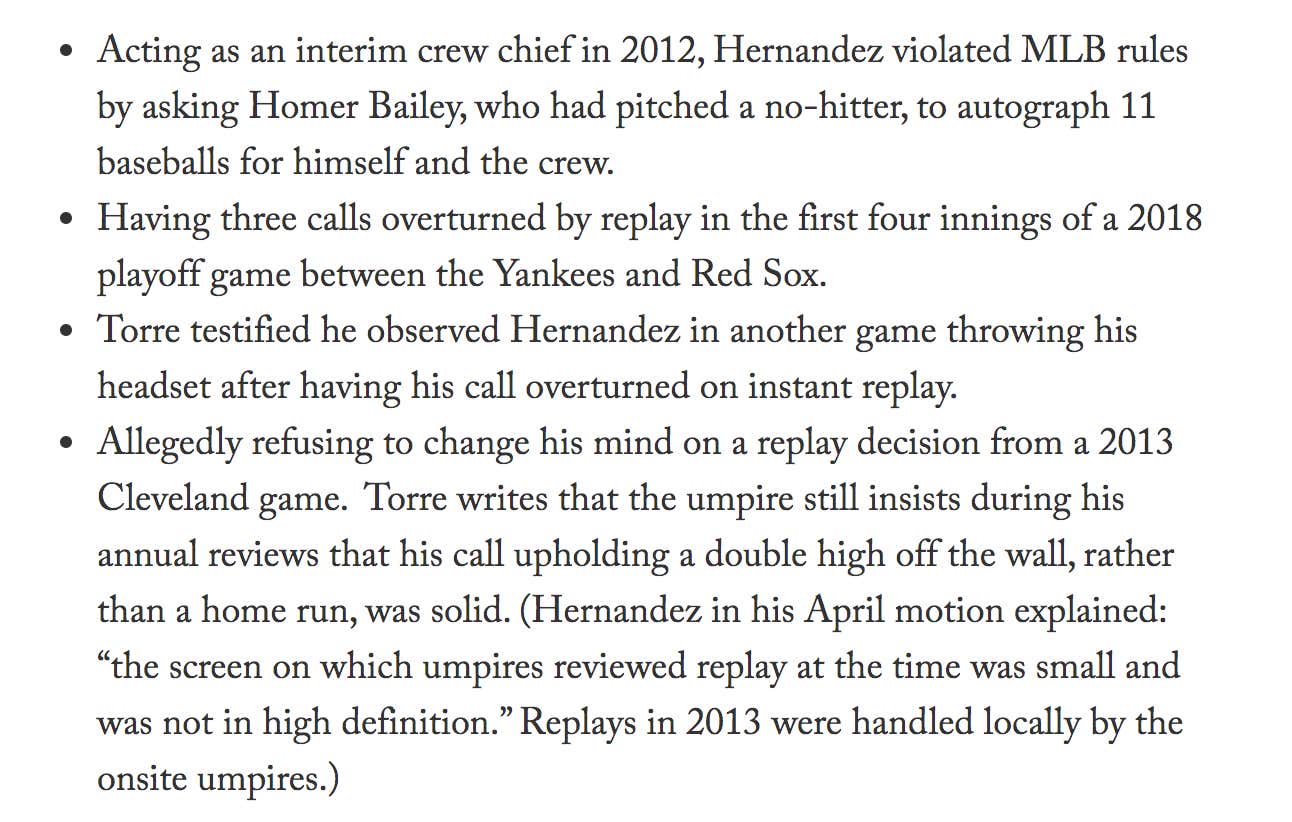 The last one about the A's-Indians game is ridiculous and sums up Hernandez perfectly. I mean look at where this ball hits.

They went back, reviewed the play, and still ruled it a double! To this day he calls it a double despite it laughably being a home run. Guy is the WORST. It's Cowboy Joe and Angel. You see those guys on a baseball field, you best run the other way and you'll probably get ejected doing so.