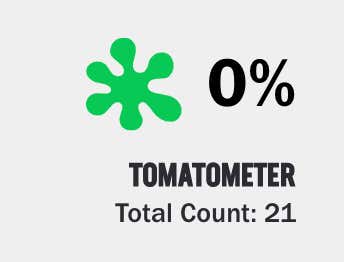 Digital Spy - Movie makers may sometimes say that they aren't bothered by negative reviews but scoring a 0% rating on film and TV review site Rotten Tomatoes isn't generally something they'd aim for.

Unfortunately new Netflix movie The Last Days of American Crime has become the latest film to score that unwanted 0%, meaning not a single critic has rated it positively so far on the site.

It now joins the likes of 2018's John Travolta-starring Gotti and Adam Sandler's 2015 western comedy The Ridiculous 6 on the list of 0% Rotten Tomatoes movies.

Here's the correct take on this- I'd much, much rather make a 0% movie than a 50% movie on Rotten Tomatoes. When you are the 0% movie, you start entering that "so bad it's good" category where people will watch it to see just why it scored a 0%. When something has a 20% though, you just know it's a waste of time and a stinker. You never want to be in that very low % because you are clearly skippable. But "Jack and Jill" clocking in at 3%, you have to watch to see why it's considered one of the worst movies of all time. Bucky Larson, another 0%, one of the worst movies I've ever seen, go watch it immediately. But then you have Outside Providence. 51%. Is anyone really going to watch Outside Providence? Nobody cares about a 51% movie. It just exists. Is there really any benefit to being Outside Providence over "The Last Days of American Crime"? I say no, it's much worse.

So congrats to everyone involved in"The Last Days of American Crime". I probably will give it a go this week. I'm actually now looking forward to it. Sometimes I feel they make 0% movies on purpose to get some buzz. Guess what? It worked. I will report back. Besides, no way it can be worse than CATS.