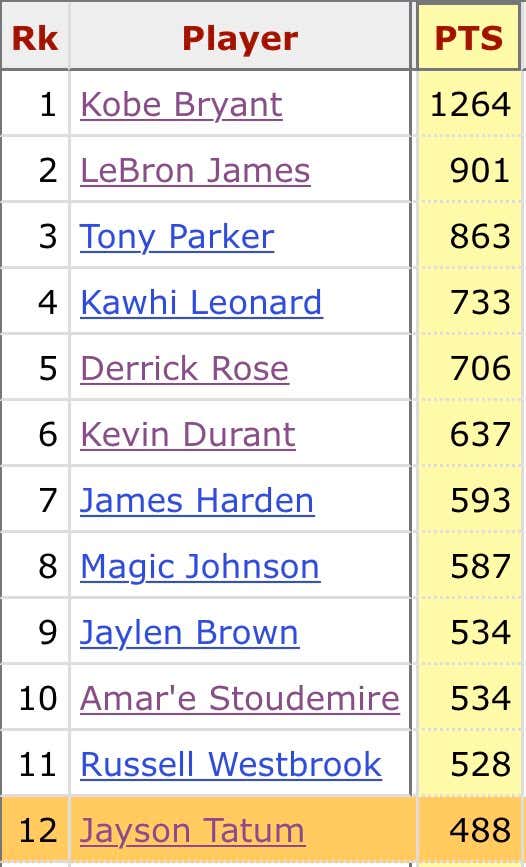 Before we get into this topic....uhhhh holy shit Kobe. I had to double check just to make sure what my eyes were telling me was real but it's true. From the 1996-97 season to the 2000-01 season Kobe played in 66 playoff games, 2,219 minutes and had 1,264 points before turning 23. To put this into perspective, in two separate playoff runs (1999 and 2000) Kobe had nearly the same amount of points as Tatum has had in his entire playoff career. Beast.

But we're not here to talk about Kobe. We're here to talk about the two Jays and their development as two legit playoff scoring options. We all remember what happened the last time this team relied on their two young wings to be majoy playoff contributors, they went deep and were a poor last 6 minutes away from the NBA Finals. When I saw this tweet this morning, I cleaned up after myself and decided to dig even deeper into what these numbers were telling me. You see, we all love Tatum. We understand he is the #1 option of the future and has a chance to be one of the best Celtics of this era. But we cannot forget what we are also seeing from Jaylen Brown.

It's sort of like this season. Tatum took a massive leap towards becoming a superstar, but very quietly Jaylen put in a highly efficient All Star caliber season. So when you think of their playoff chances and weapons they'll have, a lot of people will talk Tatum before talking Jaylen and I'm not so sure that's fair. In Jaylen's rookie season he played only 215 minutes in 17 games scoring 85 points. So when I really think of comparing Tatum/Jaylen and their postseason production, it really starts in the 2017-18 season. That means it breaks down to this:

You could absolutely make the case that of the two  Jays, Jaylen has actually been the better postseason player. When he had a 24.6% usage rate during the 2018 playoff run combined with Tatum's 23.3% usage, they both averaged at least 18 points a night. Last season both of their usage numbers dropped with Kyrie back and his 29.8% usage and things clearly didn't work. I think that's a valuable lesson for this postseason run and how the team uses Kemba. During the year the usage splits went like this

I think once we get into the playoffs, this has to shift slightly. I know Kemba is a max player, but when I think of how teams will defend him in terms of trapping hard and then targeting him defensively on the other end, the Celts would be better served playing through the two Jays first. We've seen what happens when this team over relies on their scoring point guard. It doesn't exactly work and that was the case with both Isaiah and Kyrie. The key to playoff success is your two way wings. That's how shit works in today's NBA and the beauty of this roster is both Jaylen and Tatum have shown the ability to carry the load in a playoff run. It's a true pick your poison situation that many teams would love to have.

I imagine once the games start up again the national media will pick right up where they left off and will talk non stop about Jayson Tatum, as they should. But the key to what makes this Celtics team a legit contender is the fact that their other under 23 two way wing is just as much of a playoff monster. Nobody is really going to talk about it, he's not going to get the respect he absolutely deserves, but I love that for Jaylen. We've seen what a motivated Jaylen Brown can do and if the Celts are going to even consider making a deep run they are only going to go as far as the two Jays will carry them.

Luckily for us, they have experience carrying this team pretty deep. 53 more days. We can do it.