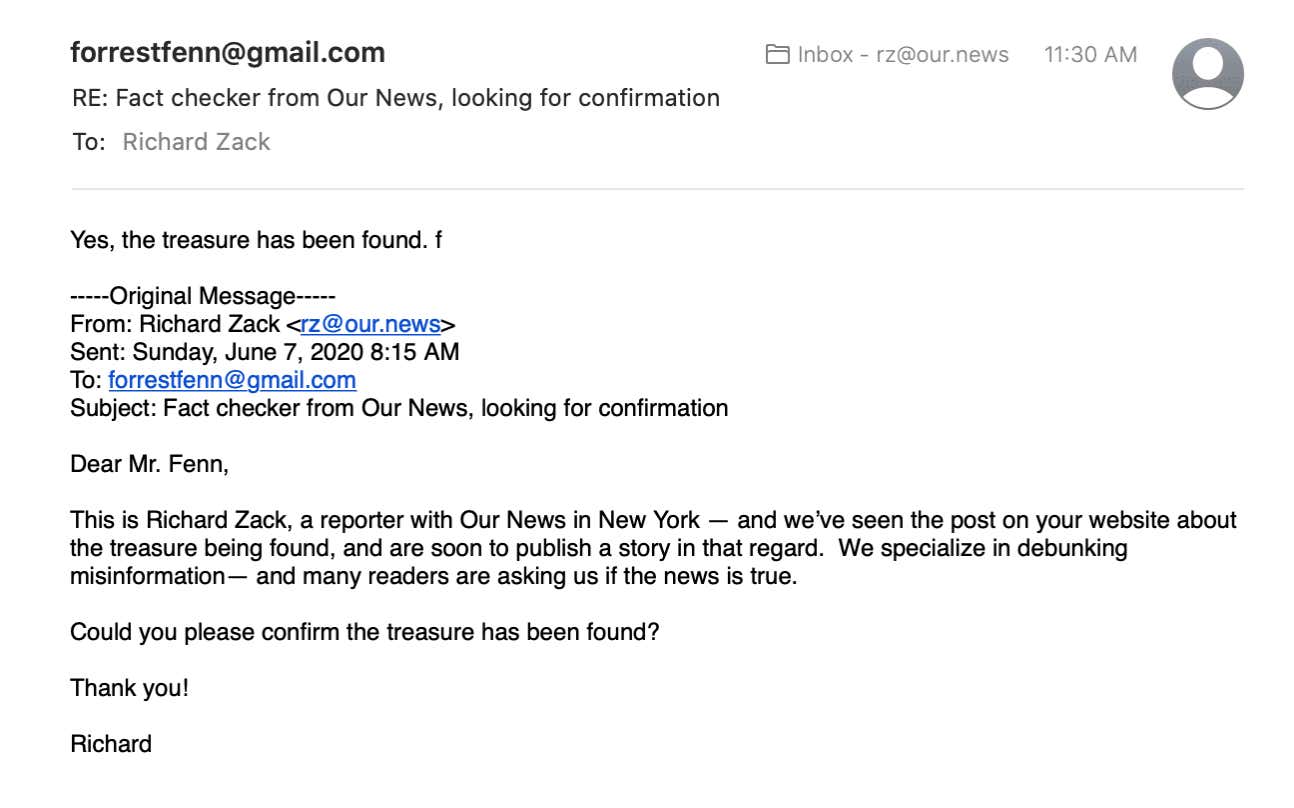 CNN - Thousands of brave souls have ventured into the Rocky Mountains for the past decade, searching for a treasure chest filled with gold, rubies, emeralds and diamonds. But that adventure has finally come to an end. The treasure has been found. Forrest Fenn, the 89-year-old art and antiquities collector who created the treasure hunt, made the announcement Sunday on his website. "It was under a canopy of stars in the lush, forested vegetation of the Rocky Mountains and had not moved from the spot where I hid it more than 10 years ago," Fenn wrote in his announcement. "I do not know the person who found it, but the poem in my book led him to the precise spot." The treasure, estimated to be worth over $1 million, was a way for Fenn to inspire people to explore nature and give hope to people affected by the Great Recession, he said. Clues leading to the treasure's location were included in a 24-line poem published in Fenn's 2010 autobiography "The Thrill of the Chase." Fenn estimated that as many as 350,000 people from all over the world went hunting for the treasure, according to the New Mexican. Some quit their jobs to fully dedicate their lives to the hunt and some even died. "I congratulate the thousands of people who participated in the search and hope they will continue to be drawn by the promise of other discoveries," Fenn said on his website.

You gotta get up pretty, pretty early in the morning to pull one over on old Treasure Huntin' Clancy. There is absolutely no way this infamous treasure is only worth a million dollars. Not no way, not no how. The reports say "Over $1 million." Which has me thinking like, you mean, 100? Is it 100 million? Because thats "over" 1 million. Aint no fucking way Forest Fenn went through all this trouble to create one of the greatest and only modern day treasure hunts for a measly 1 million dollar prize. You gotta think bigger than that. We're talking about an adventure story. Some National Treasure shit. Some Goonies shit. Pirates of the Caribbean, Treasure Island shit. Da Vinci Code up in this motherfucker. Guys like Forest Fenn and the dude who found this treasure are real life Indiana Joneses. Those guys dont get out of bed in the morning unless you're taking about a treasure of deep, deep value to humanity. You think Indiana Jones would go to the Temple of Doom or embark on the Last Crusade for like 900,000 bucks? For sure not. You can win that on like a 5 dollar scratch off in 2020. And 1 Million wouldnt even be the grand prize.

No, this is all part of a greater story. Think about when you see those movies. There's always one extra twist or another secret unveiling the true treasure. One last reward for the good guys who went about it the right way while the greedy bad guys went off thinking it was all over. Plain and Simple theres just no goddam way a dude this entire saga was for a sum of money that will last you like, 6 years in todays world. Think about the details:

1) The dude hiding the treasure is named FOREST FENN. This is important. Its like an Elon Musk situation. You think if Elon Musk was named Joshua Silverstein, he'd be the man who he is? No. What's in a name? Everything. Forest Fenn plays for keeps. He plays for high stakes. WAY higher than a mil.

2) 5 people died for this treasure. Ranging from falling off cliffs to mysteriously washing up in rivers near Yellowstone Park. People keep citing that its believed over 350,000 people engaged in this hunt, but thats nonsense. Thats everyone who ever hiked in Yellowstone and said "lets read the poem and find the gold!" and then gave up after 45 minutes. I bet the number of real treasure hunters is far far lower and to have 5 deaths seeking this booty out leads me to believe the value is far far higher than reported.

3) Forest Fenn has had his run ins with the FBI regarding antiquities law and ownership over artifacts. Federal agents had raided his home in the past, seizing valuable and priceless items believed to be illegally obtained. Art collectors and dealers were raided, and some were arrested under the mission of...cracking down on the black market for artifacts?? What? The items listed to be found and confiscated by the FBI were "human hair, a feathered talisman, and a buffalo skull." Now you tell me why the fuck these guys give a shit about these dumb ass museum items? Oh and did I mention three people involved in this investigation KILLED THEMSELVES. WHAT??? Listen since when do the fed give a fuck about archaeological discoveries and shit? Since when are people fucking offing themselves for being investigated for trafficking artifacts?? They dont, and they arent. Something much much larger is at play here.

Forest Fenn said he wanted to encourage people to get out and have an adventure. Just like a good old fashioned scavenger hunt! He just wanted to people to get out in nature and enjoy the fun! Now you're telling me that man is ok with having the blood of 5 people on his hands for people to just experience nature?? Parents burying their children and loved ones identifying dead bodies washed up in the river for you to play Long John Silver?? Cmon people. Use your fucking head. We've got dead bodies, FBI investigations, and mysterious suicides. There is NO way that was Forest Fenn's plan and theres NO way the treasure isnt worth more than ashtray money.

My thought? The people in the know understand whats really at stake. From the hardcore hunters to the FBI, people who are really in the loop know that Forest Fenn hid a massive fortune - or perhaps something less quantifiable? I'm thinking information. Government secrets. Historical mysteries solved. I'm thinking like St. Michael's Church in Fort Walton, Kansas. Front pew, right leg. You wanna know who killed JFK? You want to answer one of the greatest mysteries this country has ever pondered? Thats what Forest Fenn really hid out there. Thats why he was OK with those deaths, thats why the FBI is involved, thats why people are suspiciously disappearing and killing themselves, and THATS why the person who solved this puzzle is staying anonymous and reports are simply that he just found a million dollars. Because this is a dangerous game played by dangerous men. One where having a big mouth and a big ego can get you arrested or killed.

And if thats not the case, then it should be the plot of National Treasure 3 because thats a fire fucking movie I just wrote. Or at least Outerbanks Season 2. JOHN B! JOHN B! WE FOUND FENN'S TREASURE JOHN B!