I'm sure they'll fire him soon because Knicks but as of now, Mike Miller might have a future as their head coach. When Miller took over in December, the Knicks were 4-18 (18% winning percentage). They rebounded to go 17-27 (39%) under Miller. Winning under 40% of your games isn't exactly "good" per se, but doubling your winning percentage is. Getting a mismatched team of youngsters and veterans to buy in after an abysmal start is impressive. Miller won G-League Coach of the Year in 2018 and while it doesn't guarantee success, past winners include Quin Snyder, Nick Nurse, and CPF Jerry Stackhouse. Hopefully, this shows that Miller knows what he's doing and should at least get an honest shot to coach the team longterm.

Former agent Leon Rose was named President of the Knicks and who knows if he'll be worth a damn? But nothing else was working so salute the Knicks for trying a different route. In THIS LEAGUE, Jeff Van Gundy, you just have to wait for the stars to pick you. That's it. Lakers hired former agent Rob Pelinka and they're sitting pretty right now. The Clippers and Nets shaped up for a season or two and just waited for the stars to choose them. Maybe Rose and the Knicks can follow suit.

RJ Barrett had a hot start and then an ice-cold couple of months. To his credit, his game started to pick up after the All-Star break (17/5/3 on 45/33/63 shooting in 11 games) and before the regular season was halted. There were enough highs (scoring 20+ points on 17 different occasions, ability to get to the line, and create for others) to talk yourself into a solid sophomore campaign for Barrett. Barrett also became one of just 13 players every to play at least 30 MPG during their age-19 season. The list is a mixed bag, but encouraging: 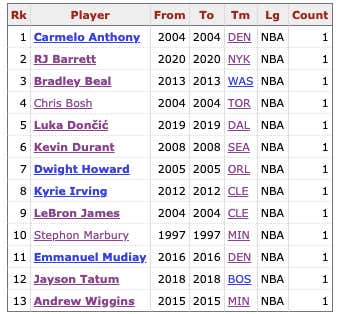 Everyone on that list except for Mudiay and Wiggins made at least one All-Star team. Is he more Marbury or Durant? Time will tell but I do think it's impressive a 19-year-old was even able to hold up to the rigors of chipping in 15 points per night while being asked to defend a perimeter player that's much stronger than you over the course of your rookie season.

Mitchell Robinson keeps kicking ass and maybe one day, he'll get to play a whole 30 minutes in a game. Robinson played 61 games this season and only hit the 30-minute mark in five of them. He led the league this season in FG percentage (74.2%), true shooting percentage (72.6%) and offensive rating (144 per 100 possessions). For reference, Giannis' ORTG this season was 116. Last year, Robinson' ORTG was 140 which goes to show this wasn't a fluke season. His block percentage was good enough for second in the league and he grabbed rebounds at a rate similar to John Collins or Julius Randle. He has to get more time than the 23 MPG he averaged this season. Some of this is on Robinson, as he fouls people a lot but he improved on this as well (5.7 fouls per 36 minutes last season down to 4.9 this season). He's a building block piece and everything the Knicks doing going forward should have him in mind.

Top 10 picks in three straight drafts and their best prospect is the guy they snagged in the second round. Not ideal. For all the promise that Barrett/Robinson showed, the Knicks' other young talent didn't progress the way you would have liked them to in a rebuilding year. Frank Ntilikina had an up-and-down season, as did Allonzo Trier. Kevin Knox and Dennis Smith Jr followed up bad 2019 campaigns with even worse showings in 2020.

In the players' defense, a midseason coaching change and having veterans signed to play over you has to be tough for growth. But the number of young players not progressing under the eye of the Knicks is concerning.

2. A little bit more tanking would have gone a long way.

This may not matter as last year's lottery reform showed. The Pelicans, Grizzlies, and Lakers each jumped at least six teams to all end up with top-four picks. It turned the Pelicans and Grizzlies trajectories around and gave the Lakers one more chip to trade for AD. The three worst teams last year (Knicks, Cavs, Wolves) ended up with picks three, five, and six for their troubles.

Then ON THE SAME DAY, they signed Julius Randle, Bobby Portis, Taj Gibson, Elfrid Payton, and Wayne Ellington. The next week they added Marcus Morris and Reggie Bullock. I understand that you don't want to just hand 35 minutes a game to everyone on a team that's 21 years old. I get that you want to add some competition for the younger guys. So maybe that means you sign Randle, Morris, and Payton to compete with the young guys and leave the others in the free agency bin.

Even then, you should be signing guys to supplement your young talent. Putting shooters like Ellington/Bullock around Barrett/Robinson makes perfect sense. A score-first forward like Randle or Morris with defensive-minded Robinson? For certain! But who knew that adding ballhandlers that can't shoot wouldn't mesh well with other ballhandlers that can't shoot? How could anyone have predicted that multiple defensively challenged big men wouldn't work together? HOW I ASK YOU??

Not all of them, of course. Just most of them. They did well to sign Marcus Morris and then get a first-round pick for him. The Warriors set a nice precedent for this last year signing Willie Caulie-Stein, Alec Burks, and Glen Robinson III this past summer but then moving all three during the season to playoff teams. They got a 2020 second-round pick for WCS and second-rounders in 2020, 2021, and 2022 for Burks/GR3. Extra second-rounders don't sound like much until Golden State is able to flip a couple of those next year for a couple of rotational pieces.

They have Gibson, Ellington, Bullock, and Payton each under contract for another season and I'd be calling any playoff team that needs bodies to see if I could get a couple of future picks for rental players.

2. Do not trade for washed/injured superstars

It's tempting, I know. NYK had the 30th highest payroll last year and can open up another $30 million in cap space easily if need be. Maybe Leon Rose is thinking that if he can get one star, they'll lead to the second star and the second star will get the third. Maybe so, but I'm not taking on any injured superstars with that hope. New York will have enough cap space to absorb the contract of a Blake Griffin/John Wall/Kevin Love. They might even be willing to help Philly out of a jam if they take on Al Horford's contract.

Don't do it!!! Last year, the Knicks had too much money to spend and signed a ton of veterans. I worry that they'll overcorrect this year and take on a bad contract attached to a star name as a way to hit the salary cap floor. If you're going to play the UFA game then at least wait until 2021 where there are more stars.

Instead, use your cap space to take a chance on younger guys that fit the timeline of your team. Brandon Ingram will have any offer matched by the Pelicans, but I'd still have a maximum offer sheet waiting for him. With the right offer, you may be able to get Bogdan Bogdanovich out of Sacramento. Or on the flip side that Sacramento keeps Boggy, I'd try to get Buddy Hield off of them. They relegated him to the bench this season to give Bogdanovich more playing time so I doubt they'll be interested in paying both of them $20 million+. Malik Beasley averaged 21 PPG on 47/43/75 after being traded to Minnesota and getting starters minutes. Kris Dunn played All-NBA caliber defense this season. De'Anthony Melton played very well off the ball for Memphis this season. Any of these guys would be great complementary players to build around Barrett/Robinson.

Thoughts: Spin zone- the Knicks have enough young players to justify keeping a couple of them over better but older/pricier players.

Thoughts: Basically everybody they signed the last offseason. And DSJ, who might be on his third team in as many years soon.