As discussed on Spittin' Chiclets a few times over the last 4.5 years, I have a penchant for meeting up with the Stanley Cup on occasion. The first time it happened was 16 years ago tonight when I was in Tampa for Game 7 of the Stanley Cup Final between the Lightning and the Calgary Flames. But the way it transpired was one of the more unlikely things that's happened in my life.

Me and a couple of the boys were just down Siesta Key for Memorial Day weekend visiting our buddy and went to a raucous Game 2 in which Tampa tied the series. I had no plans to be back down to Florida anytime soon.

Calgary won Game 5 on the road in OT and gave themselves a chance to win the silver chalice at home on a Saturday night. I was on a bachelor party down Foxwoods and stayed in my hotel room by myself to watch what would be an epic Game 6 (the BP was for my cousn's fiancé so I only knew a couple of the guys). I thought it would be over by 10-10:30 and I'd just meet up with the crew after. Sonk. Instead, the 2-2 game went to double OT and Marty St. Louis sent the series back to the Gulf for Game 7 when he scored his ninth goal of the playoffs.

Many Flames fans are convinced that the Cup was "stolen" from them because Martin Gelinas appeared to score a go-ahead goal off of his foot with just under seven minutes left in Game 6.

But even if the goal counted, you can't just assume that the Flames would go on to win the game. So nobody got robbed because Stanley Cups aren't won with seven minutes left in a game.

Believe me, I would have loved to see it happen because I had a c-note on the Flames to win it all at 90/1. That would've been nine grand in my pocket. When I was in Vegas in February, Calgary wasn't even in a playoff spot but they were starting to get hot and had a good team. So I gladly jumped on the generous odds offered by the Imperial Palace (back when you could still get good odds on The Strip). I also had a small play on Tampa Bay from before the season started---$25 on them at 40/1.

I was already a winner going into Game 7 so I was just hoping for an awesome game that night when I took the train to work in Boston on Monday morning. Around noon I get a call from my buddy in Sarasota.

"I have an extra ticket for tonight. Can you get down here?"

"Umm...give me a few minutes", I replied as I thought up a plan to get from my cubicle in Boston to Game 7 of the Stanley Cup Final in Tampa in 8 hours.

I walked into my supervisor's office hunched over in pain despite the fact I was perfectly healthy.

"You don't look so good, you should probably go home," she said.

Now that I knew I could leave work, I stealthily called JetBlue from work. The next flight from Boston to Tampa was at 3PM and I would return at 8AM on Tuesday. Perfect. A hotel room wasn't a concern. I booked the flight and called my buddy back but got his voicemail. Then I called pops.

"I need you to grab my courier bag, throw a couple things in it and come grab me at work."

"Yup, I'll explain when you get here."

The old man was outside on Dartmouth street within a half-hour.

"We're going to Logan. Evie got me a ticket for Game 7 tonight."

"Only you," pops replied unsurprisingly, used to my Gumpian tendencies.

So I'm at the gate at Logan waiting to board. I contemplate buying one of those throw-away Kodak cameras but eventually decline (this was before cell phone cameras were omnipresent). As I'm in line to board, my boy Evie calls me. "Dude, I was in the doctors office and missed your call. But the guy heard back from someone else so the ticket isn't available." I was already pot-committed at this point.

"Alright, we'll take care of when I get there". I was willing to spend up to a dime for a ticket. It was Game 7 of the Stanley Cup and I was already holding a winning ticket so money wasn't a concern.

I land in Tampa and head right to the arena. My boy found me a ticket for $500 and it was a damn good seat about 15-20 rows behind the goalie. I was in like Flynn. The beers were going down like a Bang Bus passenger and I was pretty drunk by the second period. The game was a tense nail-biter that went down to the wire but the Flames could never find the equalizer and the state of Florida had it's first Stanley Cup champion.

It was the first time I got to see the Cup awarded in person then paraded around the ice. That's awesome stuff and I highly recommend it, even if your team is the one to get beat. After the festivities, me and Evie go across the street for a beer, something I definitely did not need at this point in the night. We were calling our other buddy who is pals with a couple of the Lightning players to see where the party was. But Evie had to drive back to Sarasota and had his kids in the AM so he couldn't tear it up like we used to up at STATE. I continued to keep calling and calling and calling.

This is where the great mystery starts. If, before you die, you can get answers to certain parts of your life or particular nights, this would be one of my top requests. I was fucking shattered and my frequency was kind of in and out. I was standing outside of the arena with just a courier bag. I had left the building. Somehow, and I don't know how, I got back into the building.

I suspect that I told an usher or security person that I was either (borderline blacked-out) media or that I was friends with so-and-so but they weren't answering. Or maybe I just snuck in a door that somebody walked out of. I just don't know. But I do remember walking into this big restaurant/function room packed with people. Suddenly, in walks Tampa captain Dave Andreychuk with the Stanley Cup raised over his head and the room went nuts.

A minute later, I spied the other buddy I had been calling incessantly since the game ended. He was standing there talking with St. Louis and Conn Smythe winner Brad Richards so I strolled over. He happened to be listening to my voicemails as I approached and he just gave me a "how the fuck did you get in here?" look. Not only because I didn't have a pass but I was drunker than Barney Gumble. He introduced me to them and twelve hours after I faked sick in Boston, I was gassing beers and celebrating a Stanley Cup win with the playoff MVP and league MVP in a private room in Tampa. Pretty wild shit.

After the Cup got passed around, it was just sitting there in a chair by itself. So I went over and the first thing I looked for was Bobby Orr's name. I was running my fingers all over the Cup like Helen Keller and had it to myself for a few minutes. But I had no camera and nothing to document this craziness though it really wasn't a concern at the time.

The party wound down or maybe I was asked to leave, I don't know. Regardless, I left the arena for the second time that night at somewhere between 3AM and 4AM, drunk as a skunk. The area around the arena isn't what I'd call shady. But at that hour with not many people around and me being heavily intoxicated, I looked like an easy mark. So I sought shelter. In a satellite news van that was parked just outside the arena.

I planned on just catching a quick nap and also felt safer out of sight in a vehicle. Just as my hand grabbed the door handle, I heard a man shout "STOP THIEF!". I could barely walk but this guy thought I was gonna walk off with some TV equipment to take back to Boston with me. He summoned a nearby police car. The officers asked to see my ID and what I was up to. I told them I flew down from Boston just for the game, didn't have a hotel, and was just seeking safe shelter for a few minutes. I assured them that I wasn't looking to steal a TV camera or anything.

"We'll call you a cab to the airport. But if we see you here again, you're getting arrested."

"Thank you, officers. I assure you, you will not see me again."

And they didn't. I went to the airport and did my impression of Tom Hanks in THE TERMINAL for a few hours. Around 8AM, I called in sick for Tuesday then flew back to Boston. By 2PM, I was back in my bed to get some sleep. The previous 24 hours were an incredible whirlwind. I went from my miserable cube job to crashing a Stanley Cup party and then back home again. Although I had my ticket stub and a few souvenir beer mugs that I somehow managed to hang onto (shoutout courier bag), I had no photographic proof of meeting the Stanley Cup or partying with the Lightning.

A few weeks later, I got an email, clicked on the link, and this popped up: 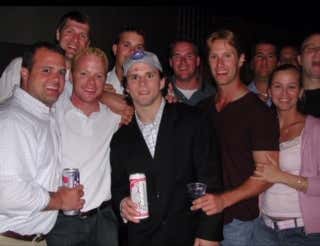 I don't remember being in any pictures that night but clearly I was (far right with mouth agape). And now I had evidence that I indeed crashed the Tampa Bay Lightning's Stanley Cup celebration.

I would repeat a similar feat four years later in Pittsburgh when I wormed my way into the Red Wings Cup-winning locker room at the Igloo (while I had a nice glow on, I wasn't anything close to the state I was in down Tampa). While I partied with the Wings until I got tossed (twice), there was a fellow Masshole down the hall in the losing locker room experiencing a career low. I didn't know him. But just a few years later, I bumped into him at the old North Star bar near the Garden and we formally met. His name? Ryan Whitney.