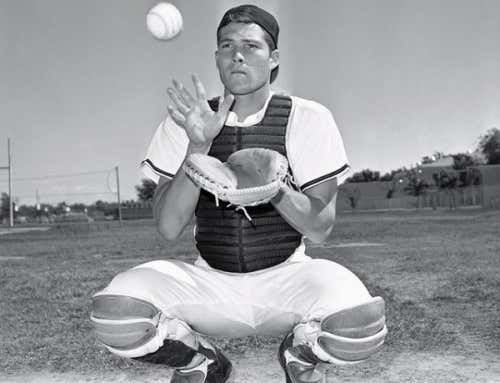 The New York Mets make one of the biggest draft blunders in MLB history. Holding the top pick, the Mets select catcher Steve Chilcott from Lancaster, California. Chilcott never gets above AAA before retiring in 1972. The Mets passed over Reggie Jackson out of Arizona State, who went second in the draft to the Kansas City Athletics. Jackson would become one of baseball’s premier sluggers, and a Hall of Famer.

There was no draft in Major League Baseball until 1965. Players were free to sign with any team that offered a contract. This would prove unfair as teams like the Los Angeles Dodgers, New York Yankees, and St. Louis Cardinals were able to load up their farm systems with talent. A draft finally enabled competitive balance as the teams with the worst records had the top pick allowing them to find players that could turn their fortunes. For the first 40 years of the MLB Draft, the first pick went to the worst team in either the National or American League on a rotating basis.

The first number one pick was Rick Monday, a star at Arizona State who was taken by the Kansas City Athletics. Monday spent 19 seasons in the majors and played in two All-Star Games. Unlike the NBA and the NFL, few number one picks are ready to play right away and need to develop in the minor leagues. Thus the MLB Draft is often a crapshoot with just as many hits as misses.

Steve Chilcott was not the only number one pick that failed to reach the majors. In 1991, Brien Taylor was taken first by the New York Yankees. Considered a can’t miss prospect, Taylor was injured in a bar fight and never made it passed AAA. In 2013 the Houston Astros chose Mark Appel first overall instead of Kris Bryant. Appel had numerous arm issues and retired in 2016, never rising above AA.

Of the 55 players chosen first overall, just three have been inducted in the Baseball Hall of Fame, Harold Baines, who was selected with the first pick by the Chicago White Sox in 1977. The Seattle Mariners chose Ken Griffey Jr. in 1987, and Chipper Jones picked first by the Atlanta Braves in 1990. It is quite possible that Alex Rodriguez, who was taken by the Mariners in 1993 and Joe Mauer picked by the Minnesota Twins in 2001, could one day be Hall of Famers.

Danny Goodwin could be the most unique top draft pick, as he was chosen first overall twice. In 1971 he was picked by the Chicago White Sox but did not sign and played at Southern University. He was selected first overall again in 1975 by the California Angels but never made good on the promise, playing just six seasons in the majors.