Other than sports and skirts, I had very little interest in being in high school. By senior year I needed credits to graduate and my guidance counselor got me into some easy-peasy classes, like Film. If basket weaving had been an elective he would've put me in there. I graduated high school in 1974,  just barely.

I got accepted to Norwich University, in Northfield, Vermont, the oldest private military school in the United States. The first part of the first day consisted of speeches focused on parental concerns. Everything was relaxed and positive, but after the parents were gone, the training immediately began.

My shoulder-length hair was buzz cut, like everyone else's, and we were all given small yellow handbooks to read as we stood in long lines getting uniforms and bedding that we stuffed into oversized duffle bags we'd later use to carry laundry. The handbook contained information about the history of the University, the Honor Code, rules, and the order of rank and file, which I knew very little about. As we shuffled from place to place, the Cadre (upperclassman with rank), pulled us out of line and asked us questions. A wrong answer resulted in ten pushups. Every "Rook" (as incoming freshman were called) did well over 100 pushups the first day and every day thereafter for the first couple of weeks, until we got it right.

The first seven days were called "Rook Week" and there were no academic classes, just intense military training. We woke up each morning at 4:00 and after meeting in the hallway outside our rooms and receiving orders, we changed into our PT (physical training) uniforms (fatigues with bloused boots) and took our positions in formation just outside the building, which for me was Patterson Hall. I was with E Company and "Echo" was our call. Once our Master Sergeant arrived at formation we immediately went from "Parade Rest" to "Atten-hut". He wasn't a large guy, but he was fiery and he sure could call out marching and running cadence, which I was a big fan of.

We'd begin by marching towards the woods and once we hit the paths he'd have us going double time. When we were deep enough into the woods and running at a good clip, he'd slow us down to a march and do my favorite call:

I don't know but I've been told

He had the voice of a choir boy but the temperament of a gamecock. You didn't want to cross him, at least not in the first few weeks...

I survived the first month and began to feel comfortable in the military environment. I could identify Corporals, Sergeants, Master Sergeants, Lieutenants, Captains, and Majors and I knew how to march and when to salute. There was always some downtime between classes and dinner, and as Rooks, we were allowed to do additional PT, and for the guys in my company, that meant putting on our gray sweats and taking a run through the woods. After a while, we realized we weren't being watched and that maybe we could get away with more than we thought...

We'd put on our sweats and stuff a couple of joints inside our socks, run a mile or so into the woods and then stop and catch a quick buzz. We did it for weeks without a problem. Then one day we were a mile in and had one lit, when two upperclassmen approached. We immediately went into "Attention" arms at our sides, looking straight ahead. We figured we were all done. Our parents would be getting called to come pick us up and our family names would be disgraced forever. The two guys circled us and asked us if we'd been smoking grass. We didn't answer. One of them told us he could do a search and if he found grass we'd be expelled immediately. Just when he had us at his mercy, he laughed and said "I'm just a Staff Sergeant and I couldn't care less about what you do". Then he took out a joint of his own and we all had a good laugh.

He went on to say that he was a disk jockey at Norwich radio, WNUB 88.3 FM, and that the station needed another disk jockey if anyone was interested. I immediately spoke up and he told me where the radio station was and to meet him there at 7:30 on Saturday morning. On weekends upperclassman either went home, visited their girlfriends, or went off-campus. They didn't hang around and it was tough to fill the 8:00 - 4:00 time slot on Saturdays. 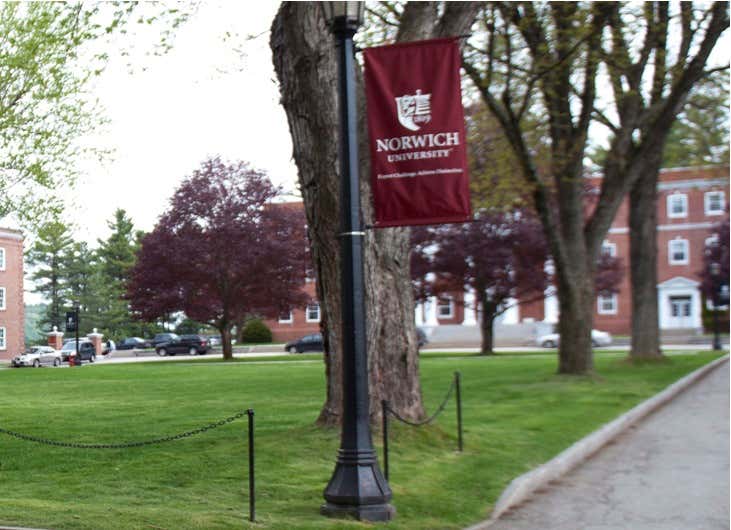 The station was in Jackman Hall, which was a prestigious, three-story, red brick building with a turret clock and a bell tower just above the third-floor terrace, and located at the front of the Upper Parade Ground where it became the focal point of the University. I walked up some stone stairs, past the six sculpted columns supporting the terrace above, and through the double doors in the center of the building. Once inside, I walked up to the third floor. The sign on one of the doors said "WNUB" and so I walked in.

My guy was there and after showing me around he taught me how to cue a record on one of the turntables. With the headphones on, you carefully dropped the needle and then spun the vinyl backward just beyond any sound. That way when you played it there was no drag and the music seemed to start immediately. There were two turntables and while one was playing you cued in the next record on the other. I didn't expect to start immediately, but he told me I picked it up quickly and I was set to go. He wished me good luck and left me alone in the studio.

I did the 8:00 - 4:00 show every Saturday, with news, and a segment where I interviewed student-athletes.  I added a couple of evening shows during the week. The signal only carried as far as Vermont College (girls school), but everyone on the Norwich and VC campuses tuned in.

I called my show "Vinnie's Rock Opera" after a rock opera I had seen many times at a small club in Stoughton, Massachusetts called GiGi's, just after graduation and before leaving for Norwich. The band's founder was an innovative guy, talented musician, and front-man named George Leonard who was known professionally as Georgie Porgie. At the time his band was called Georgie Porgie and the Bozo Band. He did a well-scripted theatrical act with costumes, lights, a smoke show, and incredibly unique, original music. I partied with band members in their van before shows and during intermissions and I got to know a little about George. He went to Attleboro High School and when the high school principal tried to make him cut his long hair in 1964, he took his battle for freedom of expression all the way to the Supreme Court.  In December of 1965,  George finally won the suit in what had been a precedent-setting case in student rights and freedom of expression, which were guaranteed by the Constitution.

My radio show in Vermont was doing well and I was having a hell of a time. I began thinking that maybe a career in the military wasn't for me, that I would be better off at a major University where I could do big radio. My first semester grades were excellent, top 3% of my class. I applied to Boston University and was accepted. I transferred and started the second semester at BU in January of 1975. My first stop, BU radio. I introduced myself to the station's manager and told him how I'd been a disk jockey at WNUB while at Norwich University in Vermont. That I could cue records, do the news, and interview student-athletes. None of it seemed to impress him. He asked me if I heard of Howard Stern and I had. He went on to say there were no openings and that Howard Stern was the biggest thing in Boston radio and he was dominating the airwaves with incredible shows every day. He asked me what year I was in, and when I told him I was a freshman, he said that I'd probably be able to get a show during my second year of grad school…

Although I believe shock-jock Howard Stern single-handedly ended my radio career with his huge success, I must admit that for quite a while I was a big fan, but I've never totally forgiven him. To think, I could've been Fartman… 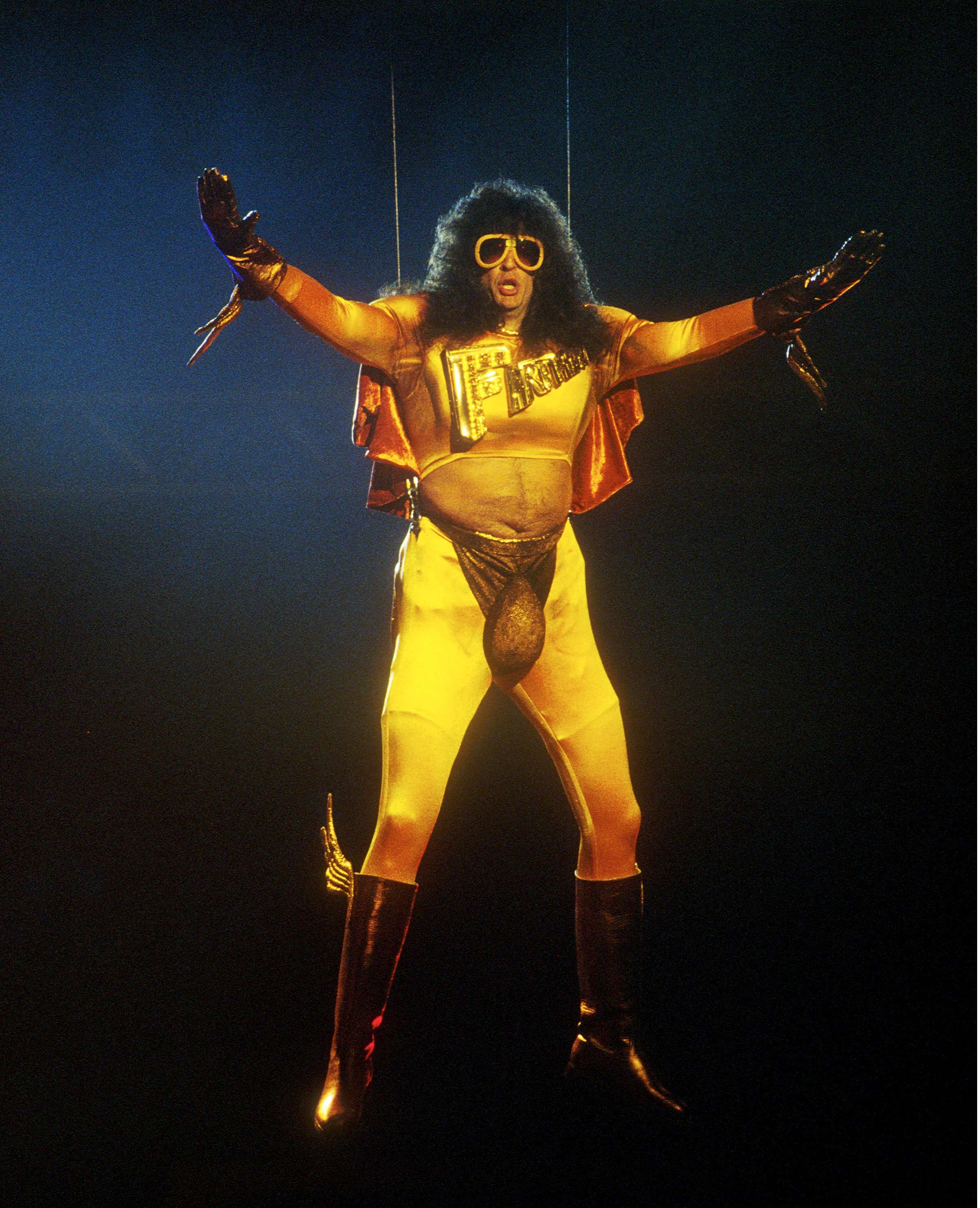 It wasn't until February of  2020, 45 years later, that I would make my return to radio when I was introduced on Barstool Radio by my new boss, Dave Portnoy. My recent appearance on the podcast The Dog Walk with @EddieBarstool was a welcome return to the airways as well. Thank you Eddie, we'll have to do it again…

For me, this isn't kickoff. This is the middle of the 4th quarter. So to get an opportunity to come back and win it is incredible.