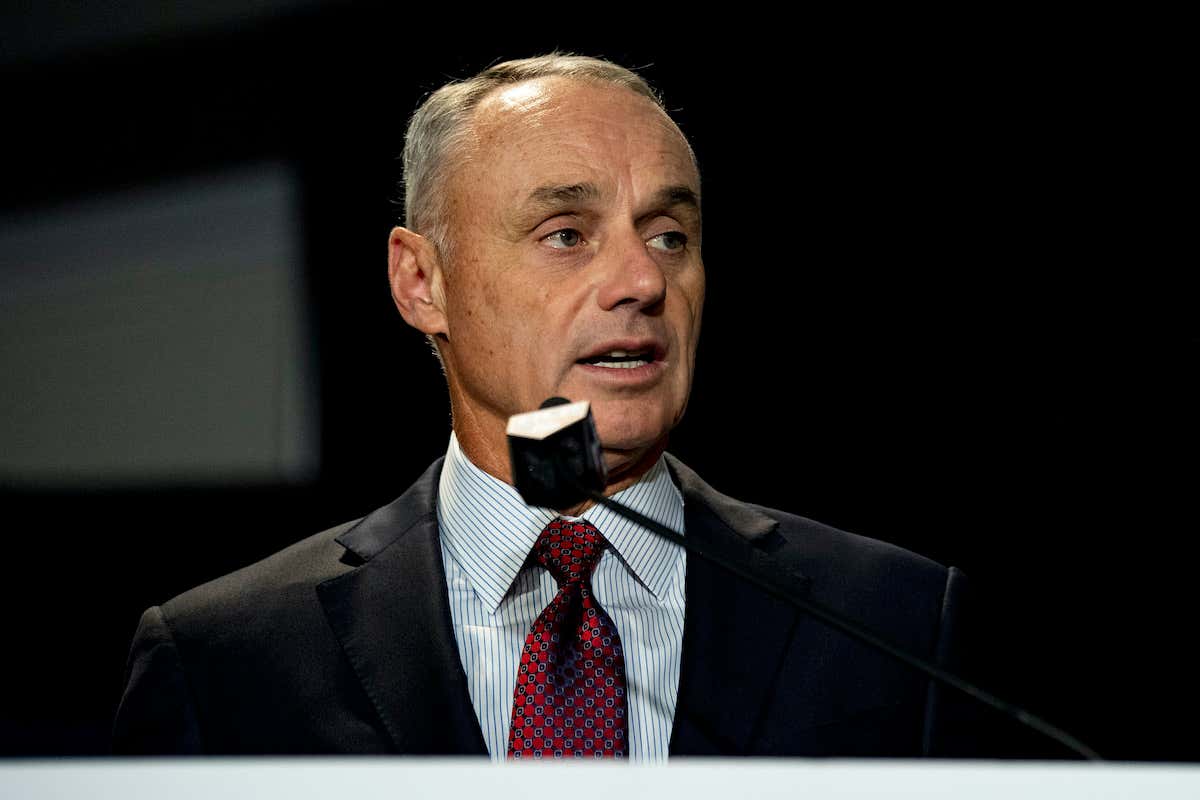 You're probably just as sick of reading about this shit as I am writing and podcasting about it, but Jeff Passan had a report today that MLB owners are angling for a 48-game season. NOPE.

"The owners are not going to agree to more losses," said one person familiar with their thinking, and that's the sort of thing owners say in the middle of a negotiation. They have grown used to winning, and their position, as of now, at least, is as rigid as the players': They're happy to play 48 games.

The players believe they're bluffing -- that the specter of a forced season, of further labor discord going into 2021, of this sport so broken it couldn't figure out how to split up billions of dollars during a pandemic, will bring the league back to the table. If MLB calls the union's bluff, players will make a total of $1,205,856,000. They could take a 40% pay cut on their full pro rata at 82 games and still make more than they would over those 48. Here stands the union nevertheless.

Forty-eight games is pointless. I'm not angling that 162 games is completely necessary, but you cannot rightfully determine team success from a baseball standpoint over a 48-game season. That's a joke.

Here's how I see it. Everybody's losing money no matter what. No player was ever going to make their full salary, and no owner was going to make a profit this season. It is what it is. Passan's report says that owners stand to lose $460.8 million if they play 48 games and $787.2 million for an 82-game season. The owners are willing to pay players their full prorated salaries over the 48 games and the players want to get paid full prorated salaries over 82 games.

Now, as much as it seems like the Coronavirus is becoming a thing of the past, it's still being treated as a thing of the present. That means that games will be played with no fans, which also means no ticket revenue, and no ballpark revenue as in concessions, parking, etc. and that takes a big chunk out of a team's overall revenue. Close to 40%, Passan reports. He also writes that the fear of a second wave of the virus later this year stands to eliminate the possibility of there being a postseason at all, which would cost teams and the league even more substantial dollars.

If the owners think that players are just going to bend the knee and accept a 48-game season, they're sadly mistaken. Passan illustrates how an 82-game season will still be what players hold out for.

Accordingly, between the time it might take to settle on a deal and the September cutoff, an 82-game season might be the most players can hope for. Seeing as they would settle for a full pro rata at 1,230 total games, the projected losses from owners based on the $640,000-per-game figure is crucial for this exercise: $787,200,000. Compared to the projected losses owners would face in the 48-game season they're ready to rubber-stamp, playing an 82-game season would cost $326,400,000 more.

And there you have it. Distilled to the simplest form, Major League Baseball is in crisis because of a $326 million problem.

The owners will say: That is another $326,400,000 on top of the $3.5 billion we are already set to lose. And though there is no publicly available documentation to substantiate those claims, the lack of gate revenues alone is a significant enough blow that some sympathetic to the union acknowledge the league's finances have been hampered.

I've written this before, but it's worth repeating here -- I've spoken to players, I've spoken to executives close to owners, and I've spoken to agents who are in contact with both sides. Nobody is saying the same thing. And that's to be expected when you have two sides that both think that they're right. The owners are crying poor and the players are fighting for the money that they signed a contract to play for. Because of previous negotiations in the past, it's important to note that there was bad blood between these two sides before the pandemic even broke out. That's why I genuinely fear for baseball being played in 2020. No side is willing to cave to the other and that's bad for us fans.

There's also this -- Rob Manfred still has the power to push a button and force a season regardless of the negotiations. Manfred can say, fuck it. We're playing a 48-game season. Too bad. Well, then the players can counter and say fuck you, we're not showing up. That would most certainly happen, if a season was forced. Okay, so then what about the minor leaguers that are left holding their dicks because there will be no minor league season regardless? If you're a minor leaguer who makes three grand a year, are you turning down the chance to make something like a hundred grand to come play big league baseball and get you some MLB service time? Maybe not all of them will, but you'd have to imagine that some of them will be tempted to seize that opportunity.

You'd have to think that some if not most of these owners only care about some form of baseball being played so that they can get their TV money, recoup some of their losses and call it a season. The players that would be sitting out under this scenario are the reason why fans would be watching in the first place. But there is a scenario in which Manfred could force a season and fill roster spots with minor league players who were recently having thoughts that either their life in baseball was over, or were in the process of figuring out how to make ends meet because they went from having a shitty income as a minor leaguer to no income at all. Now you're getting 20x your yearly earnings dangled in your face to become a big leaguer, regardless of the circumstances.

When looking at the owners saying 48 games and the players saying 82 games, a standard negotiation would tell you that they'll eventually meet in the middle and play somewhere around 65 games. I've got players saying that they wouldn't do that, either. When both sides are saying here's my stance and I'm not budging from it, what you've got is a recipe for disaster. That disaster being no baseball season. And the loss from that goes beyond dollars. You've now become an embarrassment, as the NBA and NHL are already on the verge of returning with the NFL set to start on time. You've pissed off the fans to an extent that remains to be seen, but these are the people who make the game as a business possible. The money that you're fighting over comes from them. If they stop caring, then there's no money to fight over anymore.

Like I said yesterday, you've got Joel Sherman tweeting on Wednesday that there's never been more pessimism about an agreement getting reached and then Jon Heyman tweeting on Thursday that there's tons of optimism. I find it hard to believe that any reporter has a stronger grasp on the situation than the owners and players themselves. And if you're paying attention to both sides, then you can come to the conclusion that things are not going well. Things are not trending in a positive direction. And I was all on board when players were expressing their concerns over their personal health and the health of their loved ones. But when it becomes about money, that debate falls on deaf ears, especially as tens of millions of Americans are out of jobs.

That being said, I'm still on the side of wanting the players to be fairly compensated. They deserve that more than the owners deserve being able to avoid taking a hit, as they profit annually when things are going well. Things aren't going well right now, and that, to me, is one of the risks of owning a major league club. Regardless, I am losing hope that there will be baseball in 2020. I have no skin in this negotiation. I'm not an owner nor am I a player. I'm a fan. And as a fan of the game of baseball, I'm incredibly disappointed that we're in this position. Figure it out.