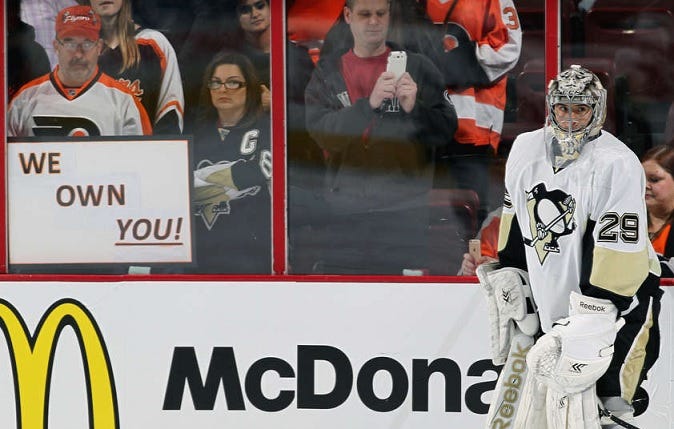 Well that makes 8 straight games for the boys. Like I said last week, I know that the Flyers suck. I know that they’re not in the playoffs and that there’s a very good chance that the Penguins will be able to hold on to that Wild Card spot they’re in right now. But I don’t give a damn. And it’s almost better that the Flyers didn’t make the playoffs anyway. 1) Because I’m still holding out hope they get a top 2 pick. And 2) Because at the absolute soonest, the Flyers won’t be able to lose another game to the Penguins until October 7th. So that’s at least another 180 days to tack on to that 535 by default. Eat shit, Pitt. Now let’s get a quick breakdown of the game.

Steve Mason Is Too Good And It’s Not Fair

I just don’t know what else to say about Steve Mason that hasn’t been said already. He’s a leader in the locker room, a competitor on the ice, and deserves to at least be mentioned in the Vezina discussion (obviously Price wins the award, but at least mention Mase). It’s such a damn shame that the Flyers decided to play like a heaping pile of shit for large portions of the season because they wasted a stellar year from Mason. But I think the Flyers finally have found their guy in between the pipes. It’s been forever since Flyers fans could be comfortable with a netminder, but I finally think the team can go out and try to find the surrounding pieces of the puzzle now.

The Penguins might be the most undisciplined team in the NHL. It was so much fun just watching the unravel right in front of our eyes. If they manage to hang on long enough to still make they playoffs, they are going to be hilarious to watch in the first round. Crosby tears. Been drinking that stuff for years. I heard they recently decided to add more hops to it.

Michael Del Zotto With The Dagger

If Michael Del Zotto scores, I blog it. So here it is. Dagger City. 535 days, bitch. The Peeps and Tastykakes were flowing for everybody on a glorious Easter Sunday.

– Ryan White’s goal was beautiful. The entire shift was beautiful actually. A shit ton of hustle from Raffl gets the whole thing going. Then an unbelievable feed from Coots and a hell of a bury from White. Probably a top 5 sequence this Flyers season.

– Chris Kunitz can go screw. I have absolutely no idea how Voracek ends up with that 10-minute major and Kunitz doesn’t even get anything for an unsportsmanlike. The whole Penguins team can screw, actually. Bunch of plugs.

– It would be nice if next season, the Flyers could try to play everyone as tough as they play the Penguins. Just a thought.

– Flyers have 3 more games left. I would really appreciate if they could lose all of them. We’ve got a draft to focus on here, and I’d love to send the Hamburglar and the Senators into the playoffs on a win.