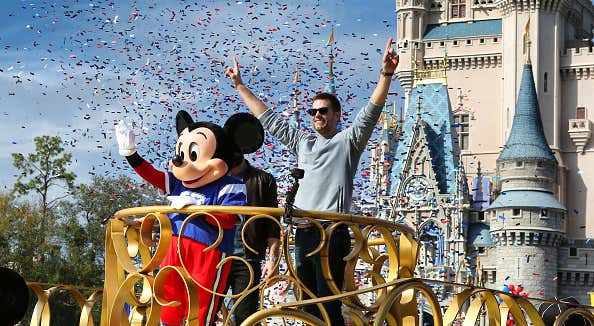 Deadline -  Tom Brady, whose Last Dance-esque docu series is due on ESPN in 2021, made an appearance in Disney’s pitch to advertisers as the company sought to underscore its sports potency despite COVID-19.

Brady appeared for a two-minute segment at the very end of the video, which was bookended by a riff on Zoom calls featuring Anthony Anderson of Black-ish and other cast members from the show and its spinoffs. After Deon Cole of Grown-ish deadpans, “I’m going to be upfront: I lied on my resume,” Brady replies, “Resume? I never had one of those. Then again, I only have really had one job at this point.”

Anderson marvels, “Is that Tom Brady on our call?” The quarterback shrugs, “Now that I’m part of the Disney family, I can basically pop into any meeting I want.” When Anderson tries to pitch him ad ideas for his upcoming show, Brady logs off, saying, “See you, guys — I’m off to the Mandalorian meeting.”

Looks like Tom Brady is the captain now, Disney.

It's funny how that worked out. Brady produces his own docuseries on Facebook. A Michael Jordan doc sets ratings records in a sport-deprived world. And like *that*, the GOAT goes from years of bashed on ESPN as an arrogant, cheating, clubhouse attendant-bribing, lying, conniving, evidence-destroying, pampered, referee-protected, MAGA-hatted, cliff-dwelling, noodle-armed system quarterback inferior to so many other, better, rules-obeying quarterbacks to becoming the new face of their parent company. It didn't take long for the Mouse to come crawling on his gloved, three-fingered hands and red shorts-clad knees begging for Brady to charm their advertisers.

The biggest media conglomerate since Gutenberg invented the printing press has done a total 180 on a guy one of their subsidiaries has been vilifying for years. And the reason they have, is because they know they need Tom Brady more than he needs them. He'll be bigger for them than "Star Wars" and Marvel put together.

Hell, they'll probably tear down one of their theme parks and replace it with Bradyland. With attractions like Splash Play Mountain, Mr. Tom's Pliable Ride, The Hall of Slot Receivers, Buccaneers of the Carribean, the Tom Coughlin Tower of Terror and a food court serving $12 Kale Smoothies.

If I was the GOAT, and it's by the grace of God I am not, I would've agreed to do this only if every executive at ESPN got down on their lousy, filthy knees and begged me for forgiveness live on the air while every comment ever made by Max Kellerman about how terrible I am played on a constant loop. Instead, he chose the dreaded high road once again. I can only hope he's about to take all their money for their insolence. Or really did let him in on "The Mandalorian" meeting. But in the end, he has truly won.