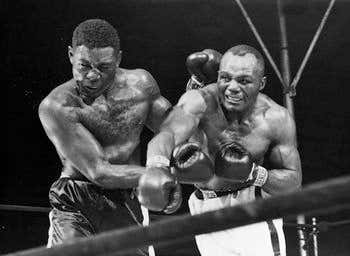 Jersey Joe Walcott takes on Ezzard Charles for the fourth and final time in Philadelphia. The heavyweight title fight is won by Walcott in a 15 round unanimous decision. All four bouts were title fights, with Charles winning the first two bouts and Jersey Joe taking the final two matches. Jersey Joe Walcott would hold for an additional four months before losing to Rocky Marciano.

Born Arnold Raymond Cream, Jersey Joe Walcott was born in Pennsauken, New Jersey, on January 31, 1914. The son of a West Indie immigrant, he took the name Joe Walcott after a boxer from Barbados that he idolized. To distinguish himself, he added the nickname “Jersey Joe.” Walcott dropped out of school at the age of 15 to work at the Campbell’s Soup plant. In his spare time, he trained as a boxer, turning professional at the age of 16.

Ezzard Charles was born in Lawrenceville, Georgia, on July 7, 1921. Raised in Cincinnati, Charles learned to fight while serving in the military. Charles fought and won Gold Glove tournaments, but had to put his career on hold once World War II began. Starting his career as a light heavyweight, collecting several notable wins. He later beat several notable heavyweight contenders and was in a position to fight for the championship when Joe Louis retired in 1949.

Jersey Joe Walcott had a long wait before getting his chance to fight for the heavyweight title. Fighting since he was 16, it would take 17 years to earn a title fight against Joe Louis in 1947. Walcott gave the longtime champion the fight of his life, losing a split decision at Madison Square Garden on December 5, 1947. The two fought again six months later with Joe Louis winning with an 11th round with a knockout at Yankee Stadium.

With Joe Louis retiring, the heavyweight title was vacated, setting up a bout between Jersey Joe Walcott and Ezzard Charles on June 22, 1949, at Comiskey Park in Chicago. The two fought a defensive fight, with each not showing much aggression. The fight would go the full 15 rounds, with Ezzard Charles claiming the NBA Heavyweight Championship with a unanimous decision.

Over the next two years, Ezzard Charles defended his title six times. Including a win over Joe Louis in a unanimous decision on September 27, 1950, at Yankee Stadium. On March 7, 1951, Charles and Walcott had a second heavyweight title showdown this time at Olympia Stadium in Detroit. Once again, Ezzard Charles won in a 15-round unanimous decision.

Despite few fireworks, a second rematch was scheduled four months late at Forbes Field in Pittsburgh on July 18, 1951. Jersey Joe Walcott heavy underdog, having lost two unanimous decisions in a pair of unspectacular fights against Ezzard Charles. In the seventh round, Walcott delivered a thunderous left hook that knocked Charles to the canvas for a seventh-round knockout. At the age of 37, Jersey Joe Walcott became the oldest heavyweight champion.

Jersey Joe Walcott’s first title defense came June 5, 1952, against Ezzard Charles. This fight would take place in Walcott’s backyard at the Philadelphia Municipal Stadium. The fight saw Walcott spending much of the night on defense, but the judges felt that Charles did not do enough to earn the win, as the match went 15 rounds, with Jersey Joe claiming a unanimous decision.

Jersey Joe Walcott’s title reign ended four months later when he was knocked out by Rocky Marciano in Philadelphia after the losing the rematch in 1952; he retired with a record of 51-18-2. Jersey Joe Walcott remained involved in boxing, serving a referee in the infamous rematch between Sonny Liston and Muhammad Ali and later serving as chairman of the New Jersey State Athletic Commission.

Ezzards Charles would also go up against Rocky Marciano, coming close to earning back the heavyweight title but losing bot fights. He retired in 1959 with a record of 95-25-1. The many fights that Charles fought would cause serious physical damage. In 1968 he was diagnosed with ALS and eventually died in 1975 after spending his final years in a nursing home.