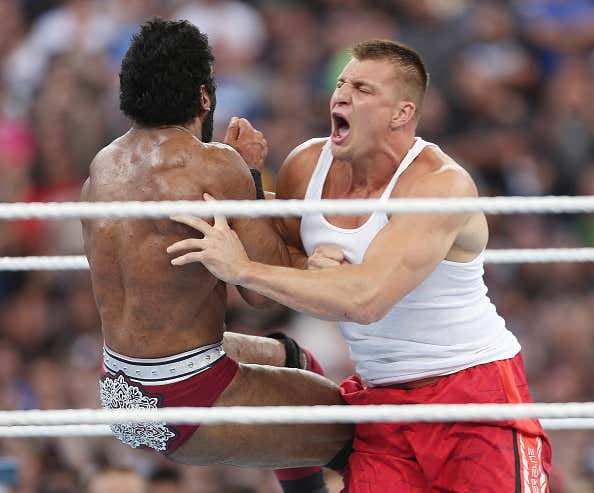 Forbes - WWE has already parted ways with a star who was supposed to be one of the company’s biggest signings ever.

Just a few months after WWE signed NFL tight end Rob Gronkowski as a special attraction, he has left the company altogether after ending his retirement from professional football to return to the NFL. ...

According to the Wrestling Observer’s Dave Meltzer (h/t Wrestling Inc), WWE had planned on using Gronkowski for a trio of major shows this year, one of which was WrestleMania 36. ...

According to Fightful Select (h/t WrestlingNews.co), Gronkowski wasn’t exactly well-liked backstage following an incident at WrestleMania in which he was hesitant about doing a dive spot:

“It was noted [by Fightful Select] that those in the company that they spoke with ‘even those with a reputation of being easy, helpful, and good to work with, all had negative things to say about working with Gronk after his WrestleMania fiasco.’ Per the report, there was heat on Gronkowski after his hesitation to do his scheduled spot that put the WrestleMania filming two hours behind schedule. It was mentioned that one top name called Gronk ‘a...clown who we are so much better off without’.”

Ouch. This is a tough beat down to have to take. Those pro wrestlers are experts when it comes to pulling their punches in the squared circle. But in the real world, they know how to throw the verbal haymakers.

Part of you has to wonder if Gronk had caught onto the fact that the WWE wasn’t working out for him, his co-workers weren’t into him and that’s why he went back to football. I take a backseat to know man when it comes to being a fan of his. And even I wondered how long his shelflife would be when he wasn’t tearing up football fields. I mean, he’s always had a certain charm. But part of it was based on watching him reduce NFL defenses to rubble every Sunday. Take that away, and with all due respect, no one would mistake him for Robin Williams.

Right or wrong, I’ve always had the impression that the WWE what is a fun place to work and that for the most part people get along. So it’s got to be tough to hear yourself be ripped behind your back for being unprofessional. Especially coming from an organization that has employed people like The Bushwhackers. Not to mention actual clowns, like Doink and Dink.

So I’m happy for Gronk that he got out while the getting was good. I guess we can skip the speculation he’s going back to putting on the tights once his football career ends again.