Drew Brees is in a mess of his own creation. A rhetorical Time Out Chair that he himself built, from cutting down the tree to splitting the wood to screwing it together to sanding, staining and varnishing. And therefore it's hard to work up a ton of sympathy for a grown man in his 40s who can be this tone deaf, no matter how patriotic you are and how sacred our national symbols are to you.

The thing that makes it hard to forgive goes beyond it being the last thing anyone needed to hear right now, is that this was not a pop quiz. He had to know this one was scheduled. It was on the syllabus. And Brees not only had time to prepare, he had all the correct answers. Tom Brady got a 100 on this very same test in June of 2018.

When you can sit down with America's arbiter of all moral questions and celebrity interviews Oprah, look her in the eye and have a frank discussion about a polarizing topic, you've created a template for everyone. Especially other record breaking quarterbacks who are twice the age of some of their teammates. Brady was asked about how the Anthem protests were going over in the Pats locker room.

"There were a lot of good, healthy conversations coming out of it," he answered. "The great part about sports are the relationships. I've been in it for a long time. I've been with guys from all parts of the country. Every color, race, belief. You respect what other people ... I mean, I do. I respect why people are doing what they're doing. They're doing it for different reasons. And that's OK.

"We had meetings after practice talking about how we wanted to deal with that particular situation of taking a knee. We chose to lock arms and put our arms around each other.

“We support what people are going through," he continued. "I’ve been playing sports long enough [to know] everyone comes from something different and I think showing respect for everybody, in a locker room, with a team of guys trying to go in the same direction — you better have that empathy for everybody. That’s what sports are about.”

Here's the results of those meetings and that brand of leadership, in picture form. 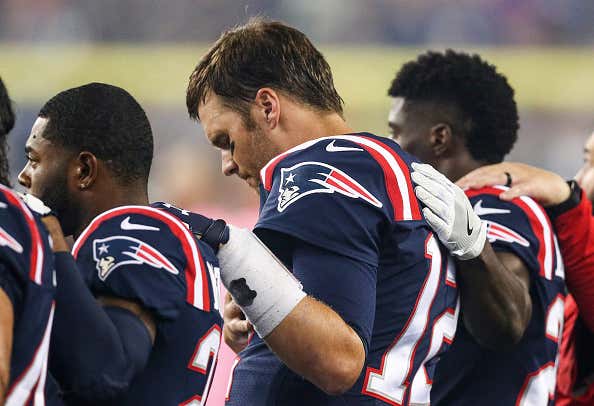 Bear in mind this is the same Tom Brady who took years of crap for one time having a MAGA hat in his locker. Whose head coach and team owner are also friends with his golf buddy in the White House. And who has spent 20 years sharing a locker room with as diverse a collection of souls as you can possibly imagine. From outspoken social activists like Chris Long and Martellus Bennett, pro-fundamentalist Christians like Tim Tebow, apolitical party animals like Gronk, politically engaged citizen-lobbyists like the McCourty twins, guys from Germany (Sebastian Vollmer) to St. Vincent and the Grenadines (N'Keal Harry) to Samoa and everywhere in between. And not only got along, was able to reach a level of understanding with all of them.

There, Brees. That wasn't so hard, was it? Hopefully every player in the league not only learns from Brees' mistake, they look to 2018 Brady to learn how to do life right.