I think this goes without saying, but the only thing I like more than going out with women is looking at maps. Even as a young boy, I was tearing through the sticky pages of my atlas while my peers mindlessly played Madden and looked at BSnude on their PSPs. So the other day, when I stumbled upon something that combines both of my top interests, I was like a kid on Christmas morning. 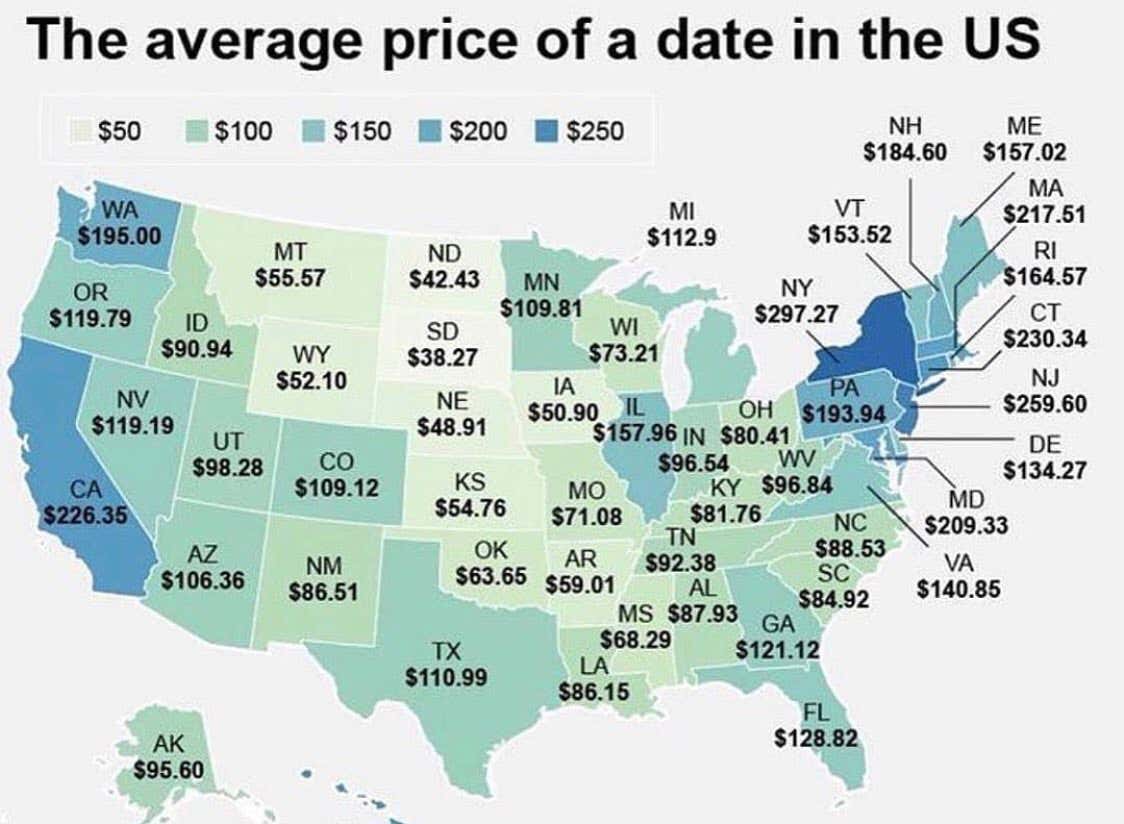 Ignoring the fact that this map is demonstrably inaccurate, the most jarring part of it was the $38.27 cost of an average date in South Dakota. As someone who's taken Ubers pools from Chelsea to Soho that cost more than that, I was especially curious about what the fuck was going on in South Dakota to warrant such a low price. So I decided to hop on Google Maps and try to get a feel for what a $38 date would be like in one of the most average sounding towns in the state: Mitchell. 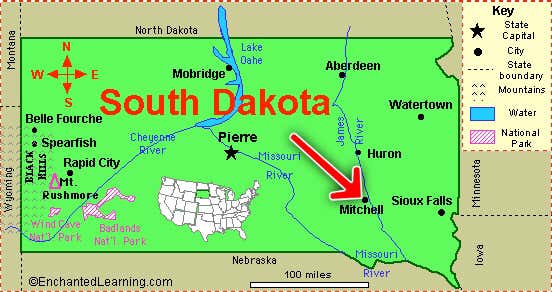 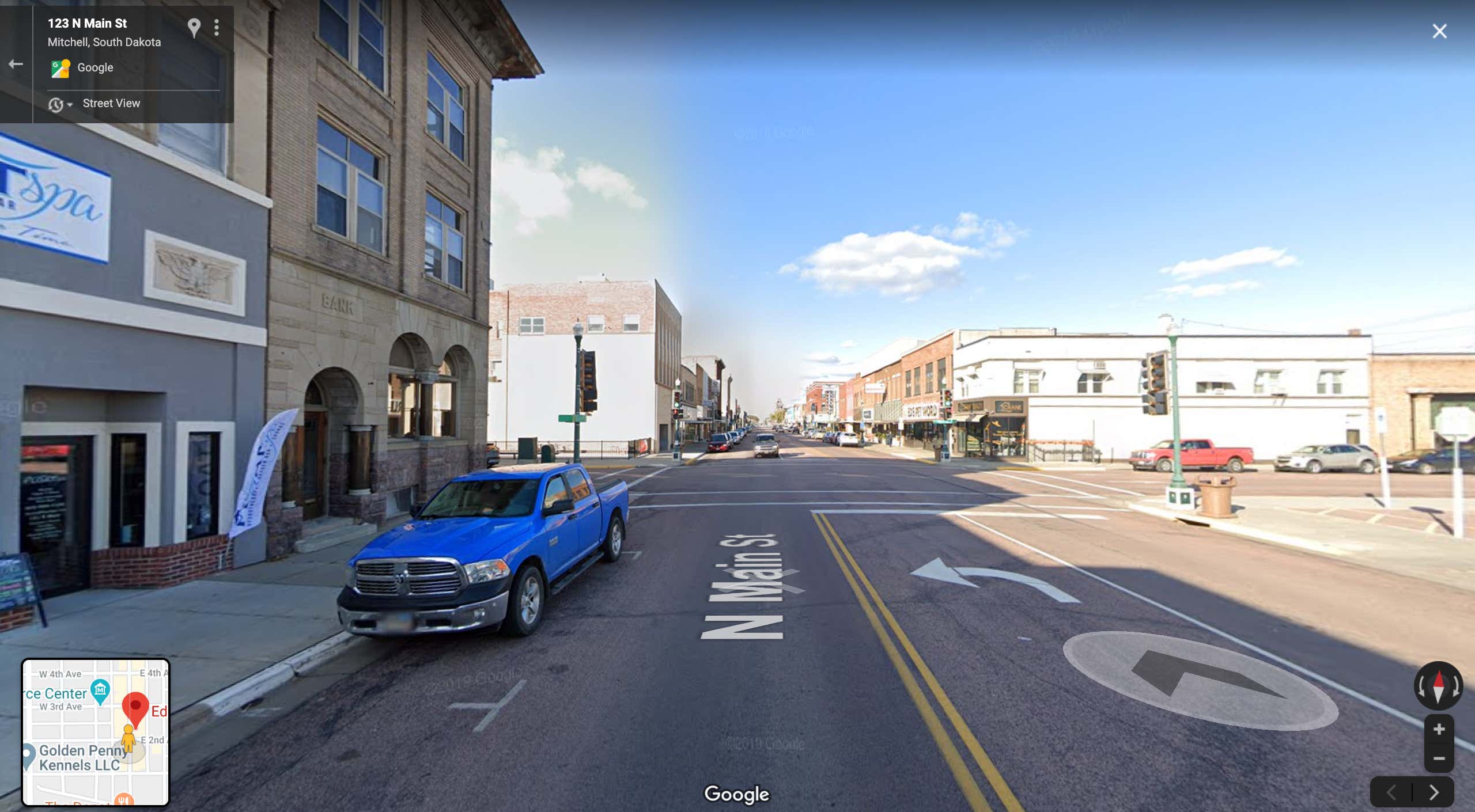 You arrive in Downtown Mitchell with your date. You're giddy. She looks almost as beautiful as she did in her 6th Tinder photo. You quip that “Downtown Mitchell sounds like the nickname of the star player on a frat's intramural basketball team." She erupts in laughter. Not skipping a beat, you gesture toward the Dodge Ram 1500 and say, "that's almost as blue as your eyes." She softly moans. 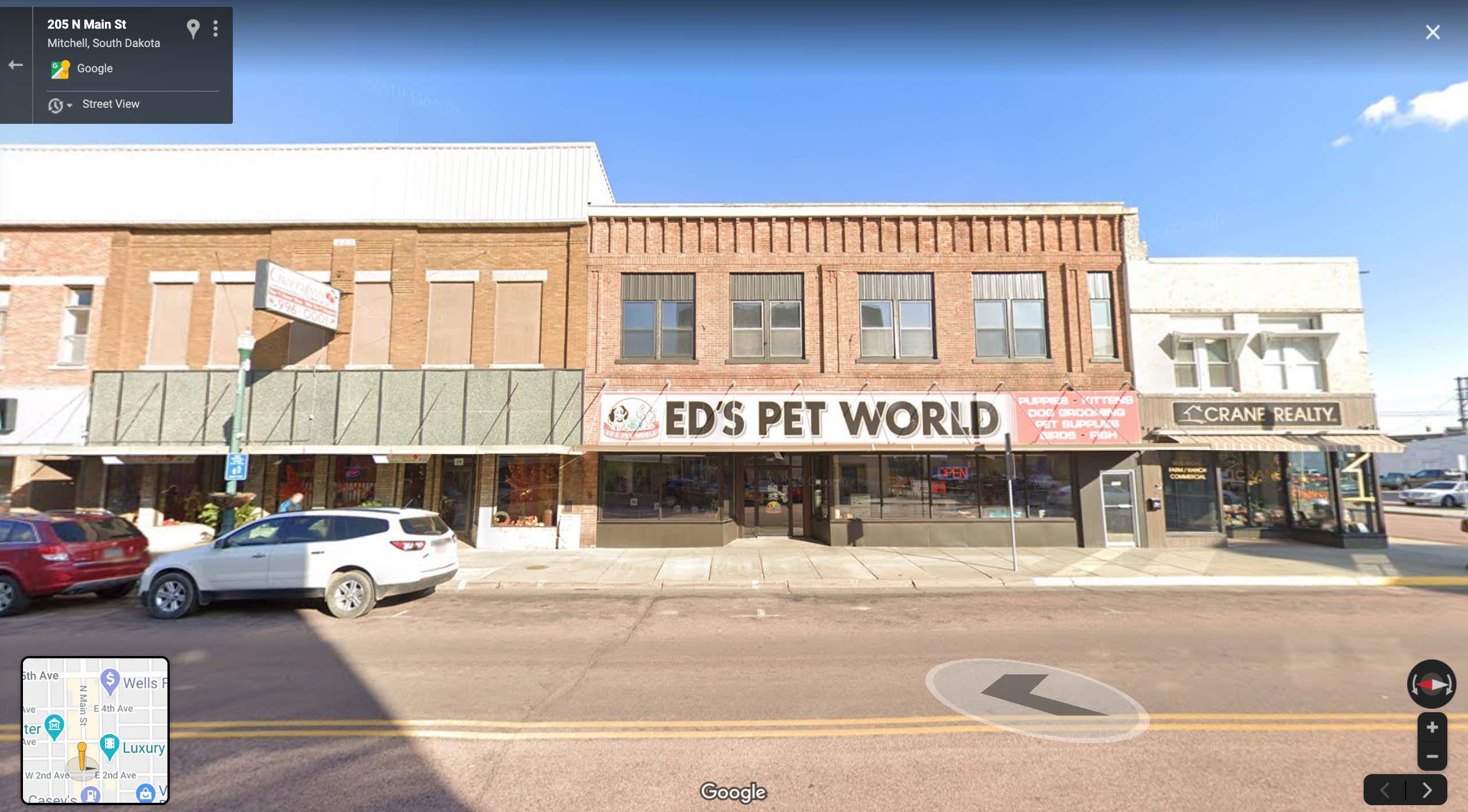 A logical first stop for your first date. She likes dogs more than humans and you'd hypothetically be the one playing with the puppy at a party. A fleshy, androgynous-looking woman covered in dust and fur greets you at the door with a signature South Dakota smile. "You must be Ed," involuntarily escapes your lips. Your date entertains your misogyny and the two of you share a snicker before pretending to drool over decrepit Border Collies for 15 minutes. “All these dogs sure are making me hungry,” you remark. “So let’s fucking eat,” she grunts. 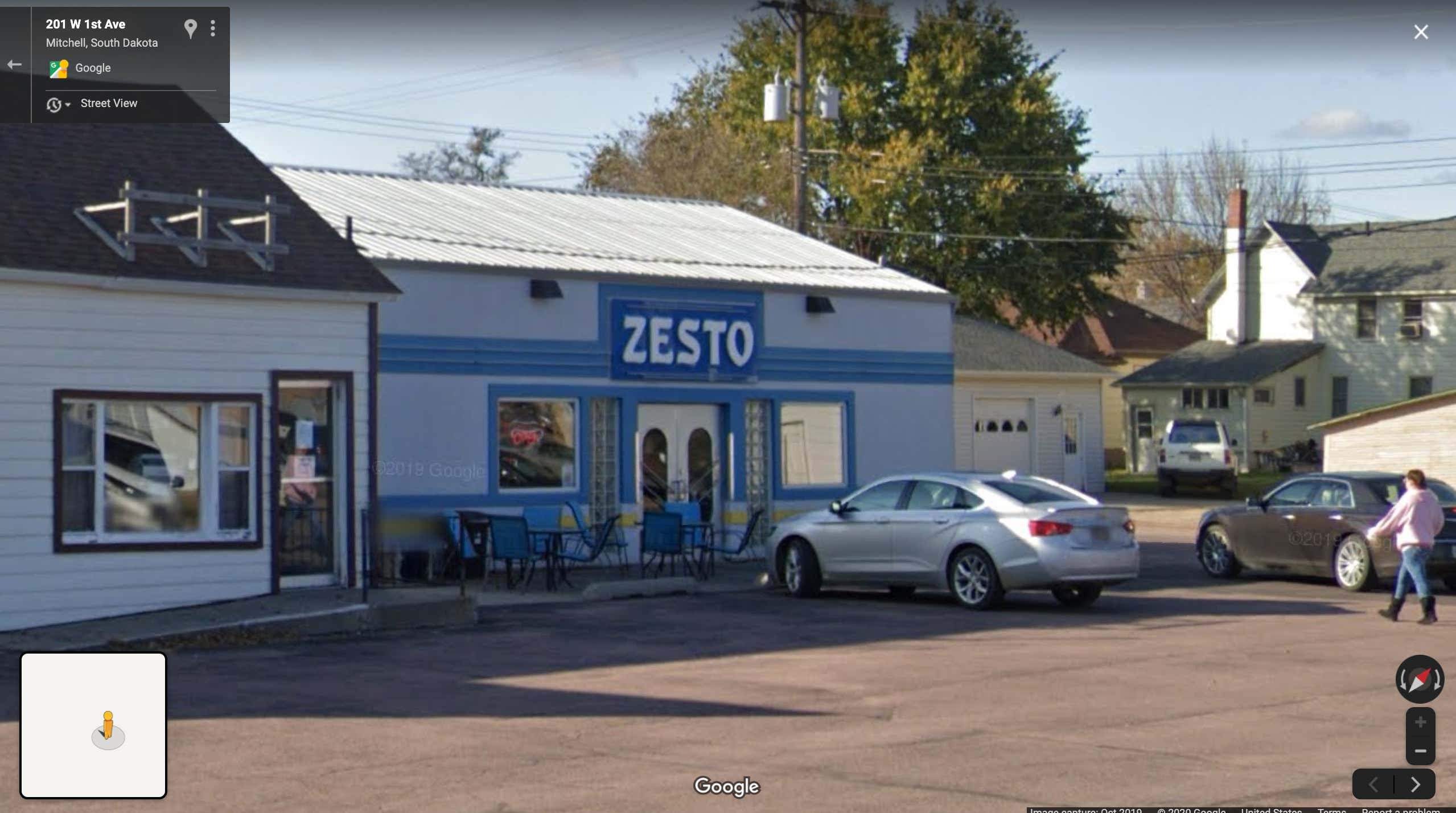 Smack dab in the middle of a parking lot, the highest-rated restaurant in Mitchell is your obvious choice for dinner. You splurge and order two of Zesto's famous Dysentery Dogs with a side of fried goiters for $4.50 each. 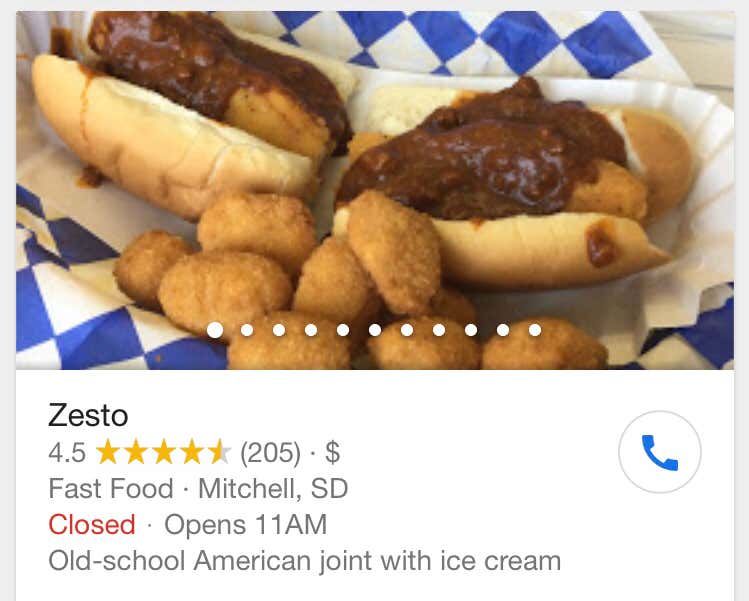 You and your wench scarf down your meals like starving cannibals with scat fetishes. Delicious. She looks delicious too. And if it weren’t for her ulcerative colitis, you’d be fucking her in the Zesto bathroom stall right then and there.

According to her dating apps, she wants a guy who treats her like a queen. And you just so happen to have access to a castle. 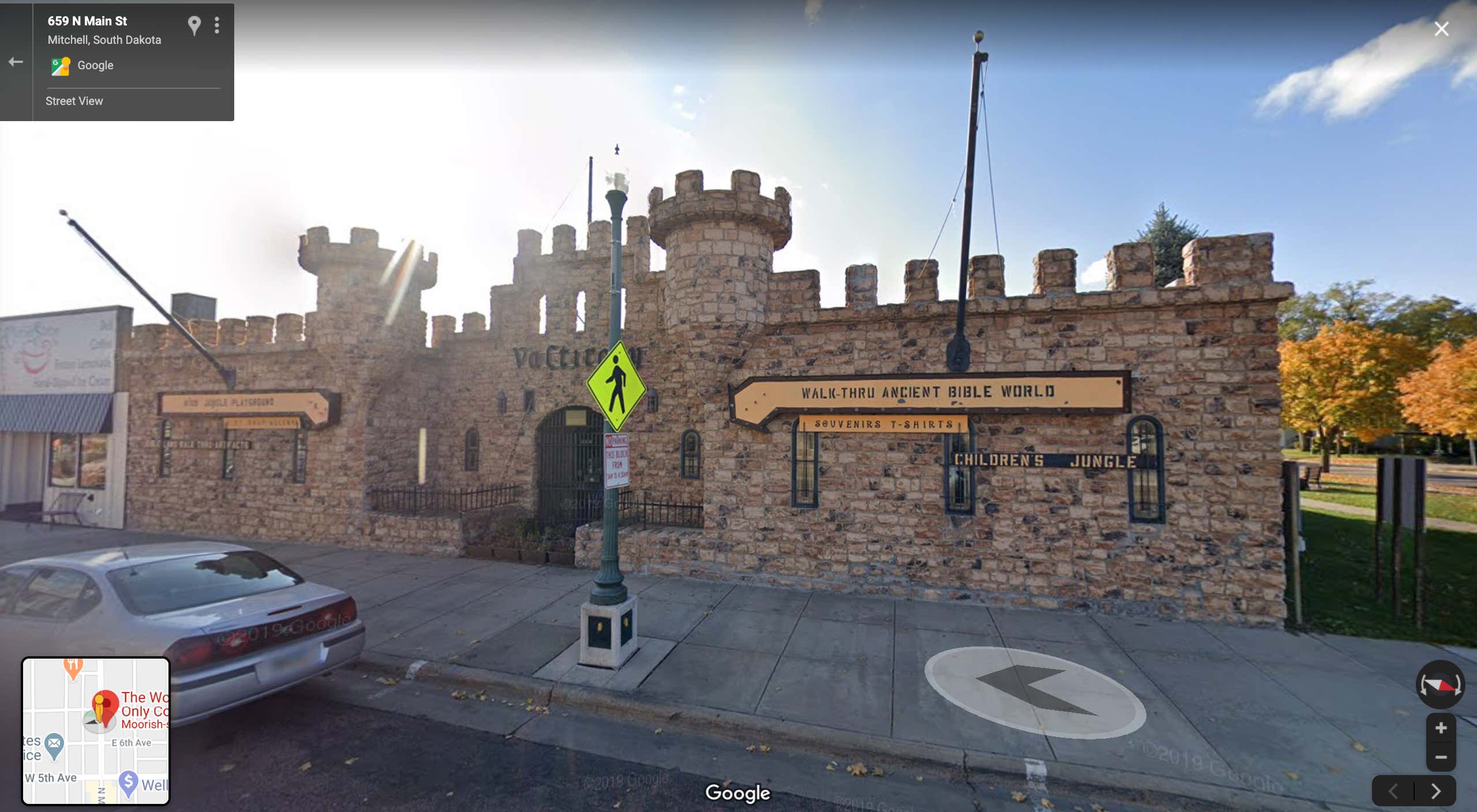 Right in the heart of Mitchell, Valtiroty Bible Land Park not only offers free tours, but it's also home to the largest children's jungle north of the Caribbean. Little statues of St. James, St. John, Jesus, Noah, Cain, the Pontius Pilate, and all the other top stars from the Bible line the halls and walls of the dimly lit museum. How sensual. 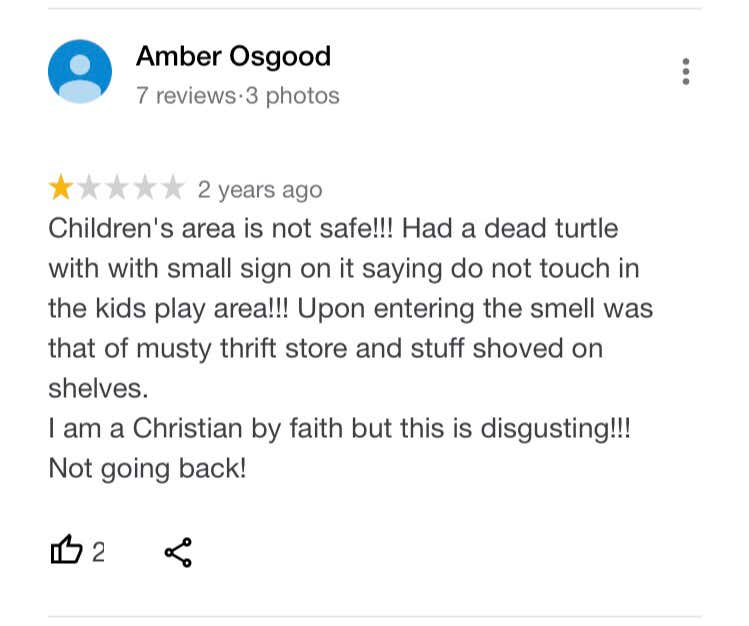 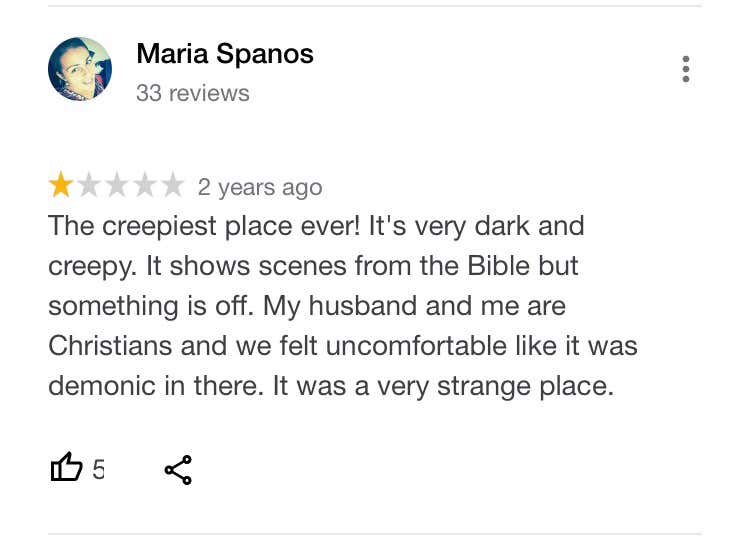 By the end of the tour, your date is certifiably spooked by the mannerisms of the staff and ambiance of the building. "1.8 balls," she mutters. You remind her that as an adult woman, she’s the last person who should be scared right now. But that doesn't calm her nerves, so you offer her a gift from the souvenir shop as reconciliation. 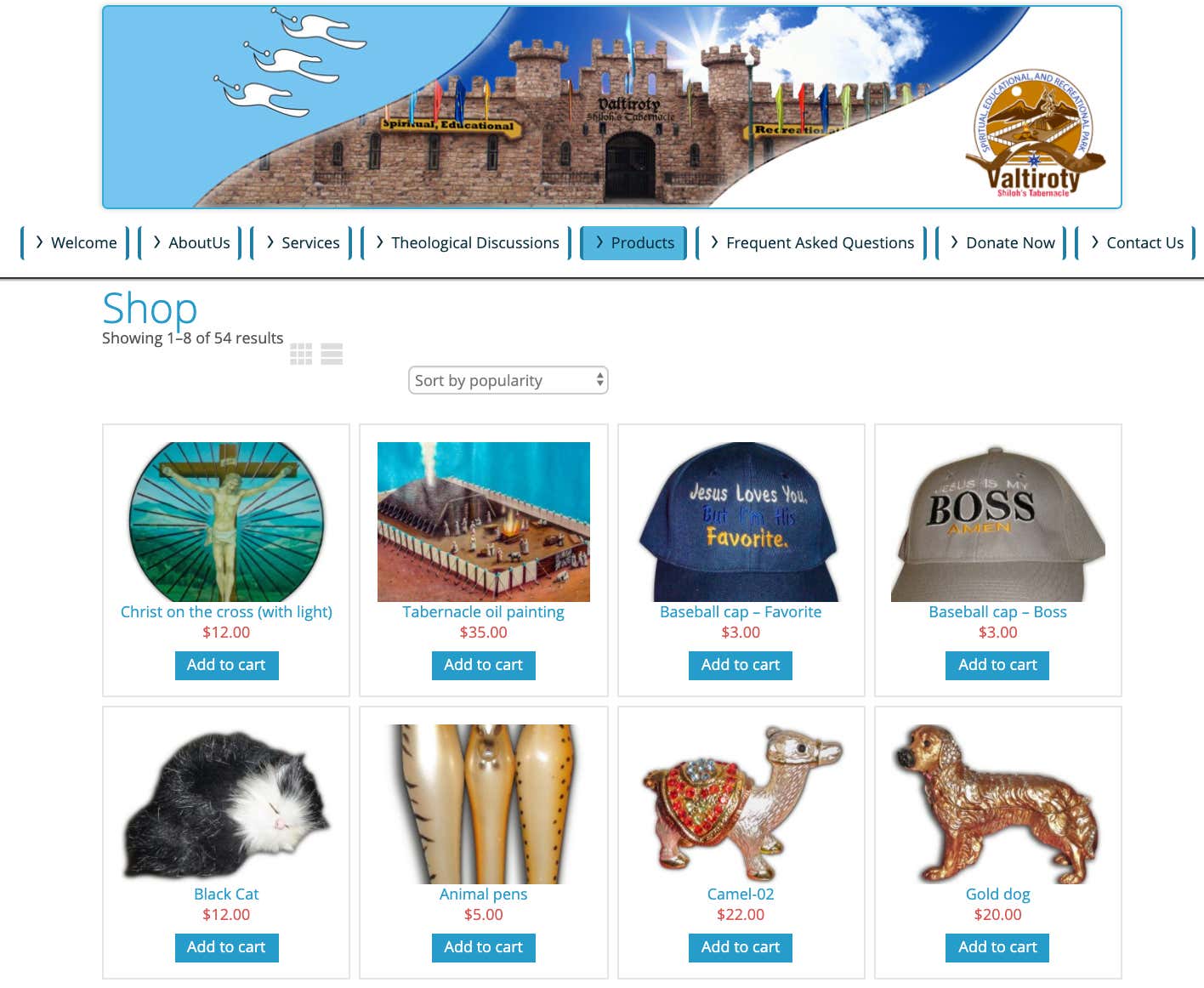 While the $12 black cat is certainly tempting, your alopecia and her visible dandruff could benefit most from the $3 Jesus-themed baseball caps. She reluctantly puts hers on and the two of you trudge out of Bible Land in desperate need of a saving grace.

Now hold on now. What the hell is that up there on the left? The Taj Mahal? Saint Basil's Cathedral? Not quite, but it may as well be. 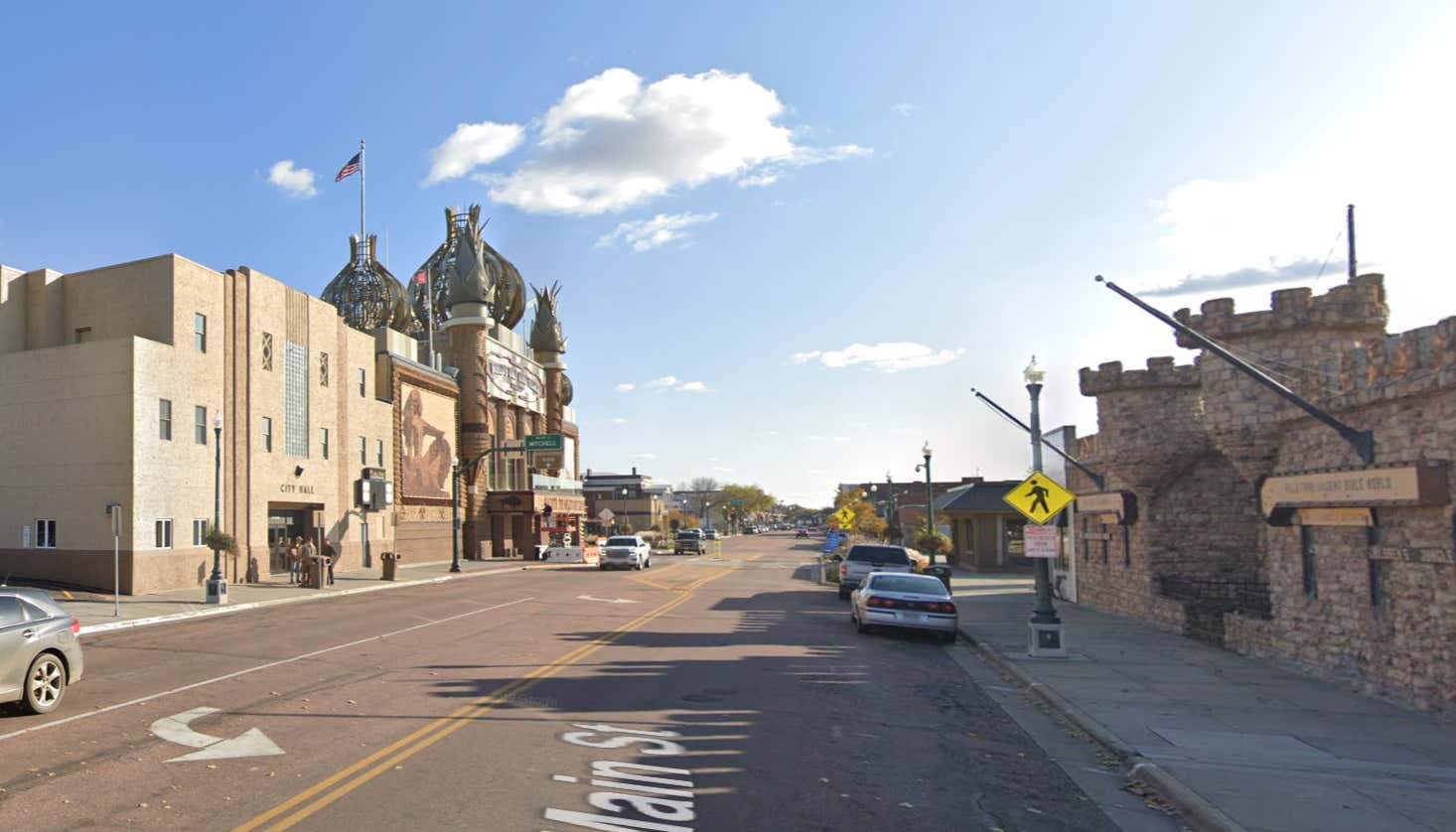 It’s the World’s Only Corn Palace, which is especially remarkable considering all of the architects and city planners across the globe who have probably tried and failed to construct their own corn palaces. You and your date are in awe. 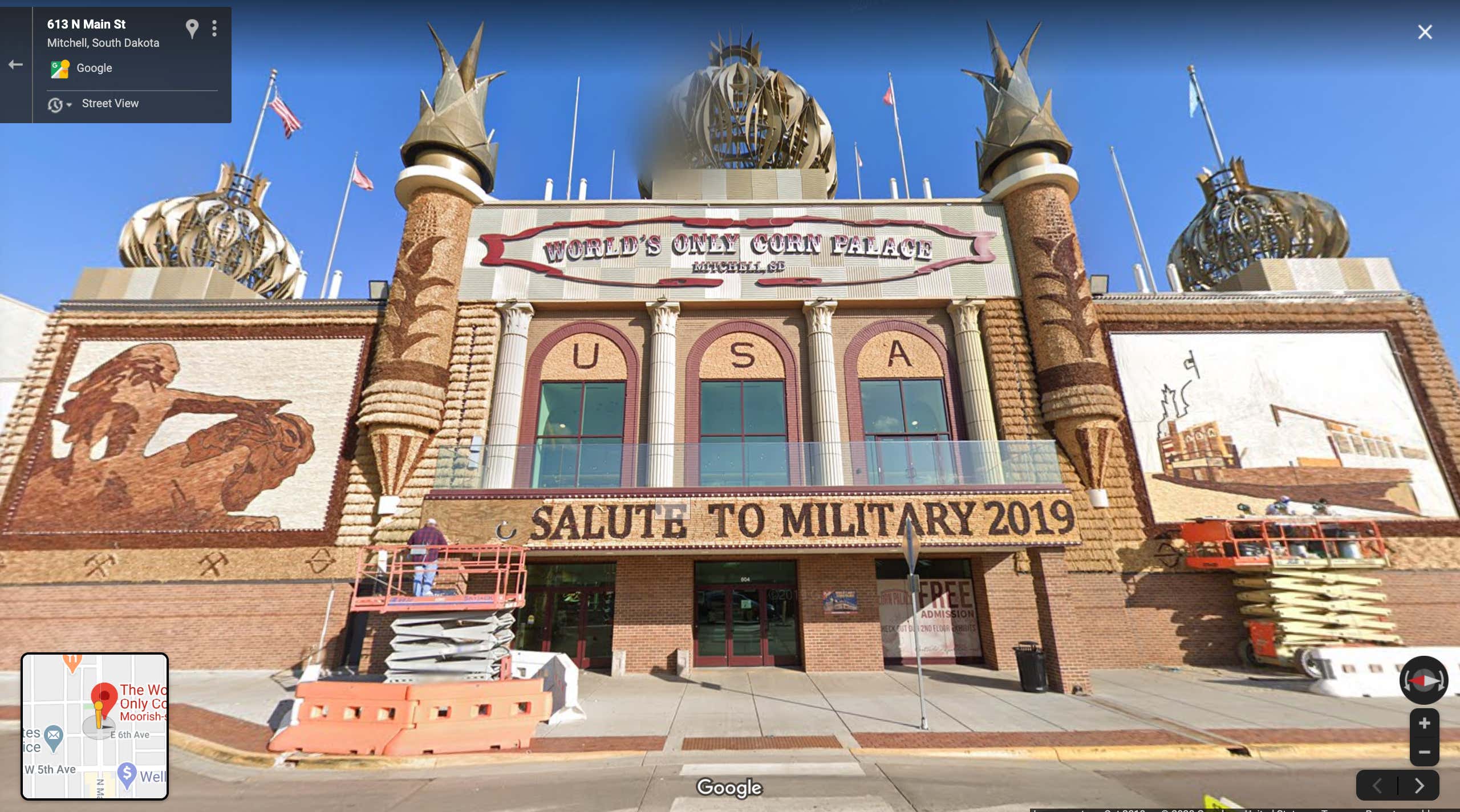 Nicknamed 'The Great Sphinx of the Great Plains' and 'The Mount Rushmore of South Dakota,' The World's Only Corn Palace is quite possibly the only tourist attraction that could save your date at the moment. Sure, you could've stayed home and just admired the monument from the Corn Cam live feed... 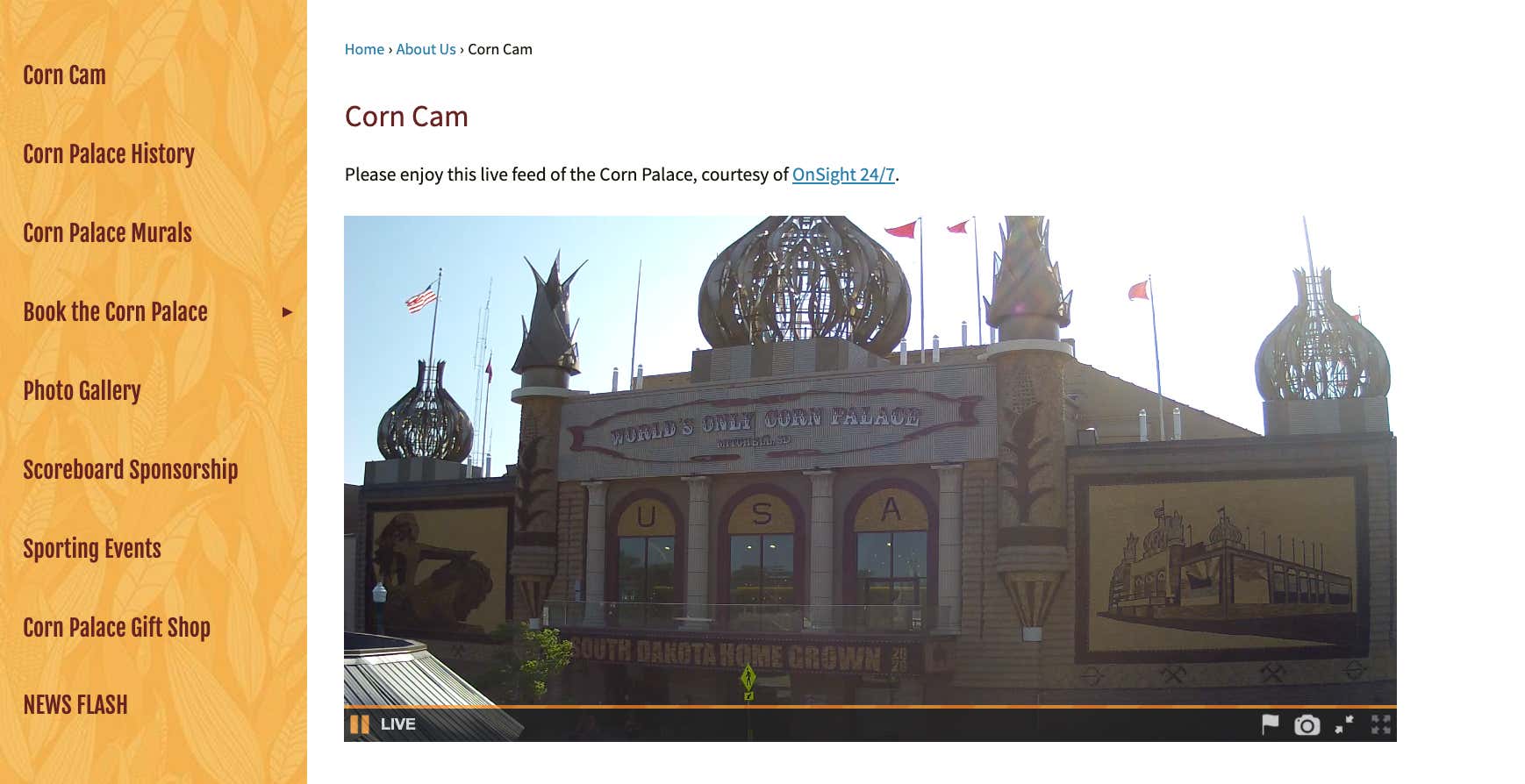 But you were thinking on your feet and bought two $8 tickets to the "90's Hip Hop Party with Twista and Do or Die" that was coincidentally taking place inside of the Corn Palace that night. 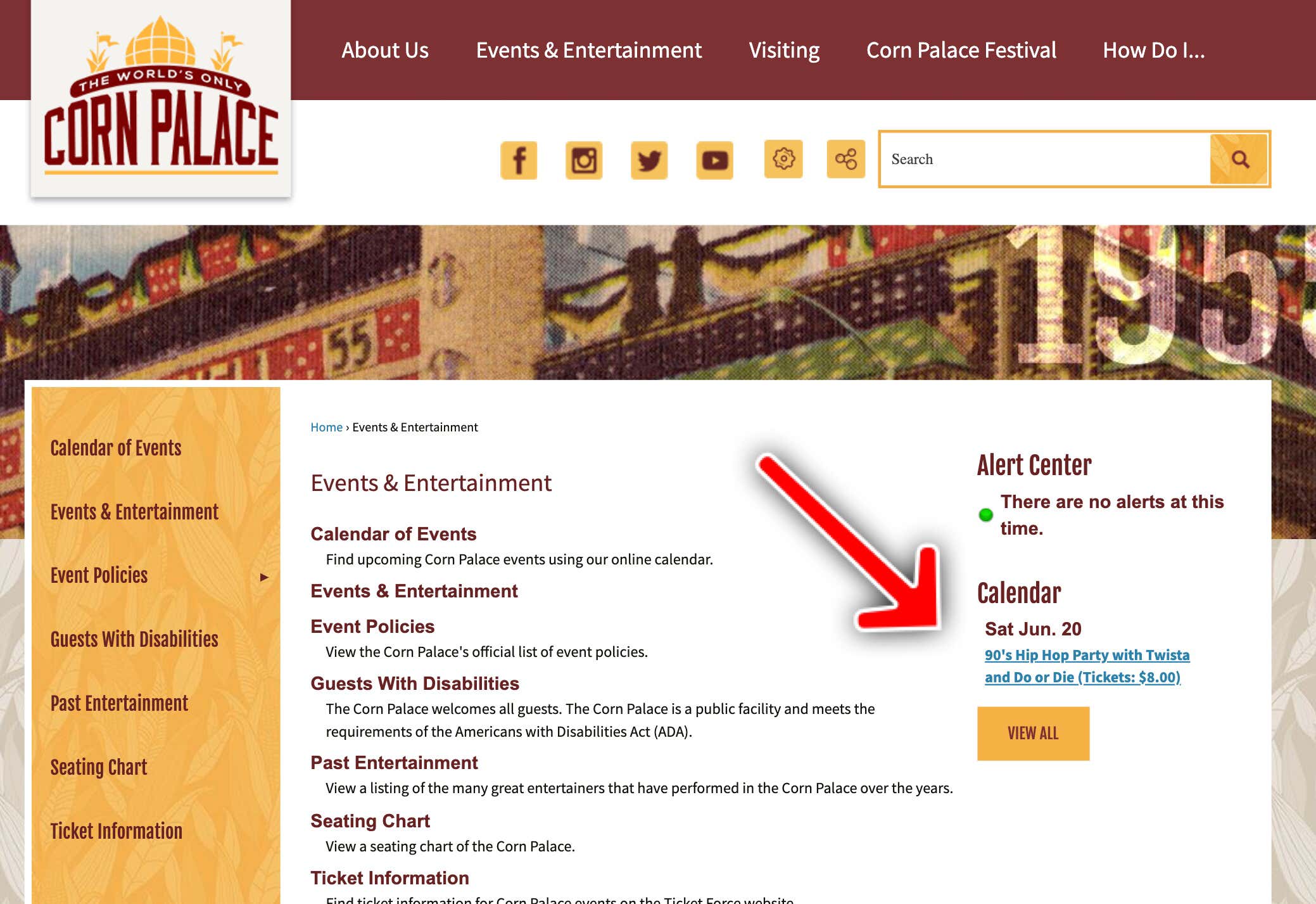 You lead her into the palace and call her your "corn muffin." She loudly moans. 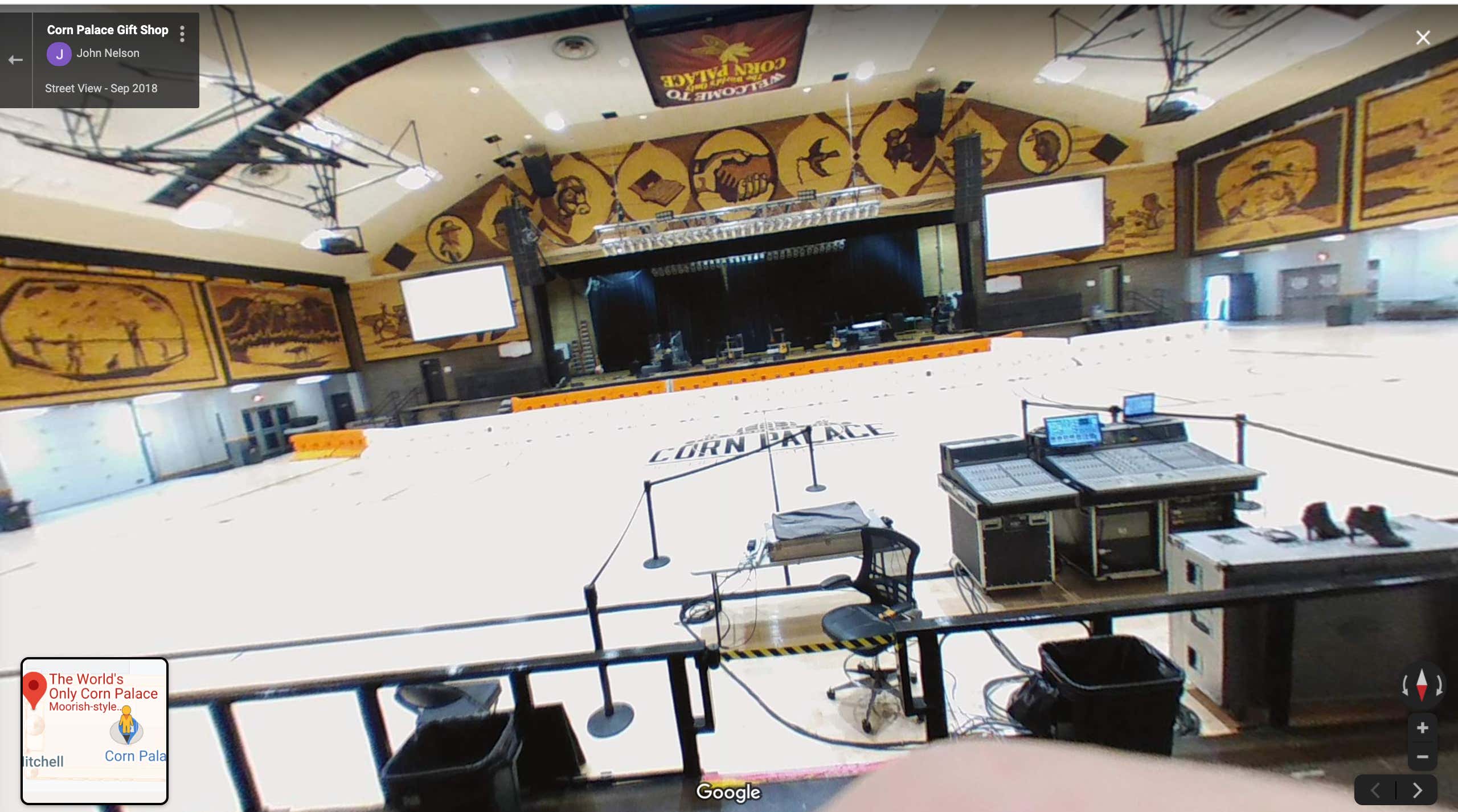 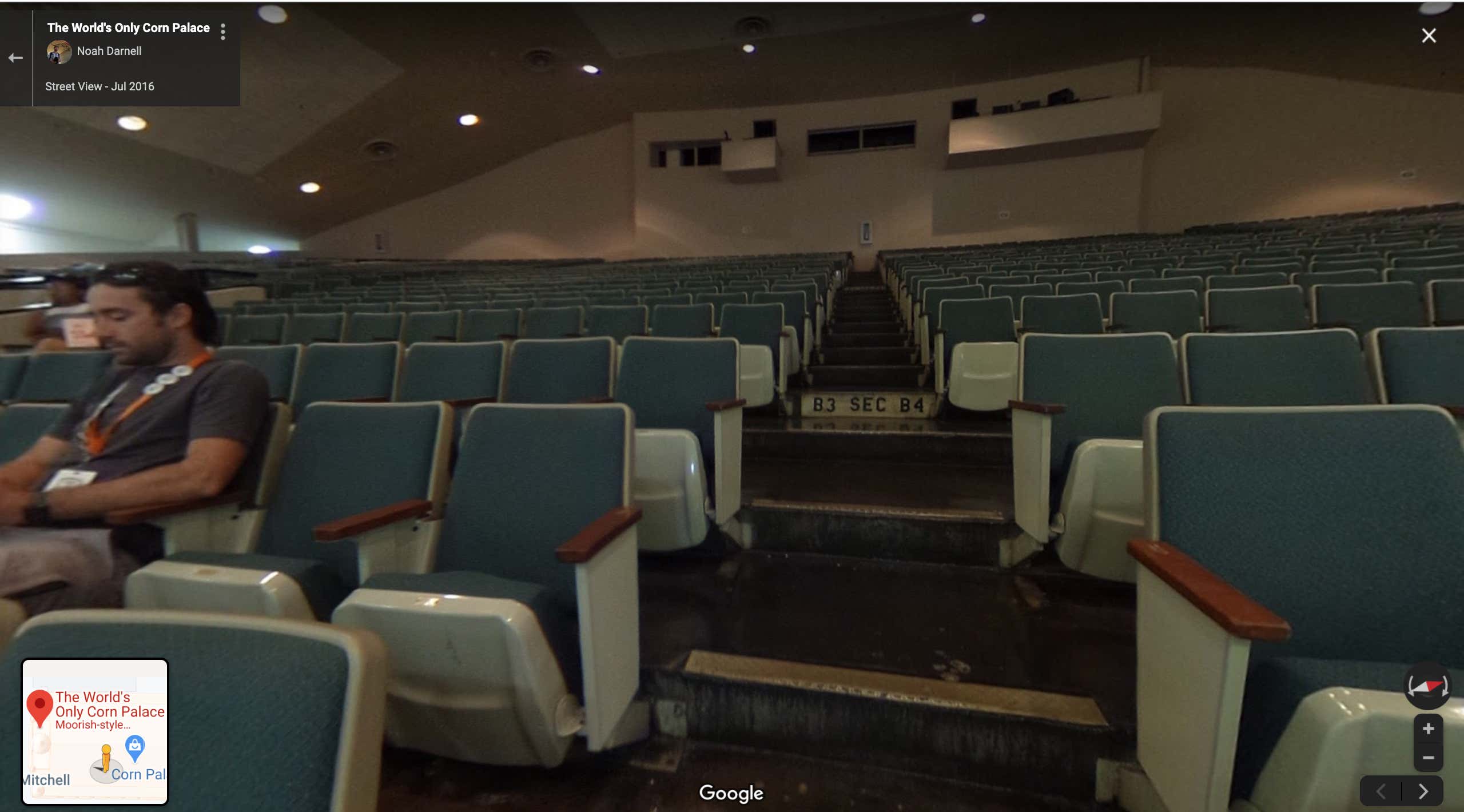 Channeling your inner Drew Brees, you take a break from foreplay to point out the artwork of the interracial handshake above the stage. You remark how inspiring it is that the Corn Palace is actively solving racism in South Dakota. She quivers. 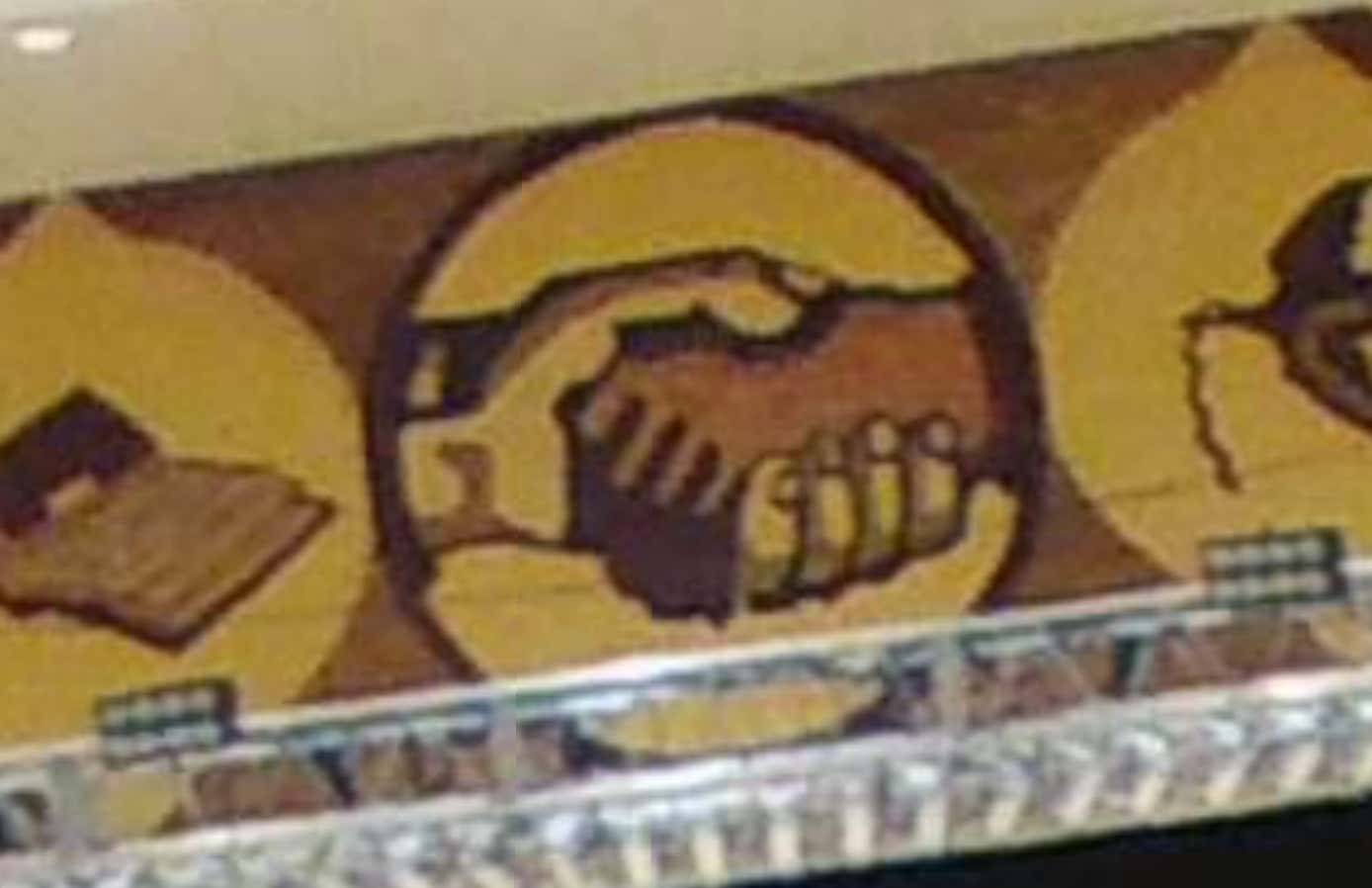 The big show is about to start, so it's time for a quick snack. And whenever a movie buff like me or Jeff D. Lowe is munching on a scrumptious bag of popcorn at the local theatre, we think to ourselves, “I just wish this was all one solid, rock-hard glob that I had to grasp in my bare hand like a softball in order to eat." Thank God the Corn Palace's famous corn balls are only $3.50 a pop. 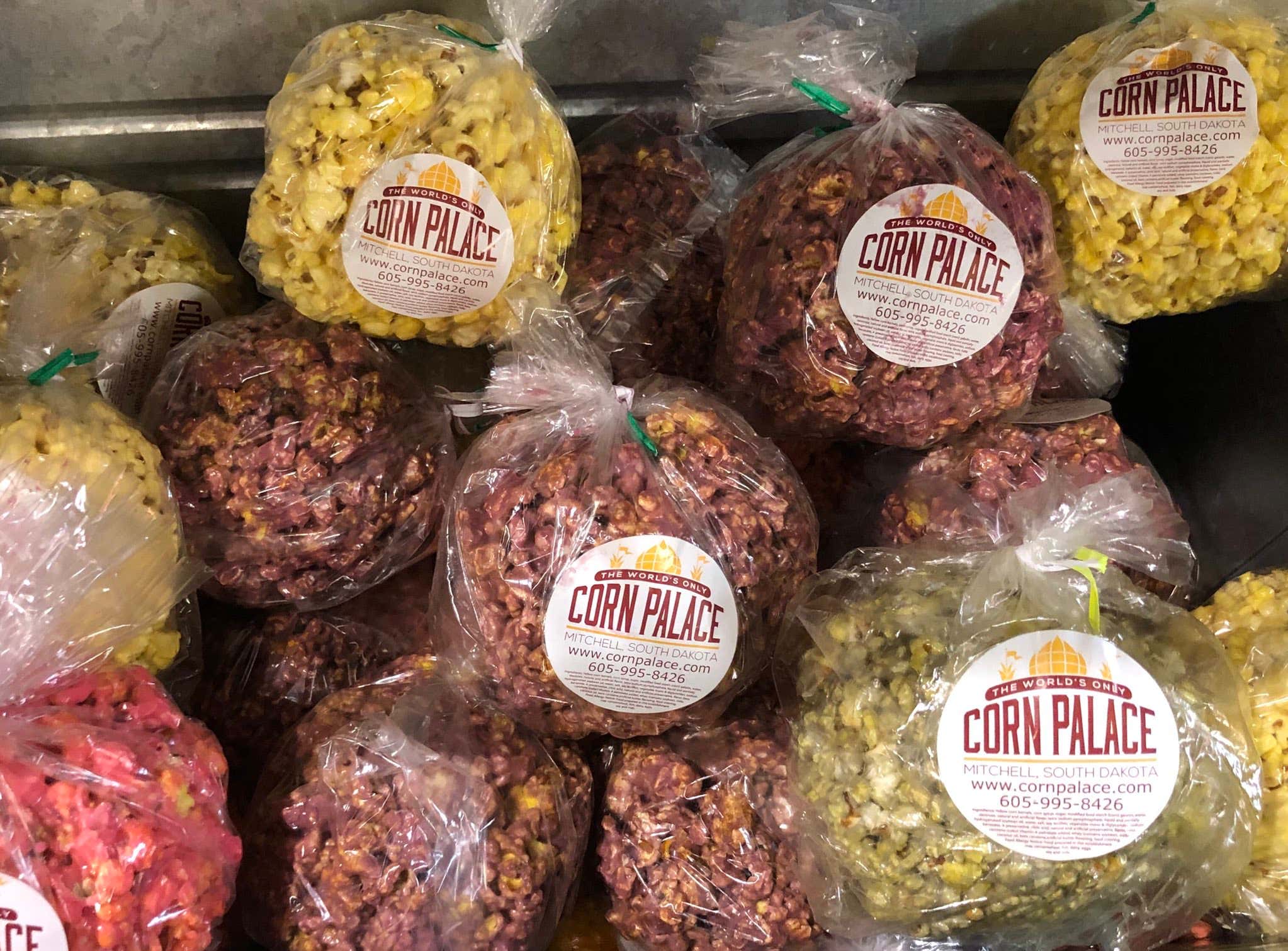