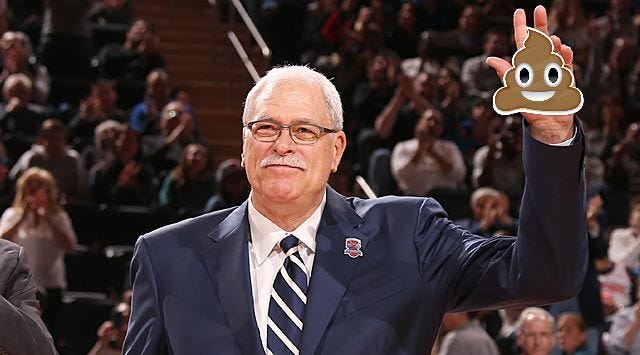 NY Daily News- Phil Jackson already has summed up this disastrous Knicks season by calling it “an experiment that’s fallen flat on its face” and “a project gone awry.”  He offered a more time-tested catchphrase to describe his first full year on the job as the $60 million president of the 61-loss Knicks at a town-hall meeting Thursday night with season-ticket holders at the Theater at MSG.  “S— happens,” Jackson said to laughter. “That’s something that we all know. . . . And this season it did happen to us.”

During the 48-minute roundtable discussion that also included GM Steve Mills and MSG personalities Al Trautwig and Alan Hahn, the Zen Master typically didn’t offer too many specifics on “the plan” that he previously had alluded to in a video message to fans earlier this week.  But he offered a glimpse into what he’ll be looking for this summer, when the team will be armed with a lottery draft pick — possibly first overall — and at least $30 million in cap space to sign free agents.  Jackson, who got the Knicks fined last month by the NBA for commenting about Ohio State guard D’Angelo Russell while on a scouting trip, wryly replied “I do” when asked by the moderators if he knows who the Knicks would take with the No. 1 overall pick should they win the lottery.  He did acknowledge that the Knicks “have no big men,” and the consensus top two picks — Duke’s Jahlil Okafor and Kentucky’s Karl-Anthony Towns — both will be participating in the Final Four this weekend in Indianapolis.  “I think it’s gonna be worth watching,” Jackson said. “A draft pick can move an entire organization forward.”  Mills actually garnered the largest ovation of the night when asked about the possibility of trading this year’s pick; he referred to recent team history by stressing that the Knicks “have to resist the temptation to trade our picks all the time.”  Notably, Jackson also admitted “a good starting point would be a guy like (former Knick) Tyson Chandler, a defensive (big man).”

Oh Phillip, why do you do this to us Knicks fans? “Shit happens” is for when your awful point guard causes a brawl that gets half of the team suspended for Games 6 and 7 of the playoffs. “Shit happens” is for when your superstar gets posterized on a block and your team’s best season in more than a decade ends in the second round of the playoffs against a long-time rival.  “Shit happens” is one step above when The Dude says “That’s a bummer man” in The Big Lebowski.  This season is much uglier and disturbing than “shit happens”.  You sold low on every asset the Knicks had.  Tyson Chandler, J.R. Smith, and Iman Shumpert are all gone and none of the players the Knicks got back have established themselves as NBA rotation guys.  The coach you pay $25 million to for the next 5 years may be the worst coach in the league.  And of course, there’s the whole “worst record in the NBA despite not actively trying to tank until it became apparent we absolutely sucked” thing.  So yeah, “shit happens” doesn’t quite cover it.

But even with ALL THAT BEING SAID, you have a Get Out Of Jail Free card that will wipe away all this shit.  And that is the lottery pick.  And you have to hit that pick, whether it’s the first pick of the draft or not.  As just a stupid fan/blogger, I am currently on Team Towns.  But that’s just because Jahlil Okafor has looked like hot garbage the last few Duke games.  I can be swayed either way and will 100% drink the Kool-Aid of whoever the Knicks choose.  Because this is the shitty life I chose as a Knicks fan.  I have to believe things will get better or else I would have blown my brains out some time during the Isiah Thomas era.  But please, please, PLEASE just promise me that the size of a player’s ass won’t be the deciding factor in who the Knicks draft.  Or else I will just lose it.  In Phil We Trust (mostly because we don’t have any other choice).