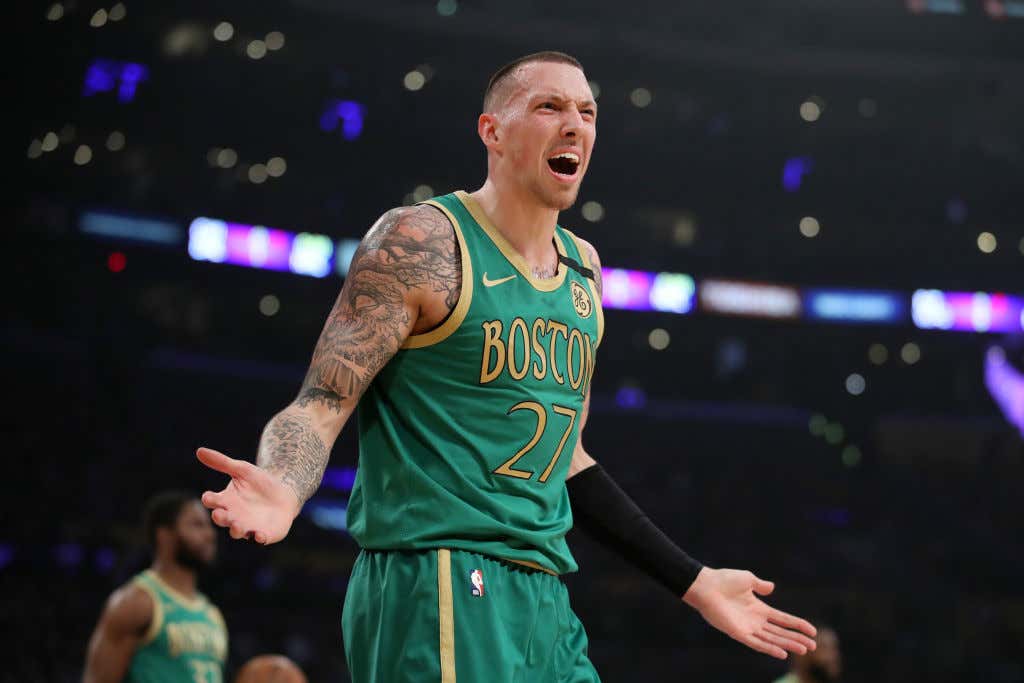 Now that we've caught win of some of the ideas that the NBA owners are talking about in an effort to actually create some homecourt advantage I figured it was a good opportunity to come up with my own selection as to who I would designate as the player who could go from 6 fouls to 7. In most cases, I imagine you would assume this choice would go to the best player on a team.

Maybe you would want to give it to Jayson Tatum. I would tell you that would be a waste. Why? Well in 59 appearances Tatum has had at least 3 or 4 fouls in just 23 games. He's had 1 or 2 fouls in 27. Only once has he had at least 5 fouls. We've seen Tatum develop into a damn good defensive player all while not being a foul machine. He's not my choice. Kemba's pretty important I would say, but he's not my choice either. In his 50 appearances, he's had 3-4 fouls in only 7 of them. A total of 31 games he's lived with 1-2 fouls and also has only had at least 5 fouls once. A popular choice I imagine would be do it all savior Marcus Smart. Well, in his 53 games he's had 1-2 fouls in 23 of them and 3-4 fouls in 24. He does have 4 games of at least 5 fouls and 1 game with 6, but even he doesn't need it in my opinion.

My choice is pretty simple. It's Daniel Theis

That might sounds weird to some, but I can explain. First the foul issue. In his 58 games he has had 3-4 fouls 31 times and at least 5 fouls 10 times. He's fouled out (6 fouls) 3 times this season. It's pretty widly accepted that Theis gets perhaps the worst whistle in the entire NBA. Doesn't matter if he's straight up, doesn't matter if he breathes on a player, he's getting a foul called. I assume if you are reading this blog you know how important Theis is to how this team plays on both ends, but as always here are some concrete numbers to help support my claim.

- This season Daniel Theis has a 43.9% BLK%. That's the 10th best percentage of any playoff center. Better than guys like Bam Adebayo, Montrezl Harrell, Al Horford, Nikola Jokic, and Domantas Sabonis. Last time I checked, that's an important need for this team.

- The starting five of Kemba/Jaylen/Hayward/Tatum/Theis has the highest total of minutes together (188) with a 121.1 Ortg / 108.5 Drtg / +12.5 net rating. That's the second highest net rating of any lineup combination that has played at least 100 minutes together. The second most used lineup of Kemba/Marcus/Hayward/Tatum/Theis has 108.6 / 95.5 / +13.1 metrics. You look at almost every successful lineup combination that has actually played a decent amount this year in terms of net rating, Theis is involved in pretty much all of them.

- Think of how the Celtics play offensively. Their offense works best when they have a pick and pop big on the floor. Who is a better pick and pop option than Theis? People forget he had a 60% 3P% in March. That's a little outrageous, but can he shoot like 35-38% in a playoff series? I say yes.

Now I understand a lot of people will bring up guys like Robert Williams. I love Timelord, but this is the playoffs we're talking about and if there's one thing we can all agree on its that Williams has not exactly been reliable so far in his career. Sky high potential, but we have see nothing that tells us he's ready for the moment. His on/off splits aren't all that great. Offensively their rating dips from 112 to 109 when he's on the floor and their Drtg goes from 105.3 to 108.6. Their AST% goes from 56% to 50%, REB% drops from 74% to 66.2%. Those are real concerns. Maybe you would be OK with Kanter getting extra minutes, but what is the one thing we know happens in the playoffs? Teams pick apart your biggest weakness. Remember when we saw LeBron put Kelly Olynyk into a switch and just drove at him every possession? The exact same thing will happen to Kanter in a playoff series. His drop coverage is big time terrible.

It's not only important to give Theis that extra foul because of his on court production, but it's almost more important given what their other options look like. Especially in today's game where things are slated more towards his style than either Kanter/Timelord. There is really only one other name I guess I would consider, and that's Jaylen. He tends to stack up early fouls given who he guards, in his 50 games he's had 3-4 fouls in 25 of them, 5 fouls in 4 and 6 fouls in 3. My only reason for not going Jaylen was this team does have the wing depth to make up for it. That's not the case when it comes to Theis and this team's frontcourt.

I can't imagine this idea will be passed, it changes a lot and the league is hell bent on making this playoffs as legitimate as possible. But if it does somehow become real, the clear choice for Brad/Ainge is to give that extra foul to Daniel Theis.