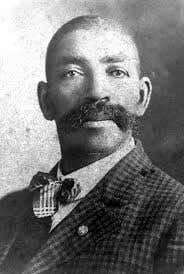 That man right there, is motherfucking Bass Reeves. An absolute legend of the Wild West. You hear about Wyatt Earp. Wild Bill Hickock, Butch and Sundance, Billy The Kid, Jesse James, and Doc Holiday. You've seen the movies, you've heard the legends. You might have even heard of some of Bass Reeves tales because both "The Lone Ranger" and "Django" were supposedly based on him. Yet his name and his story hasn't been given its proper due.

Reeves was born a slave in Arkansas in 1838 and eventually became the personal slave of a man named George Reeves. George was a prominent figure. He was speaker of the house for the State of Texas and a Colonel in the Confederate Army. And I guess Colonels just brought their slaves to war with them and Bass Reeves supposedly even fought in a few battles.

One night Bass and George were in a card game together and they had a dispute. I am going to go ahead and assume that George was being a cheating scum bag since you know...he was a slave owner. If you're playing cards you better play by the rules. Bass felt cheated. He did the only thing he could do in that moment and...punched his owner/Speaker of the House/Colonel square in the face. Laid him the fuck out. Probably one of those moments that feels AMAZING for one second and then is immediately followed by a major "oh....fuck, what did I do?". So Bass took off. Somehow escaped and made it to Oklahoma where he basically lived a Dances With Wolves situation. He lived with the native peoples of Oklahoma. Learned their languages and life on the plaines. He stayed out there as a fugitive until he got word that good ole Abe Lincoln had signed the 13th Amendment abolishing slavery. Thenceforth and forever free.

Bass Reeves returned to Arkansas, got a farm, got a wife, and had himself 10 children. Life was...not good. You'll be shocked to find out that post-reconstruction Arkansas was not great for African Americans. Reeves began to seek opportunities where he wouldn't be subject to Jim Crow laws.

Reeves had a very particular set of skills. Skills that were extremely valuable as criminals fled from all over the country to the West.

He went West. The "Indian Territory" was nearby and became a de facto lawless sanctuary for criminals and fugitives. This area of the Kansas Territory was so dangerous that historians have literally compared it to Afghanistan. These people living in the Wild West were cold blooded killers. No respect for the law. It's been called the greatest battle ground between crime and law in the history fo the United States. Bass's reaction to this description:

Bass knew the Natives and knew the land like the back of his hand from his time living as a fugitive in the area during the Civil War. He led the US Marshalls as a scout into Indian Territory before US Marshall James Fagan decided to deputize Bass Reeves in 1875. This made Reeves the first African American Marshall in west of the Mississippi. And...also the best Lawman...period. He's been largely overshadowed by some of the Wild West names I listed above and that is a fucking crime because this guy is a legend. An unparalleled resume. Over 3000 arrests, killed 14 men in shootouts, and never even got a scratch on him. Remember that scene in Django with the Brittle brothers?

Well it's thought that this story was based, at least loosely, on the story of Bass Reeves and the Brunter Brothers. The three brothers supposedly caught Bass alone one time and had him at gun point. Reeves took a drag of his cigarette, asked the Brothers sincerely if they knew what time it was, and while one brother paused to think about the question, Bass pulled out two guns, shot two of the brothers, and knocked out the 3rd brother cold with the butt of his gun before arresting him and bringing him in to justice. It's literally the most bad ass leading man thing you can do and it's no wonder that many of his stories have been the jumping off point for many characters and movies in pop culture from The Lone Ranger to Django. And guess what…he's finally, supposedly, getting a real movie of his own(there was one made in 2010 and another in 2019 but they both sucked. Third time is the charm). Amazon was developing a biopic on him but no release date or anything besides the director has been announced.

Anyways, that is the story of Bass Reeves. A 30 year career of being a bad ass Lawman in the Old West. Have a good day.