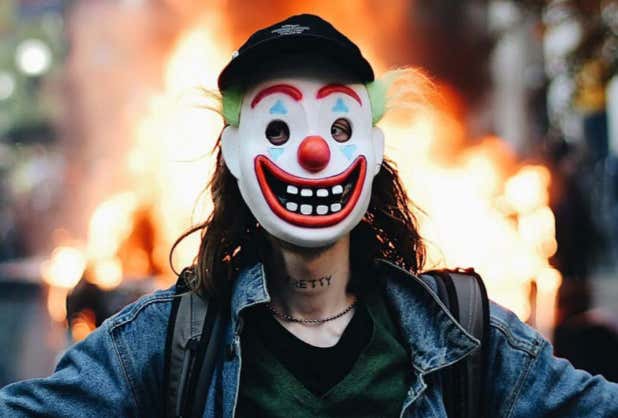 Does this look like the face of a man who hijacked a peaceful protest in Chicago on Saturday?

Here he is without the clown mask, but still displaying the wicked sweet "Pretty" neck tattoo. Every employer's dream.

This beauty's name is Timothy O’Donnell and he's one of the ringleaders that set fires to police cruisers Saturday which sparked mayhem.

Chicago Tribune -  A South Side man was hit with federal arson charges Tuesday alleging he set fire to a Chicago police SUV in the Loop while wearing a “Joker” clown mask during the weekend unrest.

Timothy O’Donnell, 31, was seen on video taken by a bystander on Saturday approaching the police vehicle parked in the 200 block of North State Street and placing a lit object into the car’s gas tank, according to an eight-page criminal complaint filed in U.S. District Court.

After the squad car burst into flames, O’Donnell was captured in a photograph provided by a different witness posing in front of the blaze. Though his face was obscured by the grinning mask, O’Donnell’s distinctive neck tattoo reading “PRETTY” could clearly be seen in the photo, according to the complaint.

That image — as well as several others — were included in the charging document.

Police found the mask in O’Donnell’s bedroom when they searched his apartment in the 700 block of West 19th Street, according to the complaint. O’Donnell later admitted in an interview with law enforcement that he was the one seen in the mask igniting the blaze, the charges alleged.

O’Donnell was one of five people now charged with committing federal crimes in Chicago amid the chaos and looting that struck the city after the police-involved homicide of George Floyd in Minneapolis.

Matthew traveled all the way from Galesburg, IL (wait, where the fuck is Galesburg?) 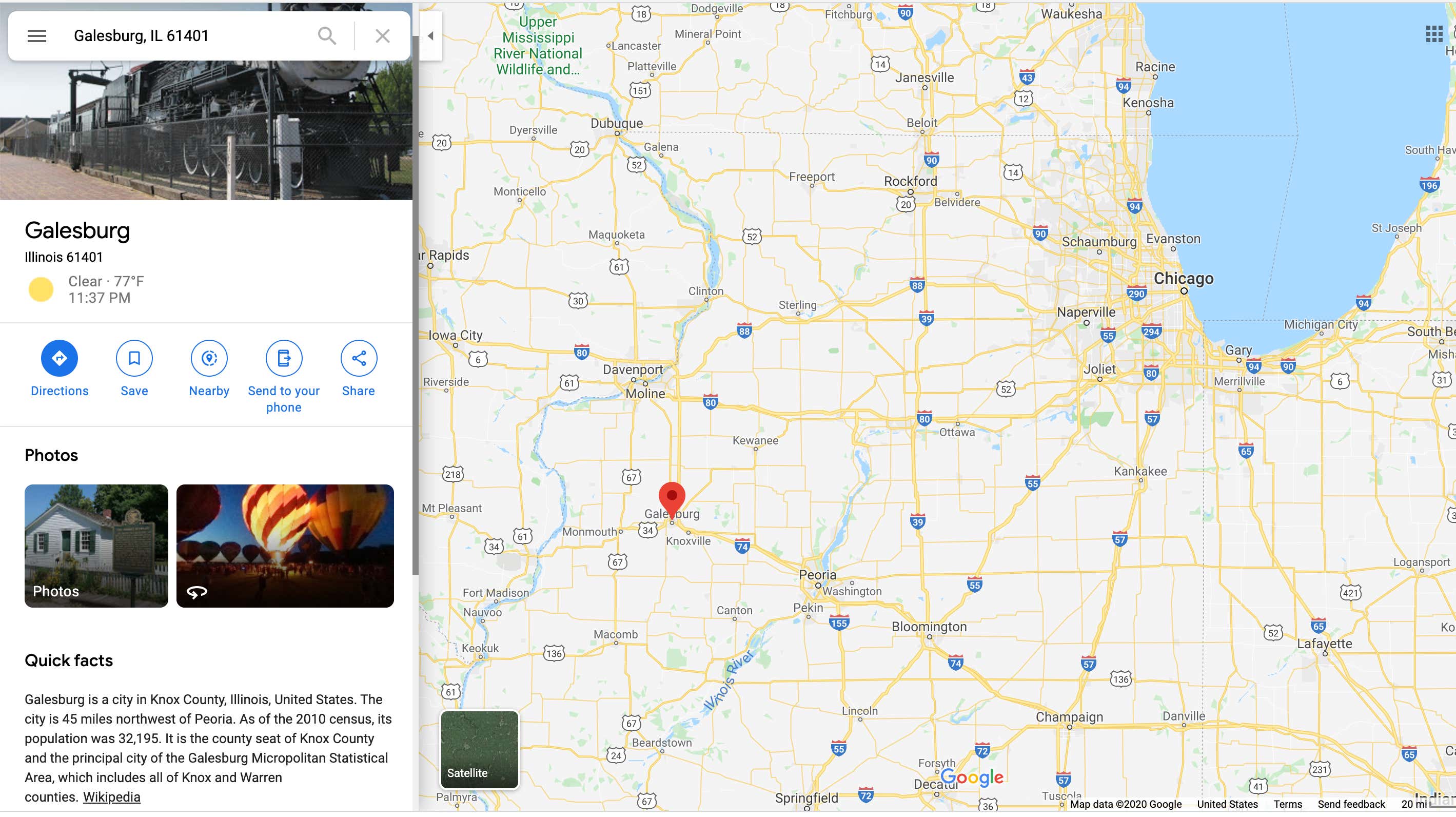 with HOMEMADE BOMBS, first to Minneapolis to cause trouble, and then to Chicago on Saturday.

Chicago Tribune -  An Illinois man arrested in Chicago over the weekend had homemade bombs in his car and had been seen on videos posted on the internet participating in the looting and rioting in Minneapolis and Chicago, according to federal charges filed Monday. Matthew Rupert, 28, of Galesburg, was charged in U.S. District Court in Minnesota with inciting a riot and possession of an explosive device, court records show.

Police found several homemade explosive devices in his car, according to a seven-page criminal complaint. Officers also found a hammer, a “heavy-duty” flashlight and cash, the complaint alleged. In a telephonic hearing for Rupert at the Dirksen U.S. Courthouse, U.S. District Chief Judge Rebecca Pallmeyer granted prosecutors’ request to have him taken in custody to Minnesota to face the charges.

According to the complaint, Rupert posted a messages on his Facebook account on Thursday saying he was going to Minneapolis to protest the police-involved death of George Floyd and wanted “goons” to join him.

The next day, he posted a two-hour livestreamed video of himself participating in the protests and violence that erupted in Minneapolis. During the video, Rupert could be heard and seen encouraging others on video to throw bombs at the police, appearing to light a building on fire, and actively damaging property and looting businesses, according to the complaint.

“Light that bitch and throw it at them,” Rupert said at one point to another person, who lit a device and threw it in the direction of police, according to the charges. Moments later, an explosion is heard in the video and Rupert repeatedly yells, “Good shot, my boy!” as well as “F--- 12,” a derogatory reference to law enforcement, the complaint alleged.

On Saturday, Rupert posted a message saying he was on his way to Chicago. Two hours later, he began posting multiple videos of himself participating in violent acts downtown, including saying things like, “Let’s start a riot” and “I’m gonna start doing some damage,” the complaint alleged.

Several associates were with Rupert when he was arrested, including his live-in girlfriend, who confirmed that he’d traveled to Minneapolis “in order to riot,” the complaint alleged. Also arrested was his brother, Christopher Rupert, 29, authorities said.

Another grade-A piece of shit. Along with his girlfriend and brother.

Let's go to New York for this one.

Samantha Shader, from the Catskills. Age 27.

The Daily News - A pair of sisters from a sleepy upstate New York town are facing charges for hurling a Molotov at cops during a Brooklyn protest over the police custody death of George Floyd.

Samantha Shader, 27, will be prosecuted in Brooklyn Federal Court for lobbing a lit bottle of alcohol at a police van parked near the Brooklyn Museum around 11:30 p.m. Friday, authorities said.

The improvised explosive struck the driver’s side of the van and the four 71st Precinct cops inside managed to escape as the vehicle caught fire, authorities said.

“It is by the grace of God that we don’t have dead officers today," NYPD Police Commissioner Dermot Shea said Saturday.

The elder Shader was charged with attempted murder, attempted arson, weapons possession and reckless endangerment before the feds took over the case, cops said.

Her dirtbag sister too-

The siblings, from Catskill, in Greene County, tried to run away afterward but were caught nearby.

Back to Chicago to close this thing out. Got these pics from a video from my friend who owns a bar on Kinzie and caught this punk in the act along with Chicago PD. No official info on his arrest. So I'm gonna venture a guess here - 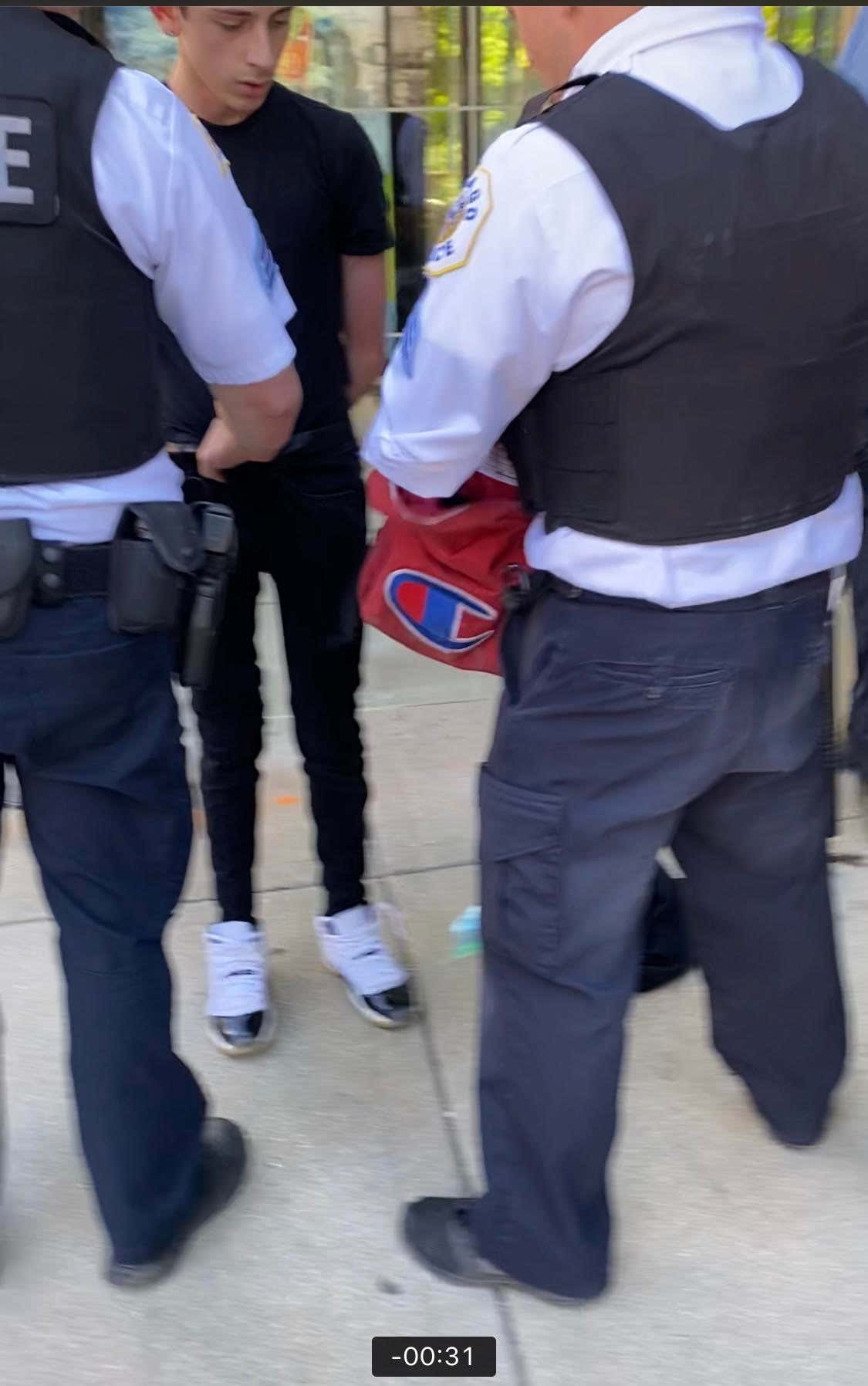 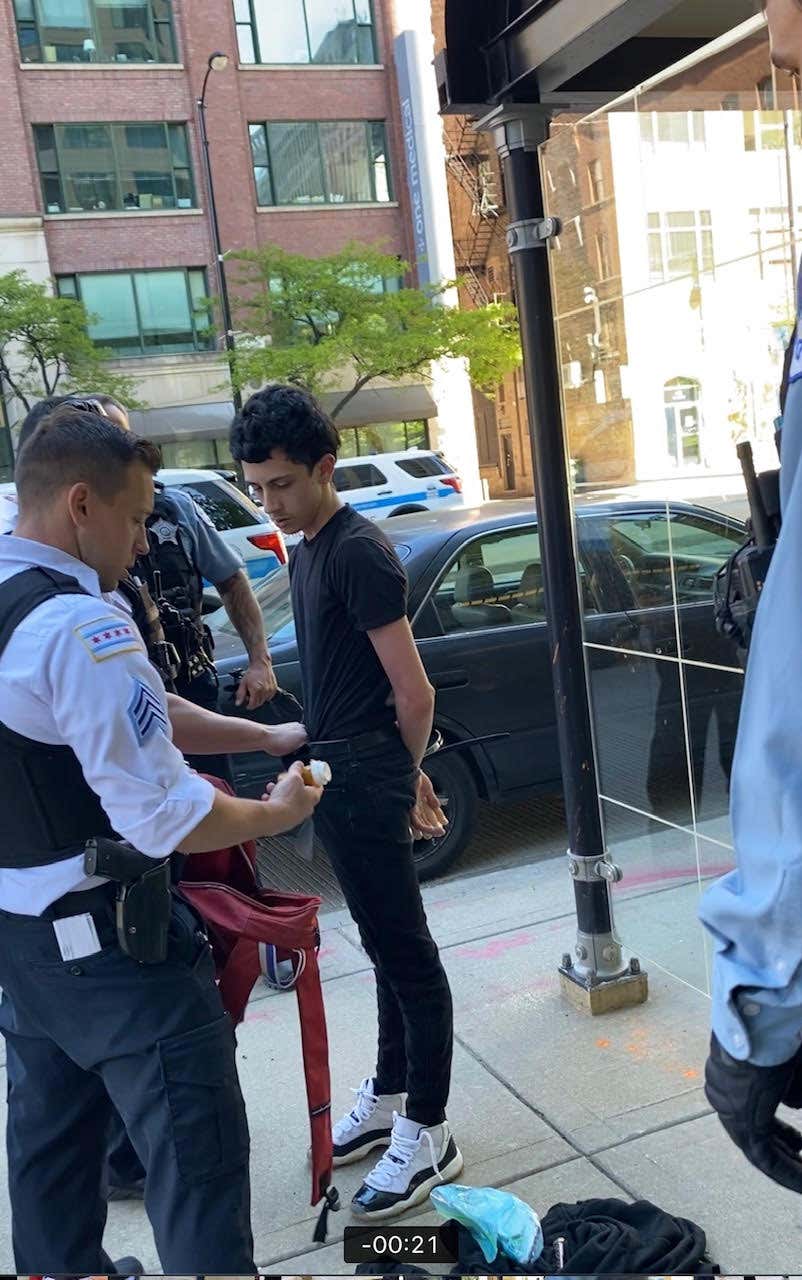 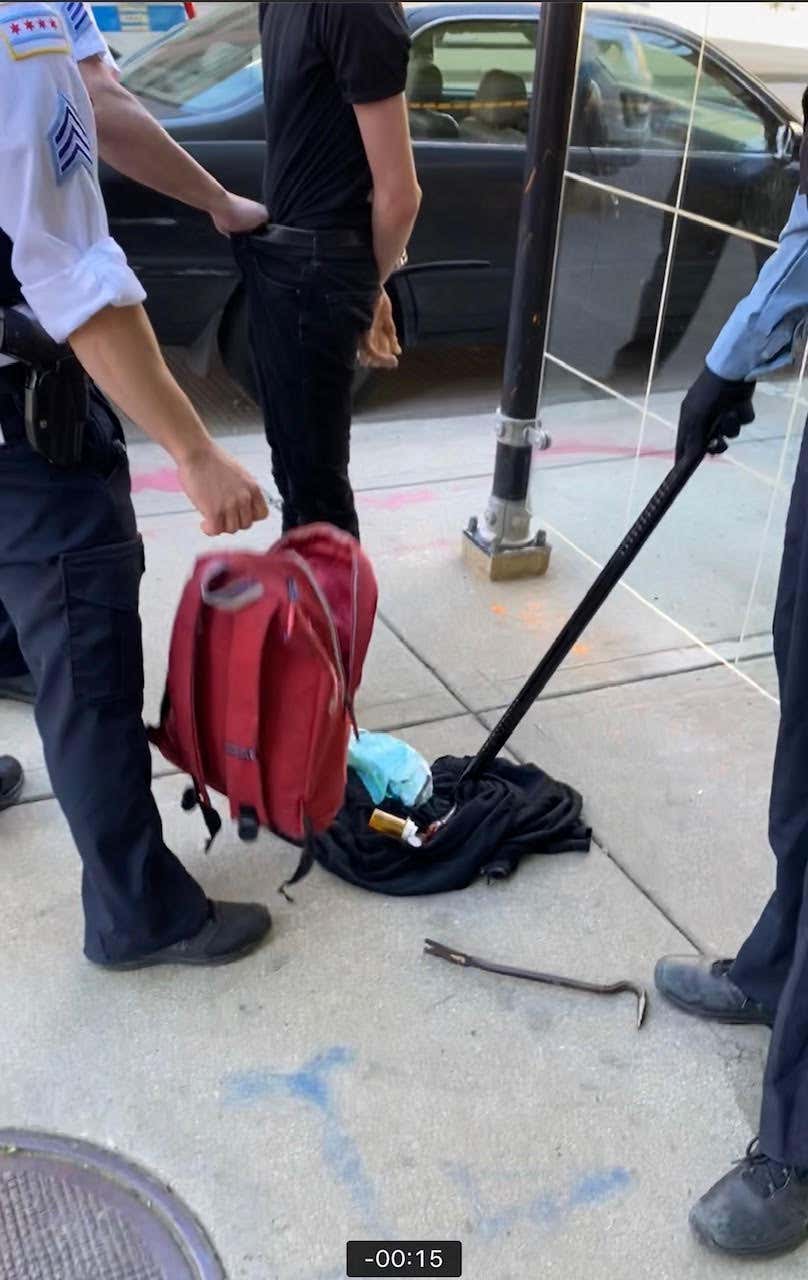 Charles (last name redacted) was detained by officers on Sunday on the corner of LaSalle and Kinzie after being caught trying to pry plywood off a damaged storefront. Police quickly chased him down and upon emptying his Champion backpack (Champion is so back) found lighter fluid, prescription medication in his mother's name, and a crowbar.

Charles' facebook post earlier in the day read "You don't understand my struggle. All the kids at Carl Sandburg cared about is football. Fucking losers."

Charles' grew up in a caucasian household but friends claim he has "sought to identify as Latino very bad" for the last few years. "He makes us call him Carlos", said a Parkland student who asked not to be named, "but he doesn't speak any Spanish."

Charles dropped out of University of Illinois as a freshman last year but his parents paid for him to stay there and go to Parkland. (The JC of Champaign).

Friends said, "he's mad about his lack of followers on Instagram and his live feed not getting any love. So he took his mom's Landrover downtown by himself to break some rules."

After being apprehended at 5:26 pm Central he was booked at 2700 S California Ave and repeatedly told everyone about his dad. He cried a lot and was back home by 11:30.

A giant fuck you to these 4, and everybody else that used the peaceful demonstrations this weekend as a Trojan Horse for their own anarchistic beliefs and destruction. They tried their best to completely undermine and hijack the message of justice and change. It's pretty impressive law enforcement was able to track them down so quickly.