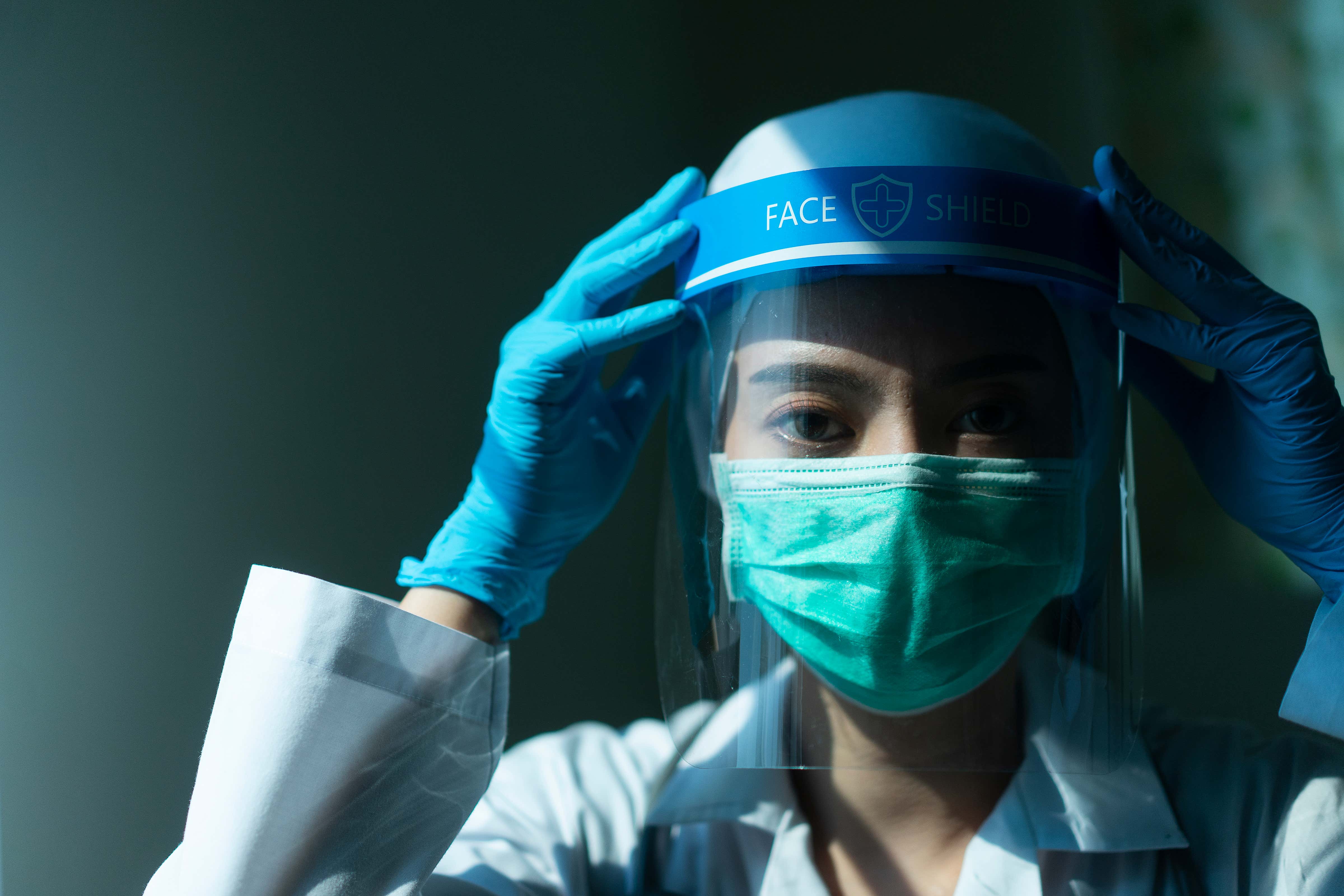 I wanted to take a second to show some love and give a shout out to all my nurses and any healthcare workers on the front lines. I haven't forgotten about you. I'm sure it seems like many people have. Its a weird time for them. In March and April, they were heroes. At the forefront of every discussion. On the front of everyone's minds. From social media to charities to the news, they were the one thing everyone rallied around at the outbreak of corona virus. And then May came around and the conversation began to shift to the economy, and quarantine, and Constitutional freedoms, and hoaxes, and politics, and all this other stuff that failed to take into mind - that whether that was right or wrong, true or false, nurses and doctors were still suiting up every day and continuing to care for the hundreds and hundreds of patients in their hospitals. At least here in New York they were, where it was a legit war zone every day. And when the curve starting flattening and the distancing efforts began to work, it didnt mean that everyone magically disappeared from the hospitals. There was still work - dangerous work - to be done. And these nurses and healthcare workers were still the ones doing it. Patients who were intubated for a month still laying there requiring attention while new patients trickled in. And whether or not there was 1 or 1000 in your ICU unit thats been overrun a turned into a COVID unit, they still had to gear up like they were the ones facing a riot. But, The 7pm pots and pans started to dwindled. And more people began worrying about their tan, and their hair and their eyebrows than they were the safety of nurses.

And then June hit. And to be blunt about it, nobody seems to give a fuck about the nurses anymore. The new controversy came along and now nobody is thinking about them. Its how it always goes on social media and the news - when the new flavor of the week comes along, its as if the old problems just magically disappear. Like we dont have the capacity to be sympathetic to more than one cause at once. In a span of 6 months we went from worrying about the fucking Amazon rainforest being on fire, to maybe the most shocking athlete death of all time, to a pandemic, to changing our entire lifestyle and locking down in quarantine, to now protests and riots - and each step along the way we basically forgot about the previous thing that was our main concern.

Which on some level, I understand. Theres a process - whether its grieving, or outrage, or just good old fashioned gossip. We CARE CARE CARE CARE TALK TALK TALK TALK, and then at some point, with some imaginary, arbitrary amount of time, we stop. Time heals all wounds, you can't hold on forever, time to move on, blah blah insert whatever one liner you want thats about forgetting and going back to normal. But in the case of nurses and doctors, we never had our natural "news cycle," if you will. A new movement swept through society, one that was much more visible, and tangible, and in-your-face came in and overlapped with what was hopefully, supposed to be, the tail end of their crisis that they had fought every day for like 3 months. And now, I see everyone just saying "So corona virus is done, right?" "Quarantine is over" like they've just forgotten everything they've learned about the corona virus. Theres been protesting for a few days and the people who have made their decision to disregarding social distancing are now dictating whether corona virus goes away?

Uhhh what? I dont follow this logic at all. Protesters minds were made up to say fuck the quarantine, theres a more pressing issue that needs our attention, and for that I commend them. But Corona Virus doesnt know you're a protester. COVID-19 cant tell if you're black or white. And we all know the time period for incubation and symptoms by now - it can take up to 2 weeks. So whats this idea that we're out of the woods and the protests have just snuffed out corona virus?? COVID out here like the 2004 Red Sox at the moment looking like its dead in the water and he's telling all the other viruses laughing at him "Dont let me get one."

I’m not ignorant to the data coming out of some states that show that the virus is not increasing in states that have reopened. I am not rooting for the virus. I am desperately hoping that what we did was effective enough to flatten the curve enough to prevent another outbreak. I personally do believe we kinda starved this thing. I think our stay-at-home efforts worked, and that a virus needs a human host and when those who had the virus either died or beat it, I think that hopefully means the major circulation is over. Kinda like at the end of Fallen with Denzel Washington where he goes out into the woods, isolated all alone to kill himself and get rid of that demon that jumps from person to person. You ever seen that movie? Big time underrated. I think. Havent seen it in years but I remember it being awesome.

But if you have seen that movie you'll remember at the very end, it finds a way to continue to spread. Life (or in this case, death) uh, finds a way. And honestly I wouldnt at ALL be surprised if corona virus spikes like a motherfucker in a week or 10 days or 2 weeks because of these demonstrations.

And while I dont want to speak on behalf of all nurses and doctors because I'm not one myself, I'd have to imagine thats a MAJOR concern, a MAJOR fear, and a really, really shitty feeling. To think that you just legit risked your health, and your parents and grandparents and unhealthy friends' lives, and went through hell every single 12 hour shift...and now theres a chance it might all be for nothing. And whats worse than that, is if you voice your concerns that the protests might just be undoing all your hard work, now you're racist. Now you dont believe that Black Lives Matter. Now you're pro-cop. Insensitive. When really all youre saying is "we were SO FUCKING CLOSE and this might be screwing it all up." And whats adding insult to injury is that is if there is going to be a spike, its gonna be all these protesters that are going to need care. Those nurses that are sitting at home watching this unfold going "Oh no no no. No no no no no. This is a bad idea." are gonna be the ones to have to take care of you.

Now thats not to undermine the cause. Everyone knows how outspoken I've been about this shit so the point here is that you dont have to support one or the other. I realize they are kind of inversely correlated and so they are sorta pit against each other, so it puts you in a pickle. And for that, I dont have an answer. I understand that creating enough commotion to get reform so black people stop getting murdered by police takes precedence over quarantine for some people. For a lot of people. And I understand that society is apparently now taking their cues from these people who are more thinking with passion rather than logic, and that can be precarious. And then I also understand thats theres an entire union of doctors and nurses saying "You motherfuckers better not be the ones overrunning my hospital in 2 weeks making my life a living hell again." That doesnt make them racist, or anti-progress, or against getting rights for black people. That makes them regular ass humans who just went through hell and dont want to go right back.

Unfortunately I dont have an answer for our corona virus related problems, the same way I dont have an answer for our race related problems. Other than, lets wait and see? If a couple weeks go by and theres no spike, then I really do think we can rest assured that we did our job and beat this virus down. Because if protests cant spread it, nothing can. And if thats the case, then nurses and doctors and healthcare workers (and everyone) can stop their COVID worrying and life can resume. If it does spike, well then thats a SERIOUSLY, SERIOUSLY unfortunate side effect of a well intentioned movement. Just as the looting and the riots are. The same way small business owners getting ravaged have a right to be like "fuck this!" if the frontlines of hospitals revert back to how they were in April, they too have every right to be upset.

So just like I've been preaching with Black Lives Matter, I'll say the same thing to you about first responders in the medical field. Just shut up, realize your words and your message can carry weight and effect different groups in different ways, listen to them, and sympathize. Just because the internet and the news has moved on from what they all sacrificed for us doesnt mean you should. They're scared, they're conflicted, and dont know what they can express or not express without being chastised for it.

All I'm saying is dont forget what those people went through like, just a few weeks ago. And realize they are very scared they are gonna have to go through it again. Keep that in mind if you're talking to anyone in that industry, or when youre saying things on the internet that those people might see. They still deserve your respect and attention as well.